It's the the top 20! Huzzah! We're getting to some quality shows and one that can definitely be labeled a classic. Not much more of an intro in this post, but, as always, the rules to my list are here:


Spawn was an animated HBO show based on the Image comic book of the same name. It is dark, gritty and filled with adult situations. And not just Skinemax adult situations. This is a series that dealt with some heavy and disturbing stuff. But watching a man battle evil demons and protect a family that believes him dead and has moved on is interesting. It's too bad that this series ended after the third season right when an apocalyptic war between heaven and hell was promised.

If you don't know Star Trek then you've been living under a rock. The swashbuckling Captain James Tiberius Kirk, highly logical Mr. Spock, snarky Dr. Bones McCoy and a host of other characters are all aboard the Starship Enterprise searching the galaxy for adventure and green women to bone.
Star Trek famously used science fiction as way to explore current social issues (usually with a leftist slant...60s leftist). Not only would it use alien worlds as allegories for our own problems but it also presented Gene Rodenberry's ideal future. A time where Russians were no longer feared enemies and a black woman can have a strong, influential presence. It's easy to see why this show would be one of Martin Luther King Jr.'s favorites. Everyone was equal...more or less.
But, historical significance aside (and ignoring the now dated special effect), this show was simply good. It's clear I like my action but I still appreciate a show that stimulates the mind. So even the non-action episodes managed to keep my interest.

With the way this show has become a part of the modern zeitgeist and considering the fervent fan following it created it always amazes me that it only lasted three seasons. 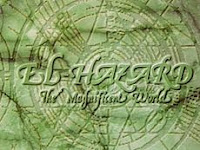 18. El Hazard: Three high school students and their degenerate history teacher end up being teleported to a fantasy world on the brink of war between human tribes and a race of bugs. Also, the teleportation process gives all the humans different super powers because...er...well...because super powers can only make things more awesome!


El Hazard is light hearted fun. My favorite part of this series is the history teacher. He's a chain smoking alcoholic who gets the most powerful ability of all the teleported humans: super human strength and athleticism. The catch? Nicotine and alcohol inhibit his powers. But he likes his booze and alcohol too much to give them up. It's all dealt with tongue-in-cheek but the idea of a person with super powers addicted to substances that take those powers away has always intrigued me.

17. Batman: The Animated Series:
Hot off the heels of Tim Burton's Batman movie Fox created Batman: The Animated Series to suck children in and cash in. Luckily, they ended up churning out a quality program.
Although toned down to be accessible to children this show still took its material seriously. At times its children’s cartoon nature would show through. Odd, impractical or downright zany scenarios would occur. But most of the time this show was Batman at its best: smart, serious at times, fun at other times and a good amount of action mixed in.
I've recently been watching some old episodes and one thing jumped out at me about this series that I never thought about before. Despite Batman having one of the largest array of well-known villains a surprising amount of episodes feature none of his usual rogues. There were episodes with a machine trying to replace humans with robots, man-bats, rival mob bosses, an evil mining facility owner, a ninja from Bruce Wayne's past and I could go on.

It would have been easy to just cycle through all the well known villains but they didn't. I'm not exactly sure what that means. Maybe it means that this show was less worried about cookie cutter episodes meant to pacify kids for a half hour and instead focused on simply telling good stories. Or maybe I'm just seeing what I want to see.

A knight, wizard, thief, elf, dwarf and cleric travel a land of magic to destroy an evil Queen and prevent a giant war from ravaging the island of Lodoss. Alright, so it sounds like a pretty formulaic fantasy series. But let's face it, formulas are formulas for a reason. When done right they work really well. Also, to be fair, some things happen in the second half that kind of shake things up.
In reading up on this series it turns out that it's based off an entire Japanese fantasy franchise consisting of novels, manga, RPGs and anime. There have been a few anime series and the one I'm referring to is the first one: Record of Lodoss War.
Obviously, from my description above, you pretty much know what you're getting into when you watch this series. The only thing I can add is to say that Record of Lodoss War is done very well.

I remember watching this series on DVD and I'd watch three or four episodes at a time. Then I'd go weeks before watching more of it. Every time I started watching again I kept wondering what took me so long. This show was just fun and engrossing.
Up next time: An American cartoon, a Japanese one (of course), another classic, a very surprising entry and the absolute hardest show to rank of any of these series.
Newer Post Older Post Home
Posted by Dr. Bitz at 1:37 AM