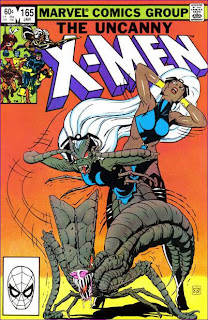 In a Nutshell
The X-Men deal with their impending deaths.

Plot
With the hole in the hull of the ship caused by Binary's abrupt departure threatening to suck the X-Men out into space, they work together to seal the breach with a piece of deck plating. Meanwhile, back on Earth, Moira brings Xavier a letter from Reed Richards asking for help with a young Vietnamese mutant named Karma. When Xavier declines, Moira suggests sending the girl to Magneto or Emma Frost's Massachusetts Academy if Xavier refuses to help. After Moira leaves, Professor X accepts that he has a responsibility to help young mutants, and calls Richards. Back in space, aboard a Shi'ar shuttle, Storm drifts through a nebula, trying to decide what to do with the Brood egg growing inside her. Suddenly, she begins to transform into a Brood, but when her ship breaches the nebula, the bombardment of starlight fills her with energy, reversing the transformation. Realizing what she has to do, Storm absorbs as much energy as she can and explodes her ship, killing both herself and the embryo.

In another part of the nebula, aboard Lilandra's ship, the rest of the X-Men work to repair the ship while struggling with the knowledge that they will soon die. As Kitty propositions Colossus, wanting to be with him before she dies, an image of Storm appears before them. Throughout the ship, Storm appears before each of her teammates at different stages of her life. Just then, one of the Brood's massive whale ships swallows Lilandra's ship. Finally, Storm appears as the X-Men knew her, explaining that it took some practice to be able to communicate with them properly. She tells them that the creature which swallowed the ship is an Acanti, and that she is no longer the Storm they knew: she is now one with the Acanti.

Firsts and Other Notables
Paul Smith comes aboard as the series' new regular penciller (with Bob Wiacek continuing to ink). Though his run will ultimately be brief, it is memorable, and he is routinely cited by many fans (including myself) as one of their favorite X-Men artists. Smith is also the first artist other than Cockrum and Byrne to draw the new X-Men.

Moira's conversation with Xavier about the fate of Karma sets up the events of Marvel Graphic Novel #4, in which Xavier re-opens the school to a new class of young mutants. Chronologically-speaking, that issue as well as New Mutants #1-3 all occur between this issue and Uncanny X-Men #167.

The Brood's whale-like living starships are named the Acanti in this issue; we'll learn more about them and their relationship with the Brood next issue.

A Work in Progress
Between last issue and this one, the X-Men have all changed into more civilian-style clothes in favor of their super hero costumes. Obviously because of the inclinations of the series' new artist, we can probably chalk it up in-story to the presence of the Shi'ar clothes-generating device.

Lilandra notes it is once again uncomfortable to teleport with Nightcrawler; as in issue #163, the Brood egg is making it more difficult.

Stevie Hunter is shown hanging out at the mansion, discussing Professor X's mental state with Moira, in a scene which chronologically occurs before New Mutants #1, somewhat setting up her involvement in that book (or, at least, reminding readers about the character; we are told again that an injury put an end to her professional dancing career). 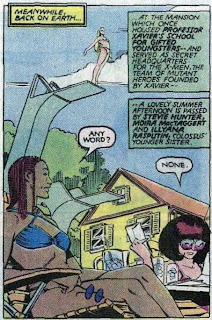 In the background of that same panel, we (somewhat) get our first instance of another unfortunate trope: the oversexualization of Illyana, as she appears wearing a bikini.

Moira's believes Professor X has never quite recovered from the loss of his legs, having always wanted to be more of a "front line" hero, setting up future developments. 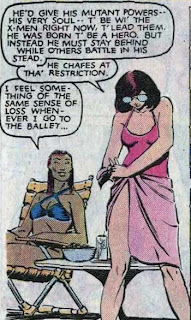 Xavier believes he's failed the X-Men just like he failed Jean Grey, but ultimately, he agrees to take on Karma as a pupil.

The Shi'ar shuttle Storm is aboard is the same design as the one Lilandra flew to Earth in her first appearances. 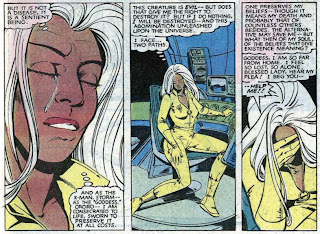 In light of their impending deaths by Brood egg, Lilandra and Cyclops come around to Wolverine's line of thinking regarding the Brood. 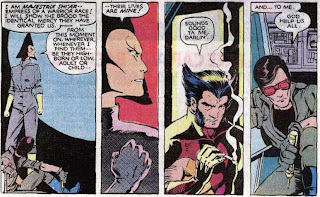 Nightcrawler, on the other hand, turns to prayer. 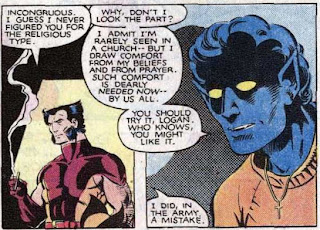 Which prompts another insightful theological debate with Wolverine.

It's noted that Kitty has turned 14, her birthday passing unnoticed while the X-Men are in space. 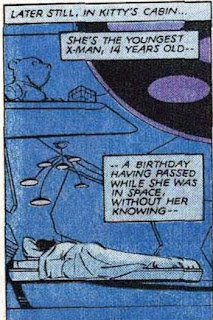 I Love the 80s
The opening pages of this issue are another textbook example of "every issue is somebody's first" style exposition, in which the characters displays their powers while fixing the hull breach.

His real power is awkward exposition (also note that Paul Smith draws Wolverine's cowl more like a helmet, as John Byrne did).

Claremontisms
Cyclops' blast is described as "nigh irresistible". Almost "nigh invulnerable", but not quite.

Artistic Achievements
For whatever reason, I've always liked the way Paul Smith draws hair. I also like that he isn't afraid to draw curvy women.

Young Love
Faced with death, Kitty more or less tells Colossus she wants to have sex with him before she dies, and while he kisses her, he tells her despite their situation her age does matter, and he still hopes they'll find a way to avoid their fates. It's an easy scene to have some fun with, but it's also quite well done. 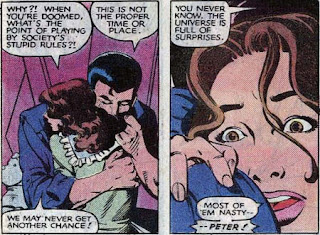 For Sale
It's been awhile since we had a Daisy ad, but this one promises a free hat and backpack! 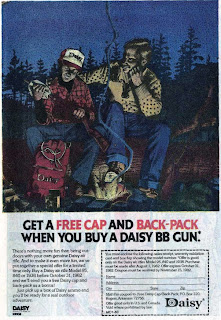 There's also an ad for the New Mutants series. 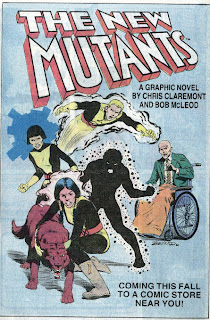 Finally, we get one of the first ads for a licensed Marvel video game. 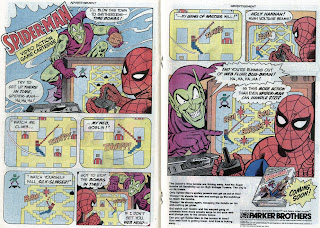 Teebore's Take
This is my favorite issue of this story. After revealing to the X-Men last issue that they are all carrying a lethal Brood egg (and after resolving the relatively pointless action cliffhanger and spending a few pages setting up New Mutants), Claremont settles in to depict the X-Men struggling with the knowledge that they are about to die, all ably depicted by incoming series artist Paul Smith. In fact, the entirety of the art team does a masterful job of adding to the tone of the issue: the bright colors and sci-fi trappings of Lilandra's ship lend the story a cold, clinical feel. The X-Men are alone, adrift, and you can almost hear the empty vastness of space and their ship as the characters grapple with their impending deaths. As Storm tries to reconcile her desire to destroy the evil growing inside her with her vow to never kill, Cyclops and Lilandra come down on Wolverine's side, determined to make the Brood pay with their final breaths. Nightcrawler first prays, then enters into a theological debate with Wolverine before the pair engage in some gallows humor whilst searching for a brew, a sequence which does an excellent job of deepening their friendship in just a few panels. And in the issue's strongest scene, Kitty and Colossus, perhaps the most innocent of all the X-Men, discuss the finite nature of existence, before Colossus' gently rebuffs Kitty's advances because he refuses to give up his hope that the X-Men will find a way to cheat their fates yet again. It is simply Claremont at his best, using a comic book-y plot as a springboard for strong character work that depicts the X-Men as three dimensional, fully realized individuals.

Next week, the X-Men take the fight to the Brood in Uncanny X-Men #166.
Newer Post Older Post Home
Posted by Austin Gorton at 8:00 AM