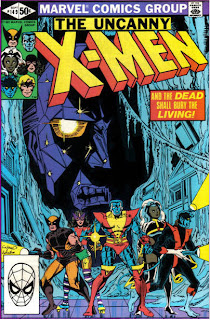 "And the Dead Shall Bury the Living!"
September 1981

In a Nutshell
The X-Men investigate Magneto's old base.

Plot
Professor X is studying his files on Magneto, worried that the villain's relative silence of late means he's planning something big. Kitty interrupts him to show off her new costume, inadvertently phasing through his computers and damaging his research. He angrily sends her away, then calls the X-Men, who are still repairing the Danger Room, to a briefing. The X-Men are sent to investigate Magneto's antarctic volcano base, his last known location. En route, the X-Men discover a stowed away Kitty. She is scolded, but in the interest of time, the team doesn't turn back. Arriving at the base, they find it seemingly deserted but in better shape than they left it.

Spreading out, Colossus and Kitty are attacked by a misshapen Garokk, rescued by Magneto and placed in charge of the complex. Kitty phases through him, learning that doing so causes him pain for some reason, but Garokk punches through a wall, allowing lava to flow into the complex. Storm calls up a localized hurricane which freezes the lava and leaves her exhausted. Wolverine and Nightcrawler attack Garokk but he grabs Storm, intent on tossing her down a chasm, just as she failed to rescue him from a similar fate. Kitty phases through him once more, and all three tumble into the chasm, landing on a rocky outcropping. Garokk lunges for Kitty but misses, falling off the ledge. Nightcrawler teleports down and retrieves Storm while Kitty levitates out of the chasm. As they fly home, the X-Men realize that the effort Magneto took to clear and protect his old base confirms Professor X's suspicions. Meanwhile, in the Bermuda Triangle, Cyclops and Lee have received food, clothes and shelter from Magneto, but Cyclops remains worried that Magneto will learn his identity. However, Magneto reveals that he has already recognized Cyclops, and that Cyclops can remove his blindfold, for his power will not work so long as he is Magneto's guest, leaving him completely at Magneto's mercy.

Firsts and Other Notables
This issue is notable for introducing Kitty Pryde's horrible (and thankfully short-lived) rainbow roller skate costume. It's truly terrible, but in Dave Cockrum's defense, the story suggests it's supposed to be dreadful: it's meant to represent Kitty's youthful idealism, which ties in with Kitty's role in this story, and the other characters acknowledge that it is an ugly costume. Still, considering Cockrum had Kitty written out of the Doom/Arcade story because he didn't have a handle on the character, if this costume is him coming to terms with Kitty as a character, he needs to keep working at it. 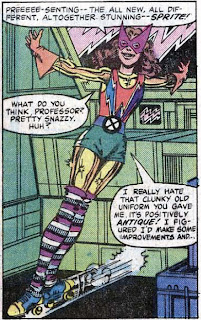 Garokk the Petrified Man, last seen falling down a seemingly bottomless chasm after attempting to takeover the Savage Land in issue #116, makes a return appearance, though he looks vastly different, suddenly a hulking monstrosity as opposed to the rather slight (albeit stony) figure he cut in his last appearance. It is revealed that Magneto saved his life and put him in charge of guarding the remains of Magneto's antarctic volcanic lair. 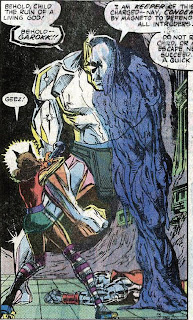 A Work in Progress
The X-Men are still fixing the Danger Room, say it with me, as a result of the N'Garai demon attack in issue #143 (this really has become, as Blam suggested, the "as a result of injuries suffered in issue #119" of this run, something the caption even acknowledges).

Professor X, studying his files on Magneto, notes that he knows little of Magneto's background, which later stories will prove to be untrue.

Xavier also mentions that he and Magneto are very alike in some ways; while the actual reveal of their past together and Magneto's transition away from outright villainy are still a ways out, this idea represents a small step in that direction.

Kitty is told that an individual costume is something X-Men earn and is awarded at graduation, though she continues to wear it throughout the issue.

We are reminded that when Kitty phases through electronics, she causes them to short circuit, on a grander scale then when she shorted out the lock to Wolverine's cage in issue #131.

That said, when Kitty is later shown to hurt Garrok by phasing through him, it doesn't make a lot of sense, since he's, you know, made of rock. This particular trick is never really explained. 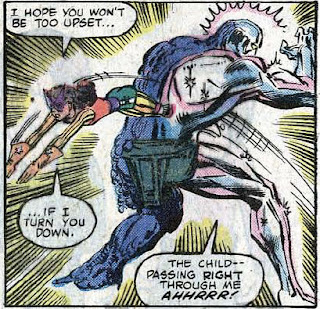 Storm mentions that Angel's experience would come in handy against Magneto, which seems like Claremont showing a way the character could have stood out despite the redundancy of his power...

In a nice bit of characterization, Nightcrawler comes across the head of the Nanny robot which held the X-Men captive in issue #113 and makes a joke, while Wolverine angrily destroys the head. 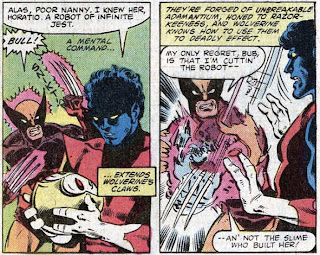 Nightcrawler teleports someone along with him for the first time, and the strain almost kills him. 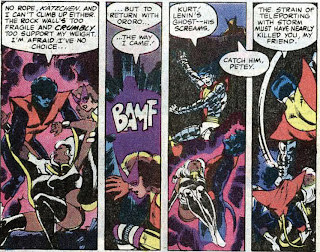 I Love the 80s
Seems like Professor X needs to take more regular backups of his computer...

Just to make it clear: Kitty spends the vast majority of this issue wearing roller skates.

Lee asks Scott why Magneto scares him so much, suggesting she's not at all wary of the mysterious guy with the funny name wearing a helmet and cape who is the sole resident of an island city featuring enormous statutes of Lovecraftian creatures, which appeared from nowhere overnight (and also suggests that she's never read or heard any of the news reports pertaining to Magneto's various attacks on humanity). 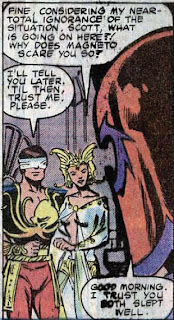 "Professor Xavier is a Jerk!"
Professor X telepathically orders Kitty from his office so hard it hurts her. 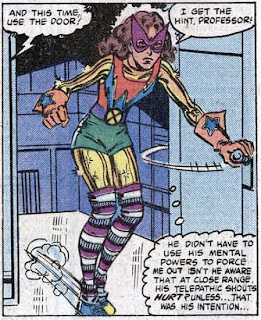 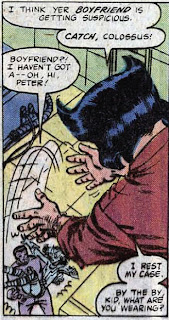 It's in the Mail
The "next issue" box at the end of the letters page seems to refer to the events of this issue, suggesting the page was originally meant to run in last issue (the letters mostly refer to issues #141 and #142, suggesting the office is a bit behind...).

Teebore's Take
In this issue, Professor X decides that since it's been awhile since Magneto did something, he must be plotting some new villainous scheme, so the X-Men are sent to Magneto's last known location to check things out. This bit of plotting falls somewhere between "metatextual" and "lazy", as Claremont gears up for the villain's return in the series' 150th issue. The story that follows isn't terrible: bringing back Garokk, instead of introducing some one-off new cannon fodder villain, ties it in with the book's history, and Claremont gets some mileage out of Storm's lingering guilt over failing to save Garokk at the climax of the last Savage Land story.

But it's hard to take much of this very seriously whilst Kitty is rollerskating through Magneto's old lair wearing that hideous costume, and Garokk lumbering at the X-Men is a far cry from Magneto going toe-to-toe with the entirety of the Claremont/Byrne line-up. The law of diminishing returns is in effect: the last time the X-Men were in this place, it was during one of their most classic stories, and they were locked in a battle in which the tension was palpable (despite the subconscious safety net inherent to all characters starring in an ongoing narrative). The stakes just don't seem as high now. Again, there's nothing wrong with this issue; it's a nice bit of average super-heroics, with the now-usual moments of characterization helping things along. But it suffers by being placed in such stark comparison to such a classic story.

Next Issue: Avengers Annual #10
It's an Avengers annual but our merry mutants take center stage in an issue that introduces them (and us) to everyone's favorite Southern belle, Rogue.
Newer Post Older Post Home
Posted by Austin Gorton at 10:00 AM