In a Nutshell
The X-Men and Teen Titans team-up to defeat Deathstroke, Darkseid and Dark Phoenix.

Plot
At the Source Wall, New Gods Metron and Darkseid strike a deal: Darkseid receives the Psychon-Wave device while Metron receives a Omega-Phase Helmet that will allow him to pierce the Wall. Darkseid goes to Earth, and uses the Psychon-Wave to extract from the X-Men their memories of Phoenix. The X-Men are awakened by a screaming Kitty, just as an apparition of Phoenix appears before them and begs for their help before disappearing. At Titans Tower, Raven has a prophetic dream of a fiery bird attacking her. Recognizing it as the Phoenix, Starfire summons the rest of the team. As the Titans come together, the X-Men visit Jean's parents, who received a similar visitation. Just then Professor X alerts them to reports of strange occurrences at places where Phoenix manifested her power. The X-Men depart to investigate, while Starfire tells the Titans about Phoenix, and Deathstroke the Terminator is sent by Darkseid to the "last siphon point".

The Titans track Phoenix to the X-Men and attack the mansion, but only Professor X is there. Suddenly, a group of Para-Demons attack, thinking the Titans are the X-Men, and capture them. In New Mexico, Deathstroke is using a psi-phon to gather up Phoenix's residual energy when the X-Men attack. Though they destroy the machine, they are defeated by Deathstroke and taken to the Source Wall, where Darkseid and the captured Titans are waiting. Darkseid uses the X-Men's memories and the gathered energy to recreate Dark Phoenix, planning to use her to transform Earth into a hellish planet under his control. When Darkseid and Dark Phoenix leave for Earth, the heroes' restraints vanishing. Combining forces, the two teams manage to locate Metron's Moebius Chair, capable of interdimensional travel, and follow Darkseid to Earth. 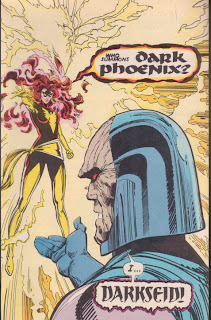 They track down the villains and attack, but Dark Phoenix has already begun transforming Earth. Professor X and Raven use their powers to drain Dark Phoenix's energy, causing her to reabsorb the energy she unleashed, stopping Earth's transformation, but it isn't enough to save her. She attempts to use Cyclops as a host body, but his love for Jean is too strong, and she is forced to flee him. Angry that she was resurrected and teased with life, she uses the last of her strength to attack Darkseid, taking him back to the Source Wall and imprisoning him there. As the heroes celebrate their victory, they wonder who sent the Phoenix apparition, while at the Source Wall, Metron returns from his journey, pleased with the knowledge he acquired.

Firsts and Other Notables
By no means the first Marvel/DC crossover, this is the first appearance of the X-Men in such an issue. With both the X-Men and the Titans the stars of some of their respective company's best selling titles at the time, it made sense to pair the two together. This issue is written by Chris Claremont and was distributed by Marvel; a follow-up, to be written and drawn by the regular New Teen Titans team of Marv Wolfman and George Perez, and distributed by DC (and rumored to feature Brother Blood and the Hellfire Club as the villains) was planned but never came to fruition. 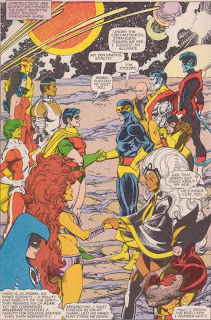 This issue is drawn by Walt Simonson, husband of editor Louise Jones, just prior to the start of his legendary run on Thor. He will shortly hereafter fill-in for Paul Smith on an issue of X-Men, and eventually become the regular penciller on future X-Men spinoff X-Factor. He is joined by longtime former X-Men inker Terry Austin.

Technically speaking, this issue exists outside regular X-Men continuity, occurring on a world in which the Marvel and DC characters co-exist (Robin mentions going to either the Justice League or the Avengers for help). This world has been deemed Earth-7642 for the truly minutiae-obsessed.

For any Marvel Zombies unfamiliar with the New Teen Titans, they are a group of teenaged heroes, many of whom are sidekicks to heroes in the Justice League (Robin/Batman, Kid Flash/Flash, etc). Like the X-Men, the group has been around since the 60s and, at the time this issue was published, recently saw an influx of new (non-sidekick) members (such as Starfire and Raven) join their ranks, thus re-branding them the "New Teen Titans". Inspired in part by the style and success of the "New X-Men", New Teen Titans also features strong characterization and ongoing subplots alongside traditional super-hero action, which, like X-Men at Marvel, will be an influence on the rest of DC's superhero titles thanks to the critical and commercial success of the title.

The Titans chief antagonist is Deathstroke the Terminator, a mercenary who utilizes 90% of his brain to gain enhanced abilities. As grim'n'gritty comics gain popularity in the 80s and 90s, his edges will gradually soften until he becomes more of an an anti-hero and becomes a representative of various 90s comic book trends alongside characters like Cable, Lobo or Venom. Darkseid and Metron are both part of Jack Kirby's "New Gods" saga, the story of a group of god-like beings from the Fourth World who end up drawing Earth into their ages-old conflict. The former has dreams of conquest while the latter desires knowledge. The Para-Demons are Darkseid's lackeys/shock troops. Thanks in part to Super Friends (as well as a some truly good stories) Darkseid is one of DC's better known villains outside of Lex Luthor and the Batman rogues.

A Work in Progress
At one point, Cyborg swings by the wreckage of the skyscraper destroyed at the end of X-Men #155, giving a rough estimation of when this issue occurs.

Claremont hits on a couple X-Men staples right at the beginning: Xavier admonishing Wolverine for calling him "Chuck", Colossus being described as "nigh-invulnerable" and Cyclops using his power to shoot pool. 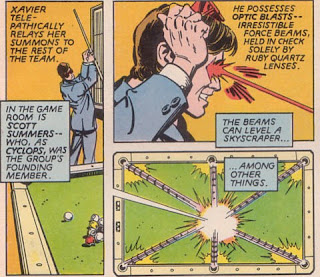 Wolverine mentions he doesn't like his claws, which is, I think, the first time that's ever been mentioned.

The alien Starfire knows of Phoenix, her people having been visited by Lilandra and warned of her threat during "The Dark Phoenix Saga". 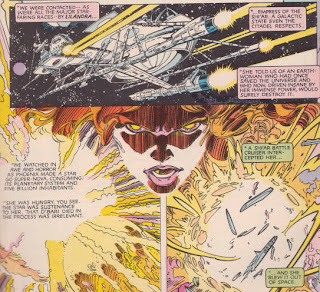 Starfire has a "warrior rage" to match Wolverine's "berserker rage".

At this point in his career, Robin has graduated from "Boy Wonder" to "Teen Wonder".

Frost Industries is name dropped as one of the location where Deathstroke gathered lingering Phoenix energy, and the X-Men battle Deathstroke atop the butte in New Mexico where Cyclops and Phoenix had sex in issue #132.

Storm manages to trigger an avalanche that traps, but doesn't kill, a group of Para-Demons. 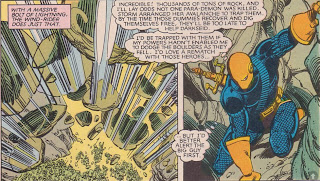 I Love the 80s
Deathstroke mentions that he uses the full capacity of his brain, instead of the only 10% most other people use, giving him superhuman abilities. The whole "humans only use 10%" of their brain statistic is one of those things I totally bought into as a kid, thanks in part to characters like Deathstroke, and was bummed to learn it had been debunked (studies show we do, in fact, use the vast majority of our brains on a regular basis, so there's no special abilities locked away in there...).

Also, Deathstroke, despite being the sworn enemy of the Teen Titans, knocks Robin out but doesn't kill him. And later, Darkseid and Dark Phoenix not only leave the X-Men and Teen Titans alive, but presumably free them before leaving them stranded at the Source Wall. 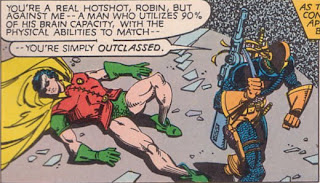 Claremontisms
This issue features yet another faux return of Phoenix, a little more genuine than Kitty's ruse in #157 but still not a technical resurrection (as its out of continuity and self-contained). He also once again refers to Phoenix' power as a symphony.

Young Love
Colossus gets mad at the thought that someone may have hurt "Katya".

Later, Kitty flirts with Changeling and has him morph into a large dragon, upsetting Colossus that she shared their "special character" with the Titan. 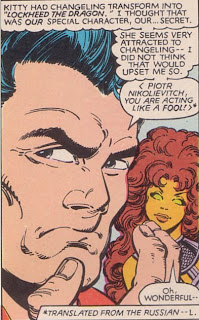 Turnabout is fair play though, as Kitty becomes jealous when Starfire plants one on Colossus to learn Russian (yes, that is how her power works). 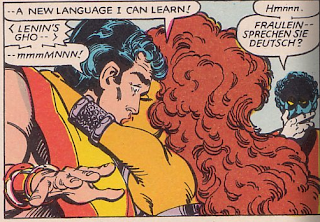 Claremont confirms that Cyclops and Phoenix did indeed consummate their love on that New Mexican butte.

For Sale
This issue is ad-less, save for a DC house ad on the inside back cover. 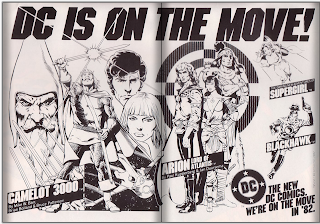 Chris Claremont on the differences between the X-Men and the Teen Titans
“As far as characterization [the X-Men and Titans are] not really [alike]. One of the things I discovered when plotting the X-Titans was that if there are similarities, they are superficial physical similarities, and once you go beyond that, the differences are really quite dramatic. I find the X-Men much richer and more three-dimensional and more easily identifiable than the Teen Titans. But I also think Marv [Wolfman] would probably find the Teen Titans richer and more three-dimensional and enjoyable than the X-Men. This is because I know who the X-Men are and he knows who the Titans are.”

Teebore's Take
While in the grand scheme of things, this issue isn't terribly important to the ongoing narrative of X-Men (what with it technically being out of continuity) it is nonetheless tremendously fun. Most intercompany crossovers usually are, just for the sheer novelty of seeing Marvel and DC's characters interact with each other (for moments like, here, Cyclops and Robin shaking hands or Wolverine taking on Deathstroke), but Claremont ups the ante with a big, cosmic story that allows Walt Simonson to simply go nuts, lending the book a kind of manic energy. Claremont uses the cosmic setting and narrative freedom to bring back Dark Phoenix, in a form, without fear of retribution from Jim Shooter (and while Magneto probably maps more closely to Deathstroke the Terminator as the X-Men's chief villain, using Dark Phoenix makes sense given both the involvement of Darkseid and because she was the villain of the story that really put the X-Men on the map). Claremont does his best to integrate the Teen Titans into the story, and most get a character beat that at least seems genuine based on my relatively limited understanding of their characterization at this point in their histories, but at the end of the day, this is first and foremost an X-Men story, one that represents well what the main title was doing at the time: mixing Silver Age energy with Bronze Age characterization to create a fun and engaging story. In that regard, reading it at this point in our "X-amination", it's really the swan song of Claremont's traditionally superheroic take on the characters.

Next Issue
We first return to the regular series with Uncanny X-Men #168, then take a look at the seminal "God Loves, Man Kills" in Marvel Graphic Novel #5.
Newer Post Older Post Home
Posted by Austin Gorton at 12:00 PM