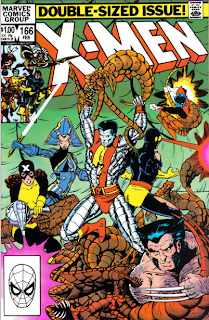 In a Nutshell
The X-Men defeat the Brood.

Plot
On the planet Madrizar the Brood work to enslave another Acanti when an enraged Binary appears and attacks the facility. Storm appears before her, and she brings Binary to the Acanti where the X-Men are waiting. Storm then tells the X-Men how the Brood enslaved the Acanti, including their Prophet Singer, keeper of the Acanti's racial soul. Even after his death, the soul remained captive on the Brood homeworld. Thus, the Acanti are unable to free themselves from the Brood. She explains that the Acanti in which they reside is the first new Prophet Singer in generations, but was born prematurely when it's mother was captured by the Brood. When the Acanti came across Storm's dying form in space, they bonded her consciousness to the newborn, giving him the awareness he needed to survive while his mind developed in exchange for using his natural healing abilities to repair Storm's body. Storm offers her teammates the opportunity to spend their last moments not on vengeance, but fighting to help free the Acanti from the Brood. 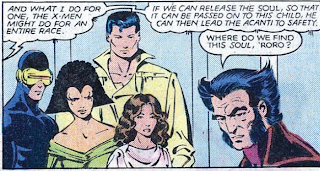 The X-Men agree and devise a plan to have Storm and Binary lure the Brood away from their homeworld while the rest of the X-Men teleport down and free the Acanti soul. Wolverine worries that the eggs inside the X-Men could hatch at any time, but is unable to kill them to prevent it. The X-Men launch their attack, and while the majority of the Brood fleet takes the bait, an embryo within one of the X-Men telepathically alerts the Brood Queen to the X-Men's true intent. As the X-Men fight their way towards the soul, Wolverine notes that Cyclops is acting more hostile towards him than usual, and Kitty gets separated from the team. In space, Storm and Binary are about to be overwhelmed when the Starjammers, having spent the last few weeks searching for the X-Men, drop out of warp. Back on Broodworld, Wolverine realizes Cyclops has begun transforming into a Brood, and when the Queen and her warriors arrive, the X-Men are easily overpowered.

Elsewhere, Kitty is saved from a squad of Brood by a small purple dragon before reaching the Acanti soul. When Cyclops' consciousness surfaces for a moment, Wolverine takes advantage of his struggle to free himself and take the Queen hostage, forcing the Brood to release the rest of the X-Men. They reach the Acanti soul just as Kitty emerges. The X-Men enter the soul, but the Queen and the embryos inside the X-Men begin corrupting it, triggering the X-Men's transformations. Wolverine moves to kill the X-Men but is stopped by Binary, who uses her power to give the soul enough energy to overcome the Brood's corruption and free itself. In the process, it destroys the embryos inside the X-Men and turns the Brood Queen to crystal. Moments later, the X-Men are teleported aboard the Starjammer just as Broodworld, disrupted by the flight of the soul, explodes. Storm rejoins the team, her body fully healed, and the X-Men celebrate their victory, but Wolverine tells them that before the Brood Queen died, she boasted that a remaining Brood egg threatened Earth itself. He figures there's only one person who could be hosting it: Charles Xavier.

Firsts and Other Notables
Though he goes unnamed, this is the first appearance of Lockheed, Kitty's pet dragon. A divisive character amongst fans, many feel he is the final nail in the coffin of "Kitty as a normal girl", and it is ridiculously twee that a character as Mary Sueish as Kitty has a pet dragon. But fans who grew up with the character (like myself) tend to be more forgiving. Personally, I find Lockheed kind of charmingly adorable, one of those "only in comics" kind of things, even while recognizing the idea of Kitty having a pet dragon is patently ridiculous and problematic.

It's revealed that Professor X is also carrying a Brood egg, which explains the cause of his coma during issues #157-161. 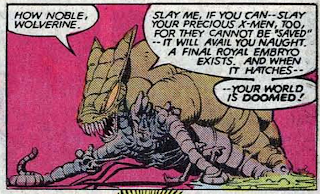 As you can likely tell from the plot, this is a double-sized issue.

Once again, I urge you to read Jason Powell's post on this issue; he gets to the heart of the matter much better than I do, and proposes an idea (that this issue, one hundred removed from the end of the original X-Men's run, marks the end of Claremont's exploration of traditional super-heroics) that goes a long way to explain why I enjoy the upcoming 40 or so issues so much, and while those same issues can equally be a turnoff to some.

A Work in Progress
Carol apologizes to the X-Men for going berserk and causing explosive decompression.

It is revealed that the body of the Acanti which forms the Brood's capital city, as seen in issue #162, was the spiritual leader of their race, the Prophet Singer. 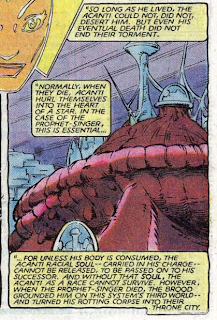 Wolverine is given a final opportunity to slay the X-Men before they transform into the Brood, but can't bring himself to do it, despite his fear that their upcoming transformation could jeopardize their mission. 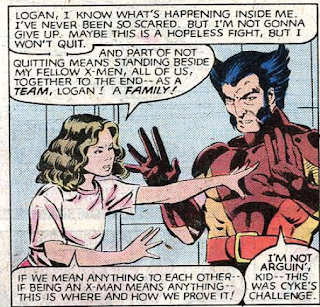 Cyclops apologizes to Storm for usurping her leadership position. 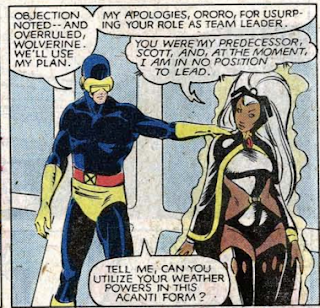 Later, Wolverine begins to suspect that Cyclops is transforming into a Brood when he realizes he and Cyclops are sniping at each other like they did in the old days. 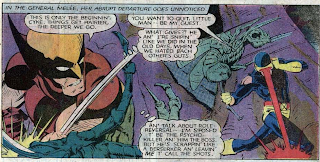 Cyclops expresses concern for the destruction of the Brood's planet.

I Love the 80s
When teleporting down to the Brood throneworld, Kitty references Star Trek, to Scott's befuddlement. 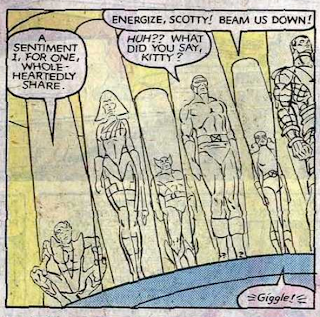 I like the little lightsaber dealy Lilandra wields throughout this issue. 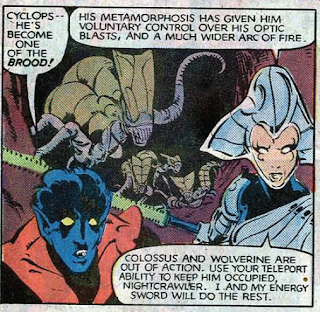 Claremontisms
Colossus is "nigh-invulnerable" once again.

Artistic Achievements
Smith does a great job on Brood-ified Cyclops, and in the depiction of how that physical change affects his eye blast.

The Best There Is At What He Does
Wolverine dives into one of Cyclops' optic blasts to free himself from his shackles, noting he turned at just the right moment to prevent himself from being turned into nothing but adamantium bones and pulp. Later, Wolverine's fight with the Brood Queen leaves him requiring medical attention from Sikorsky. 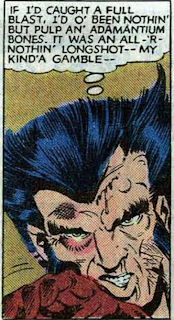 For Sale
It looks like a Hostess ad, but it's actually for something called the "Magic Snake Puzzle." 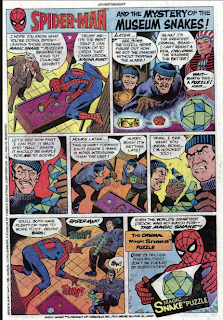 There's also an ad for Dark Crystal, a rare case of a definitive 80s movies of which I'm not a big fan. 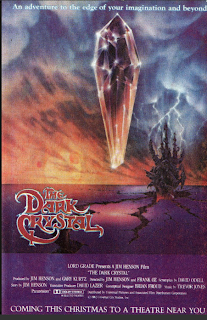 Teebore's Take
Though the story officially concludes next issue, this essentially marks the end of the X-Men's latest sojourn in space. The undercurrent throughout this story has been the X-Men's stance on killing their enemies, with each character expressing an opinion on the matter and in some cases, altering it as their situation changed. Now, through Storm, Claremont re-contextualizes that debate, and offers a third objective: fight the Brood, maybe even kill them, but in the service of freeing an enslaved people rather than sheer vengeance. The Acanti are thus positioned, essentially, as a deus ex machina, but not just for the plot. They are a thematic deus ex machine of sorts, allowing the X-Men to once again act as superheroes. That's, well, at the very least, it's very interesting.

However, most importantly, this last minute change of plans doesn't invalidate the previous moral quandaries through which the characters navigated. At the end of the day, their opinions, changed or otherwise, regarding whether the Brood deserve to be killed, remain the same. The characters have simply found a way to stay true to their overall mission: sacrifice, not in the name of vengeance, but in the name of freeing the oppressed. Right up to the very end, Claremont manages to never lose this thread, and it's what helps elevate this story (a bit over-long though it may be) above the previous Brood arc, as well as many other "X-Men in space" stories. At the end of the day, Claremont has, via a story involving alien bugs and space whales, crafted a treatise on the morality of superheroes. If this is, as Jason Powell asserts, Claremont's final, definitive statement on traditional superheroes, it's a strong one.

Next Issue
Tomorrow, the New Mutants try to hold their own against the Brood-possessed Professor X in New Mutants #3. A week later, the X-Men finally return home in Uncanny X-Men #167.
Newer Post Older Post Home
Posted by Austin Gorton at 8:00 AM