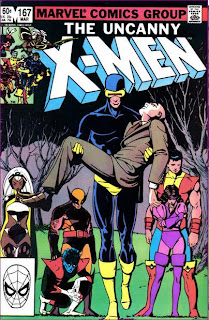 In a Nutshell
The X-Men return to Earth.

Plot
The New Mutants are watching Magnum P.I. when the X-Men burst into the mansion, hoping to take Professor X by surprise. The New Mutants fight back, but Kitty manages to sneak into Professor Xavier's study. However, she hesitates firing on him, at which point he transforms into a Brood Queen and attacks her. As the Brood Queen taunts the X-Men, Cyclops blasts her outside. The X-Men give chase, and their combined efforts are enough to allow Professor Xavier's lingering consciousness to briefly take control of the Brood's body. He begs the X-Men to kill him before the transformation is complete, but Cyclops is unwilling to do so, determined to find another way to resolve the situation. 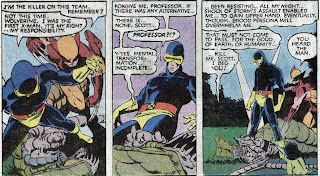 Later, aboard the Starjammer, the X-Men wait as Sikorsky and Moira attempt to clone a new body for Professor X in order to transfer his mind into it. Corsair declares he intends to remain in space with the Starjammers, but tells Cyclops he wants to take his son to meet his grandparents first. Meanwhile, Gladiator of the Imperial Guard arrives to tell Lilandra that Deathbird has declared herself Empress, causing Lilandra to wonder if she has the strength to mount another rebellion. With the cloning procedure a success, the X-Men gather as Professor X attempts to walk on his new and undamaged legs, but psychosomatic pain prevents him from doing so; he'll have to work to overcome it. Professor X then formally introduces the X-Men to the New Mutants, and declares that, with students her own age at the school now Kitty is to be demoted to the New Mutants.

Firsts and Other Notables
Professor X's mind is transferred into a new cloned body this issue, which will (eventually) enable him to walk once again. Thus, this marks the beginning of a unique era for the book, one in which Xavier's direct involvement with the team is increased, rather than the usual plot devices that see him sidelined, depowered, or written out for issues at a time. It also means that, to this day Professor X is technically a clone, something that isn't referenced very often, probably for the best.

This issue marks the first meeting between the X-Men and New Mutants. As the two teams will now be sharing the mansion, the next forty or so issues of both titles will often feature various members of both teams weaving in and out of their respective books. Also, a footnote in this issue directs readers to New Mutants #3, though that issue wasn't on sale until a month after this one.

Cyclops learns that his grandparents, Corsair's parents, are still alive. 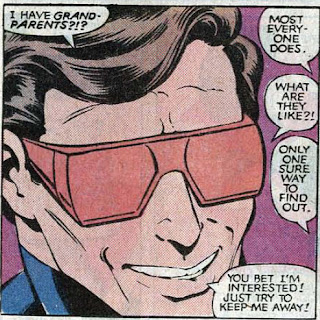 Gladiator arrives aboard the Starjammer, looking for Lilandra. He mentions encountering the Fantastic Four, a confrontation that was depicted in Fantastic Four #249-250. He then informs Lilandra that Galactus had recently come to Earth to die, but Reed Richards worked to save his life, as seen in Fantastic Four #242-244. This prompts Lilandra to contact Reed and essentially browbeat him for saving Galactus.

Not surprisingly, some combination of Claremont's thinly-veiled criticism of the story and his use of the FF without running it by the Fantastic Four editorial team irritated the book's writer, John Byrne, which led to the classic "Trial of Reed Richards" story in Fantastic Four #262, in which Reed is put on trial by a galactic tribunal for helping Galactus and ultimately acquitted when it's determined that Galactus isn't evil. Read more about it here.

According to the Marvel Index, between this issue and X-Men Annual #6, the X-Men appeared in the three issue Contest of Champions limited series. Notable for introducing a variety of international heroes that never quite took off (such as Shamrock or Peregrine), the story found the heroes of Earth pitted against each other as pawns in a cosmic game being waged by Elder of the Universe Grandmaster against Death for the life of his fellow Elder, the Collector. Published in the summer of 1982, it is often cited as Marvel's first limited series, though I have no idea if that's accurate (it seems a dubious claim; if it did beat the Wolverine limited series to shelves, it did so only by a month or two at most). The X-Men's involvement in the story is fairly limited, and never referenced in the main series, which is why I chose not to cover it.

A Work in Progress
Kitty debuts a new pirate-themed costume this issue, though it doesn't stick around long. She's also wielding one of the Brood's blasters. 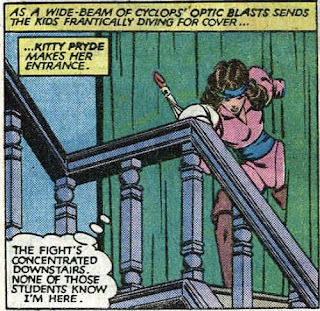 As the X-Men burst into the school, Sam instinctively takes charge. 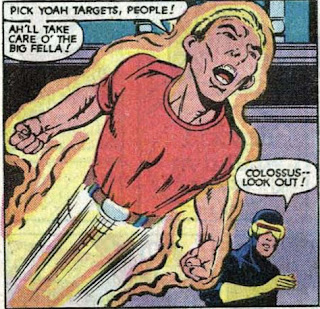 Kitty wonders if Professor X was subconsciously influenced by the Brood Queen inside him to recruit the New Mutants as potential Brood hosts.

Storm is unable to kill the Brood Queen, while Cyclops compares Professor X's situation to Jean's, refusing to once again to accept the idea that someone he cares about has to die. 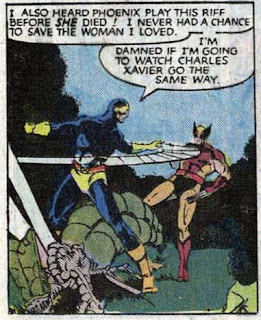 Moira and Illyana join the X-Men and the New Mutants aboard the Starjammer, presumably beamed up from Muir Isle, though Banshee apparently stayed behind. 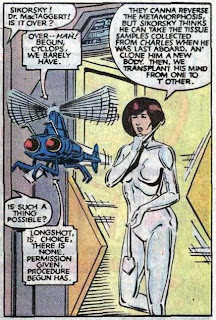 Storm tries not to be bothered by the fact that Kitty overlooks her after she wakes up from her injuries.

Nightcrawler worries about the New Mutants accepting his appearance.

When Lilandra is told about Deathbird usurping the throne, she comments that madness seems to run in her family. 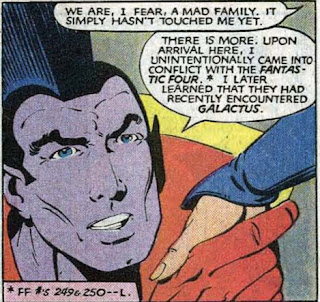 Cyclops says that Professor X has been like a father to him.

Corsair declares that once he's reunited Scott with his grandparents, he intends to go back into space with the Starjammers. 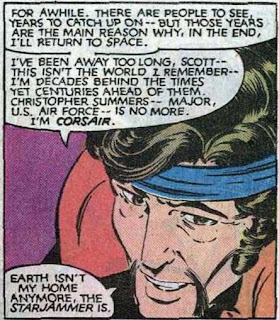 Professor X demotes Kitty to the New Mutants at the end of the issue, saying it was a mistake to put her on the team considering the risk involved. 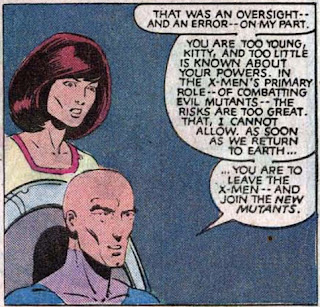 I Love the 80s
The New Mutants, are, of course, watching Magnum P.I as the issue opens. 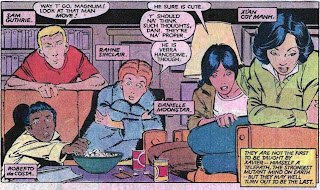 Claremontisms
Sam says he's "pretty much" invulnerable as Cannonball, which is almost "nigh invulnerable" but not quite. Also, Cyclops says that as the first X-Man, killing Xavier is "my right - my responsibility", another favorite phrasing of Claremont's.

These two panels, as Cyclops declares his intention to spare Xavier and try to find a way to save him, are two of my favorite panels in the entire X-Men pantheon. For anyone who says Claremont is incapable of brevity, these two panels manage to express the personalities of five different characters with just a handful of words. 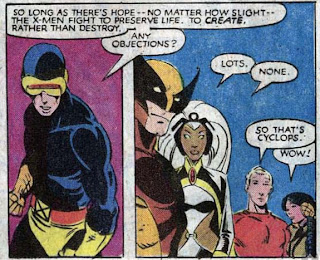 Artistic Achievements
The cover of this issue is an homage to X-Men #136, both of which are referencing Michelangelo's "Pieta".

The Awesome and Terrible Power of CyclopsDani pulls an image of Cyclops' greatest fear: losing control of his power. 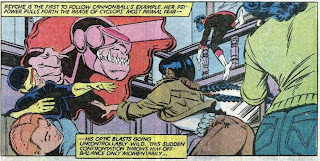 For SaleThis video game ad reminds me of some of the games referenced in Ready Player One. 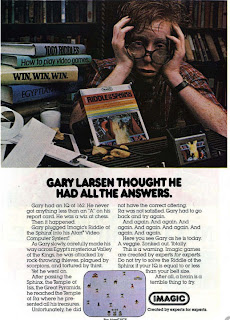 Teebore's Take
This is one of my all time favorite single issues of X-Men. As I went about amassing back issues as a kid, my run of Classic X-Men ended with "The Dark Phoenix Saga", leading to an ensuing gap that ended with this issue. As a result, I read it numerous times through the years without having read the issues which precede it, and it's a testament to its quality that I never had a problem coming in on literally the last chapter of a story. The front half of the issue features a dynamic action sequence, masterfully choreographed by Paul Smith, which makes the situation and the X-Men's objective crystal clear, regardless of what happened in previous issues. The X-Men burst into the mansion, systematically overcoming the New Mutants and taking on the Brood-possessed Professor X, culminating in the final moral debate of the story, as Storm and Cyclops find themselves unable to kill the creature that was once their mentor. The second half of the issue is handed over to sequences of characterization and subplot development, pages which taught me that the quieter moments between characters matter as much as, if not more than, the super-powered slugfests. This seamless blend of action, character and subplot has become the bread-and-butter of X-Men at this point.

This also heralds the beginning of a new approach to the title by Claremont. With the long-running Brood story firmly in the rear-view mirror, we now enter a prolonged period in which Claremont largely eschews multi-part, long-form story arcs in favor of standalone or two issue stories that are connected by ongoing subplots and characterization. Instead of presenting a series of serialized stories, this creates an interwoven narrative tapestry. Each issue starts to feel less like "chapter X in story Y" and more like just another twenty-some page glimpse into the lives of these characters (who are superheroes, after all, so we still get our quota of action). It's a dynamic and unprecedented approach to the series, and one that will be, for good and bad, hugely influential on superhero comics. It's also one of the things I love about this era of the title, and this issue marks the beginning of my personal golden age of X-Men.

Next Issue
Tomorrow, Dracula does what he does best (returns) in X-Men Annual #6. And next week, we'll get one last look at Dave Cockrum drawing the X-Men in Special Edition X-Men #1.
Newer Post Older Post Home
Posted by Austin Gorton at 8:00 AM