Not a lot this week, as I watched very little TV worth discussing between work, the run-up to Christmas and the onset of a cold. 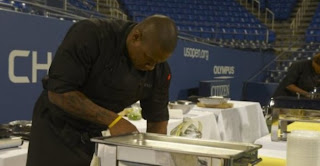 This episode showcased another fun and interesting challenge. By keeping the teams out of the loop, judging-wise, the resultant whoops and cheers from the winners telling their team they won were infectious, making things a lot of fun to watch. I was a little confused by the structure of the competition: the way it was edited, at least, it seemed like Spike's team was always in a position to respond to the other team's competitor and never had to designate their next player first, which, while Spike's team ultimately lost, seemed to give his team a distinct advantage.

Speaking of Spike, I'm not exactly shocked to see him leave already, though I am a little bummed as I picked him as a possible stealth chef who would surprise everyone and stick around longer than expected. Oh well. It definitely seems like he got booted off as a result of the structure of the challenge. While I'm sure his dish was the worst of the bottom four, this particular challenge was structured so that he was competing against a much narrower field of competitors than he would have been otherwise four episodes in (the chef's that didn't compete, for example, or the ones on the winning team that lost their rounds, might have had worse dishes than Spike's).

I'm also not quite sure what to make of Jamie at this point. Having presented a dish in an elimination challenge only twice now, I can't decide if she's just a shrewd competitor, letting the others fight it out while she keeps herself safe from elimination or someone who's heart's not really into the competition. I seem to remember that she started to phone it in towards the end of her season, but I could be misremembering that. Either way it is, as Richard said, an "odd story".

The quickfire challenge (in which the chefs had to create stuffing without using utensils) was one of those reality TV tropes that bugs me: the holiday themed challenge despite the fact we all know the episode was filmed months before the holiday season it's celebrating began. Still, the whole stuffing business was one of the least egregious of these challenges (much better than Top Chef's holiday episode, a pre-cursor to the All Star season, from several years ago, which was one long Christmas-themed episode that had clearly been filmed sometime in the summer).

Finally, gnocchi again Fabio? To paraphrase one of your many catchphrases, this is Top Chef, not Top Gnocchi. Still, I gotta admit, grating Parmesan cheese via the pot rack was hilariously brilliant. 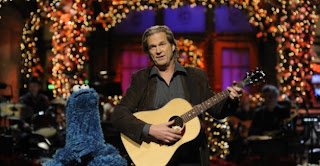 Not sure if Jeff Bridges is just too laid back or if the writers didn't give him enough to do, but this episode was pretty meh. Not bad, but not good either.

There wasn't a whole lot to the cold open (featuring the news headlines Democrats want to see in the new year) but I laughed pretty hard at most of them, especially the giddy look on Biden's face as the headline "Batman to Biden: Let's Switch Jobs" appeared. I love Sudeikis' ongoing portrayal of Biden as a goofy kid in over his head.

Usually "The Miley Cyrus Show" sketch is the highlight of the episode for me, but this was easily the weakest of the three so far. Bridges-as-Nolte failed to capture the Busey-esque insanity that is Nick Nolte these days.

Hands down, one of my favorite recurring bit recently has been Bill Hader as Julian Assange (seriously, put him in every episode), and I loved that he made fun of Mark Zuckerberg's selection as Time's Man of the Year.

I appreciated the shoutout to the Metrodome in the Crunkmas Concert ad.

There wasn't much to it, but the Kardashian's Christmas greeting was pretty funny, especially, "to all our boyfriends, Happy Kwanzaa".

The last sketch, about gift wrapping in the Old West, was odd, confusing and not at all funny.

Favorite Sketch: The infectious digital short, featuring Jessica Alba and Blake Lively as reluctant sexual partners and lines like, "the best 30 seconds of my life!" and "but I cried the whole time/doesn't matter had sex!"