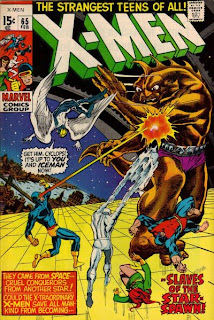 In a Nutshell
Professor X returns and helps the X-Men repel an alien attack.

Plot
The X-Men return to the mansion and find Havok and Lorna waiting to brief them. Havok tells the X-Men of the alien Z'Nox, a compassionless race of aliens who live to destroy and conquer other worlds. They have developed technology which enables them to move their planet through space, and the planet is heading towards Earth, following a scout ship that recently landed at the South Pole. When the X-Men question how Havok learned all of this, he reveals a very much alive Professor X. Jean bursts into tears, thankful that she longer has to pretend that Xavier is dead.

Professor X explains that he discovered the impending Z'Nox invasion at the same time he was visited by a dying Changeling hoping to make amends for his criminal past. Needing seclusion to prepare a defense, Xavier had asked Changeling to take his place, and imbued him with a portion of his telepathic power. Of the X-Men, only Marvel Girl was let in on the secret so she could help Changeling maintain the ruse. After Changeling died in battle with Grotesk, Xavier continued his work. He proceeds to lead the X-Men in vigorous training sessions before sending them off against the Z'Nox scout ship. As the X-Men battle their way through the ship, Xavier telepathically reaches out and unites all the compassionate minds of the world, bringing together millions of minds into one. Lorna then transmits this energy to the X-Men who amplify it and, through Cyclops, blast the Z'Nox planet with concentrated compassion. In agony, the Z'Nox retreat just as Professor X collapses from the strain.

Firsts and Other Notables
It's the big Professor X retcon. Turns out ol' Chuck never died. Instead, it was Changeling who died at the hands of Grotesk in issue #42 while Professor X was in seclusion preparing a defense against the Z'Nox. Why he needed to be so secluded (to the point of making the X-Men believe he was dead) is never really made clear. 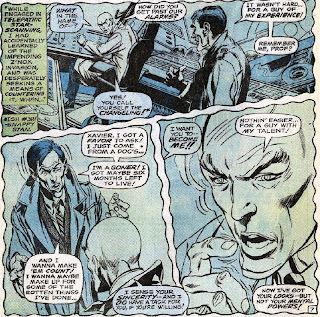 The Z'Nox appear for the first time. They're your generic world conquering aliens who thrive on conquest and fear compassion. Other than a retroactive follow-up to this story in John Byrne's "X-Men: The Hidden Years" series, they're rarely seen again. 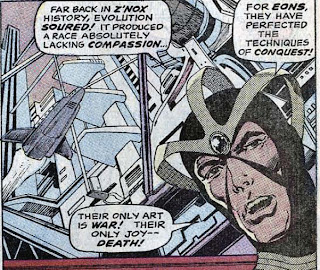 This is Neal Adams last issue on the title. Denny O'Neil, a DC writer known largely for his groundbreaking runs on Batman and Green Lantern/Green Arrow with Neal Adams, fills in for Roy Thomas.

International espionage agency SHIELD is referenced (and the SHIELD helicarrier appears) in an X-Men comic for the first time. The Fantastic Four also make a cameo appearance as Professor X is gathering humanity's compassion.

A Work in Progress
Changeling's absence from amongst the mutants captured by the Sentinels in issues #57-59 is explained here as his having died as Professor X in issue #42.

The X-Men travel to the Z'Nox scout ship via rocketship.

Despite the Z'Nox scout ship (and the X-Men) being at the South Magentic Pole, Xavier tells Lorna to direct his mental energy to Death Valley for some reason.

Scott expresses some jealousy over Alex's leadership abilities, though it is Alex's jealousy of Scott that will come to define their relationship in years to come.

Remember Professor X's giant beam of love that was blasted into space; it will later be used to setup a plot after Chris Claremont takes over the book.

Ah, the Silver Age
Because it's a Marvel comic in the 60s, the X-Men can't just nicely come inside the mansion and hear what Havok and Lorna have to say, and a brief scuffle ensues. 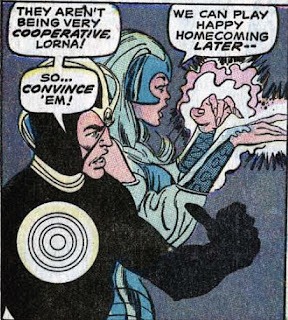 Once again, the cobalt bomb is referenced as the be-all and end-all when it comes to destructive force.

After explaining how the Z'Nox planet coming into Earth's orbit would seriously mess things up, Havok tells the X-Men that the planet has just passed through Saturn's orbit on its way to Earth...which would mean Saturn should be pretty messed up too. 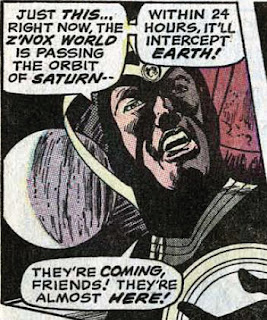 So Professor X gathers humanity's compassion into a single mind, then Lorna transmits that energy to Marvel Girl, who sends it to Havok, who boosts it and blasts his brother with it, so Cyclops can blast the energy into space at the Z'Nox homeworld while Iceman keeps him from overheating. That's physics as only comic books can do it. 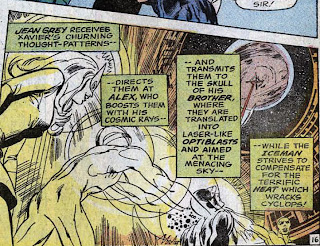 "Professor Xavier is a Jerk!"
This is largely the issue which inspired this category, both for allowing the X-Men to believe he died for no good reason, and for letting Marvel Girl in on the secret then telling her she must lie to the other X-Men (including faking her grief over his "death") as well.

Young Love
Iceman grows concerned over the growing attraction between Alex and Lorna. 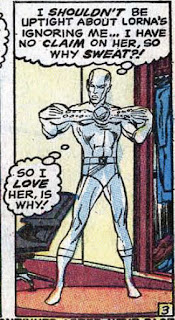 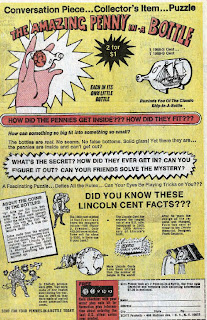 Neal Adams on bring back Professor X
"I said, 'Roy, I think I have a story that will do it. I'm going to set it up when we free all the captured mutants getting out of their tubes and standing around. If you want to name them, you can name them. But the one character that's not going to be there is the Changeling. I'm not going to do it right away, but eventually we'll reveal that the Changeling was really the one who died instead of Professor X.' I'd figured out that Professor X had discovered this incredible plot to destroy the Earth, as a result of which he had to go into hiding for a year in order to try and stop it. Trouble is, he doesn't know how he can hide himself for a whole year. Coincidentally, the Changeling breaks in on him, and says, 'I've got cancer-I'm going to die. I've examined my life and it's been a terrible waste. I can't make up for all the crap I've done, but I'm coming to you to find out if there's anything I can do.' Professor X says, 'There is something you can do You can make yourself look like me...' Then Professor X brings Marvel Girl into it. He says, 'Look, the Changeling is going to die, but it's going to appear to be me that dies. Since he doesn't have my mental abilities, you are going to have to help him. If we want to save Earth, nobody can know I'm gone.'

Teebore's Take
This issue is mainly remembered for two reasons: the departure of Neal Adams and the Professor X retcon. Honestly, as retcons go, this one is pretty good. Other than the sheer coincidence of Changeling appearing at the same time that Professor X needed to go into hiding (and the aforementioned lack of any explanation for his secrecy) it fits within the established story well. While Thomas doesn't seem to have intended to bring Professor X back when he wrote him out in issue #42, Adams clearly gave it some thought when he came aboard and helped lay a bit of groundwork that makes the reveal seem more natural.

Retcon aside, the rest of the issue isn't half bad either. It's a bit dated, what with the X-Men essentially defeating the Z'Nox with love (and the whole "Professor X to Lorna to Marvel Girl to Havok to Cyclops while Iceman cools him down" routine is a bit dicey) but there's something charmingly Silver Age about the whole thing: the one dimensional villains, the team working together to achieve victory, a resolution that speaks (albeit hamfistedly) to the best in humanity. It would be a fitting end for the book's Silver Age run, and send it out on a relative high note, but unfortunately we've got one more to go...
Newer Post Older Post Home
Posted by Austin Gorton at 8:00 AM