Countdown to Christmas #14: Santa Claus is Comin' to Town! 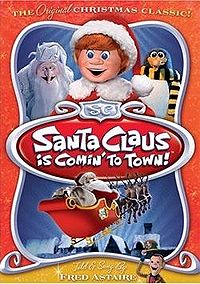 "Santa Claus is Coming to Town!" is one of Rankin & Bass' Christmas stop motion specials (and is less well known than their Rudolph special, which will be covered in this series in due time). It first aired in 1970 and is essentially the origin of Santa Claus, but even better, it's the origin of Santa Claus as though a modern comic book writer wrote it for the most pedantic of comic book geeks, in which even the most minor of details are given a specific background story to explain it. This thing is like the "Superman: Birthright" or "Green Lantern: Secret Origin" of Christmas specials.

Being something of a pedantic comic book geek, I rather like it. Amongst the things we learn about Santa are:

The Origin of the name 'Kris Kringle': Orphaned baby Claus is taken in by the Kringle family of toy making elves and given the name Kris.

The Origin of the Red Suit: It is the traditional garb of the Kringles.

The Origin of "Ho, Ho, Ho": Apparently, this is how seals laugh, and they taught it to a young Kris.

The Origin of Santa Claus' Omniscience: Kris is taught magic by the Winter Warlock, which allows him to transform a ball of snow into a Crystal Snowball through which he can monitor the behavior of children.

The Origin of Going Down the Chimney and Leaving Presents in Stockings: The evil Burgermeister Meisterburger, ruler of Sombertown, outlaws toys and orders all the towns' doors locked so that Kris can't make his deliveries and declares that each house will be searched for toys, forcing Kris to deliver them via the chimney and hide them in the drying stockings on the mantle.

The Origin of the Flying Reindeer: The Winter Warlock gives Mrs. Claus the last of his magic seed corn, which when eaten by reindeer, enables them to fly.

The Origin of the Beard: Once outlawed by Meisterburger, Kris grows the beard as a disguise and begins using his birth name, as the name Kringle is now dangerous.

The Origin of Christmas Eve: Once Meisterburger falls out of power and his anti-toy laws are revoked, the legend of Santa Claus continues to grow worldwide until Santa can no longer keep up with the toy requests, and cuts his toy delivering visits down to once a year. He selects Christmas Eve, which is his wedding anniversary (and is kind of a jerky thing to do to Mrs. Claus...).
Newer Post Older Post Home
Posted by Austin Gorton at 6:00 AM