The most recent of my favorite Christmas movies, Elf combines my love of Christmas with my love of Will Ferrel comedy into a fun little movie I watch in whole or in part every holiday season. Though the climax bugs me (specifically the shoehorning in of some pretty random action movie beats) there's plenty of good stuff to balance that out in this story of a man raised to be an elf trying to reconnect with long lost father. 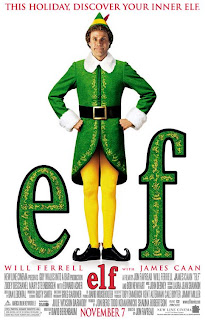 Some of my favorite lines:

Emily: We can't just throw him out in the snow.
Walter: Why not? He loves the snow. He's told me 15 times.

Gimbel's Santa: Now what can I get you for Christmas?
Buddy: Don't tell him what you want, he's a liar.
Gimbel's Santa: Let the kid talk.
Buddy: You disgust me! How can you live with yourself?
Gimbel's Santa: Just cool it, Zippy.
Buddy: You sit on a throne of lies.
Newer Post Older Post Home
Posted by Austin Gorton at 6:00 AM