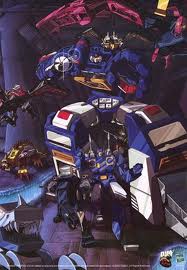 Everyone has that one Christmas gift they always wanted but never received, and Soundwave is mine. As a kid, I loved Soundwave. Partially because I had an odd fascination with loyal sidekick characters (such characters were often too uncool to be the leaders themselves, like me). But really, it was because he transformed into a tape deck, and you could then put another Transformer that turned into a tape inside him. And for six year old Teebore, that was pretty frickin' awesome. 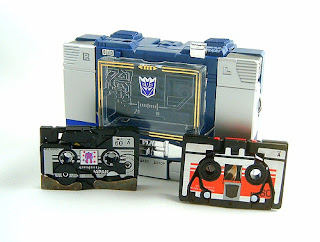 I asked Santa for the Soundwave toy three years straight (which is a long time for a kid) and never received him. Looking back, I realize this is because by the time I was asking for Soundwave he'd been off toy shelves for several years, replaced by newer Transformers, and that those bastards at Hasbro weren't sharing the plans for making more Soundwaves with Santa. Plus, there was no eBay back them, so it wasn't like Santa could just order one for me online. 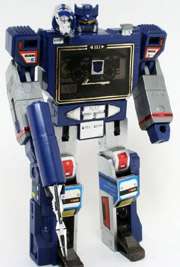 In place of Soundwave I received plenty of kick ass toys through the years, so it wasn't like I was really suffering or anything. Soundwave-less Christmases were still great Christmases. Eventually, I even bought Soundwave for myself, at Botcon, the annual Transformers convention; now he sits atop my stereo, two relics of an ancient time. But I'll always remember him as that one special toy that taught me there were limits even to Santa's power.
Newer Post Older Post Home
Posted by Austin Gorton at 6:00 AM