The Dark Side of Narnia 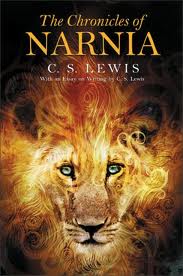 The Chronicles of Narnia: The Voyage of the Dawn Treader has come to a theater near you! I have recently finished reading The Chronicles of Narnia in its entirety and I'm glad that The Voyage of the Dawn Treader is the Narnia installment that is coming out because it coincides with this post well since it marks when my opinion of the series started to change.

I knew going into reading The Chronicles of Narnia that the books would have a heavy dose of Christian symbolism. But that didn't really bother me. I might not buy everything C.S. Lewis is trying to sell, but I understand the fact that his stories are based off of his beliefs. However, I started getting some weird vibes in the last three (in-universe chronologically) books.

So, without further ado, here are five things I think are messed up about The Chronicles of Narnia *spoiler alert!*:

1. Dissin' Vegetarians: Alright, I'll admit it, I'm biased. However, at the start of The Voyage of the Dawn Treader we learn about cousin Eustace. He's a selfish, know-it-all brat. Not content to leave it at that, C.S. Lewis must tell us why he's a brat. The answer is obvious, though. Eustace is a brat because his parents are Godless hippies.


He didn't call his Father and Mother "Father" and "Mother", but Harold and Alberta. They were very up-to-date and advanced people. They were vegetarians...
Now, I know where C.S. Lewis is coming from. I'm a pretty big lefty, but even I recognize that around C.S. Lewis' time is when people starting going a bit overboard with letting kids do whatever they wanted under the guise of letting their natural creativity flow. (We learn more about Lewis' disdain of alternative learning centers in The Silver Chair and talk of the Experiment House.) But let's face it, kids need structure. They don't necessarily need a belt buckle to the ass, but authority figures are a must.

However, why the needless dig at vegetarians? Are any ideas that don't conform to the norm automatically bad? What's odder is this line comes later on in the same page:


Eustace Clarence liked animals, especially beetles, if they were dead and pinned on a card."
So apparently having vegetarian parents creates kids who want to torture bugs? Huh? And really, when you're writing a saga where 50% of your characters are talking ANIMALS perhaps hating on people for not eating them isn't the wisest idea.

As an aside, while looking those quotes up I saw this was also written about Eustace:


"He liked books if they were books of information and had pictures of grain elevators or of fat foreign children doing exercises in model schools."
Ummmmm.....OK?

2. It's A Little Sexist: I know this was written in a different time. I'm also not talking about the fact that, generally, it's the men who do the fighting and the women stay behind. Heck, I'm not that bothered when Santa Clause gives Peter a sword but Lucy and Susan get gifts designed to keep them away from battle.

Lucy gets a dagger (presumably for self defense) and a magic healing potion that is sorely underutilized. Susan gets a horn (in case she gets into trouble and needs the men folk to come bail her out) and a bow with arrows. Sure the bow is offensive, but it also keeps her far away from the action. (Although, I suspect the bow is less to keep Susan away from battle and more to keep her away from the men of battle. You know, her being a hoe and all. But more on that later.)

Anyway, the real part that bothered me was a line near the end of The Silver Chair. Basically, Eustace Scrubb and Jill Pole come back from Narnia to raise some serious shit in the Experiment House (an alternative learning center that doesn't teach about Jesus thus meaning the kids there apparently have no way of knowing anything about Christianity). Anyway, while terrorizing the Experiment House and its bullies Falkor style, this happens:

It's like, look how crazy this Experiment House is! It has a woman in charge of it!?! No wonder the kids are screwed up and Godless! You can't trust women to run a school!

3. It's A Wee Bit Racist: The main antagonists of Narnia are the Calormenes. Narnians are light haired and fair skinned. The Calormenes? You guessed it, dark hair and brown skin. Or...er..."Darkies" as the Dwarves call them:


"Had enough Darkies?" They yelled. "Don't you like it? Why doesn't your great Tarkaan go and fight himself instead of sending you to be killed? Poor Darkies!"
They also carry scimitars and believe in different Gods than what Narnia believes in. Yeah, they're pretty much Arabs. So naturally they're portrayed as greedy, vicious warmongers. Now, some Calormenes end up doing good things, but it almost feels like a token gesture.

However, my real issue is that, in a made up fantasy land, why did C.S. Lewis need to bring race into it at all? Couldn’t the lands be made up of people of all skin color? If you make each land a different race (and especially if you make one of those races evil) then you're just asking for trouble.

Oh, and if he kept race out of his story we also wouldn't end up having the main characters dress up in black face:


"And Look on this stone bottle. In this there is a juice which, when we have rubbed it on our hands and faces, will make us brown as Calormenes."
4. The Ostracizing of Susan: Remember Susan from The Lion, The Witch and The Wardrobe and Prince Caspian? She was Queen and fought for the good of Narnia and Aslan? Well, at the end of The Last Battle everyone is let back into Narnia....except her. I'm not sure what she did (although I'm assuming a lot of whatever she did happened sans clothes) but I do know she's not welcome and nobody likes her:


"Where is Susan?"
"My sister Susan," answered Peter shortly and gravely, "is no longer a friend of Narnia."
"Yes," said Eustace, "and whenever you've tried to get her to come talk about Narnia or do anything about Narnia, she says 'What wonderful memories you have! Fancy your still thinking about all those funny games we used to play when we were children.'"
"Oh, Susan!" said Jill. "She's interested in nothing nowadays except nylons and lipstick and invitations. [THAT SLUT!] She always was a jolly sight too keen on being grown-up."
"Grown-up, indeed," said the Lady Polly. "I wish she would grow up. She wasted all her school time wanting to be the age she is now, and she'll waste the rest of her life trying to stay that age. Her whole idea is to race on to the silliest time of one's life as quick as she can and then stop there as long as she can."
I just don't get this from a literary stand point. Why did C.S. Lewis need to ostracize Susan? What moral was he presenting? The biggest problem is, after Prince Caspian, the only thing we hear about Susan before they talk smack is that Lucy thinks Susan is prettier and that Susan visited America. So, we have no idea what led her down this dark path. It's like if Urkel disappeared from Family Matters for two years and then came back as a cyborg ninja...but, aside from some vague allusions, we never find out how or why.

The only lessons I can find is that it's wrong to accept invitations and everyone should have a Peter Pan complex. I don't know, the whole thing just feels incomplete and unnecessary.

My theory is this. Most people know that the character of Lucy was based on a real life girl. I believe Susan was too! However, by the time C.S. Lewis wrote The Last Battle Susan's real-life counterpart had become a lesbian nudist vegetarian atheist.

Or, as I call it, a vegenudesbeist.

In Narnia Eustace and Jill must help out the King of Narnia. By "help out" I mean totally get their collective asses kicked by the Calormenes. The beat down is so extreme, in fact, that Aslan comes out and says "nuts to this" and destroys the entire fucking world!

After that, Eustace and Jill find themselves in a place like Narnia, but better, and everyone but the street walker is there. You probably guessed by now that it turns out they all died in a gruesome locomotive disaster. But it's OK, because they're all in Heaven! Yay!

Now, I don't want to start an intense theological debate, but I find the use of Heaven a cheap narrative device. I'm not arguing its existence, it is just that if you introduce it into your story you effectively kill all suspense and urgency.

In other words, it's hard not to feel a morbid weirdness when everyone is pumped over the fact that they all died in a train wreck:


Their hearts leapt, and a wild hope rose within them.
"There was a real railway accident," said Aslan softly. "Your father and mother and all of you are - as you used to call it in the Shadowlands - dead. The term is over: the holidays have begun."
So, the apparent happy ending to this children’s series is that everyone dies in a train wreck (including their parents who, by some stroke of good fortune, happened to be on the same doomed train) and Susan is left to be a now sibling-less orphan whose entire family was tragically ripped away from her in a horrific railway accident.

But I suppose that serves the whore right.
Newer Post Older Post Home
Posted by Dr. Bitz at 10:00 AM