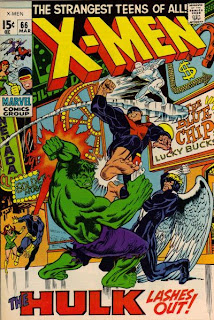 "The Mutants and the Monster"
March 1970

In a Nutshell
The X-Men fight the Hulk.

Plot
The X-Men gather around a comatose Professor X. After Iceman and Havok quarrel over Lorna's affections, Beast guesses Xavier might know how to cure himself, and uses the Professor's mind probe device to read Xavier's surface thoughts. All he gets is an image of Professor X urging the X-Men to find the Hulk. Then Marvel Girl telepathically probes Xavier's mind and similarly sees nothing but the Hulk. Deducing that Xavier is actually telling them to seek out the help of scientist Bruce Banner, the Hulk's alter ego, the X-Men depart, leaving Havok, Lorna and Iceman behind to guard Professor X. 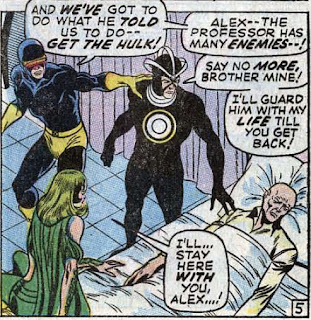 Tracking the Hulk to Las Vegas via news reports, the X-Men are attacked by the Hulk but Marvel Girl is able to telepathically put him to sleep, at which point he reverts to Bruce Banner and awakens. Just as the army arrives to take Banner into custody, he tells the X-Men of a gamma ray device he designed with Xavier to cure mental exhaustion, which is located in one of his secret labs. Stressed out by the prospect of Xavier dying because the army won't let him help the X-Men, Banner turns back into Hulk and escapes into the desert. The X-Men follow him, and the ensuing battle reveals a hidden lab, inside which the X-Men discover the device they need. Returning home, they are able to successfully revive Professor X.

Firsts and Other Notables
This is the last original issue of X-Men until August of 1975. As of this issue, the title was canceled, and nine months later it was revived with issue #67 in order to reprint previous issues of the book. Reprints ran bimonthly from #67 to #93 (as well as two "king sized" annuals) and then, following the debut of the all new, all different X-Men in Giant Size X-Men #1, the book began printing original stories again with issue #94. 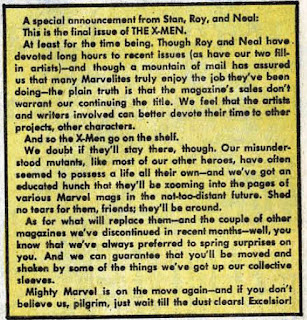 In the roughly five years between the publication of this issue and Giant Size X-Men #1, the X-Men made several appearances throughout the Marvel Universe. More on that shortly.

Roy Thomas returns to send off the book, but with Neal Adams gone for good, Marvel veteran Sal Buscema fills in on art.

Hulk appears in X-Men for the first time. He is being pursued by a contingent of the US Army led by Major Glen Talbot, a recurring antagonist in Hulk's comic.

A Work in Progress
The mind probe device the X-Men use to initially read Xavier's mind is a variation of a device built by Hank Pym, as seen in Avengers #68, apparently. 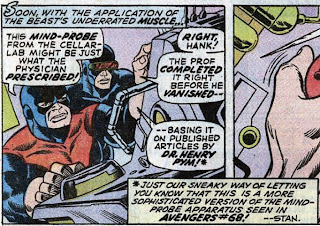 Professor X continues to have secret histories with established characters; here we learn he corresponded with Bruce Banner on the design of a gamma ray device to help cure mental exhaustion.

Ah, the Silver Age
Though the title is canceled due to low sales, the Statement of Ownership in the book lists the last issue as selling 199,571 copies, a number much, much larger than even the best selling comic these days.

Whilst climbing a cliff, Beast compares himself to Justice Douglas. No idea what that's referencing. 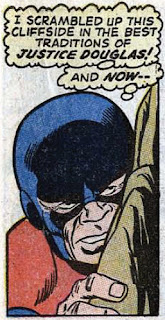 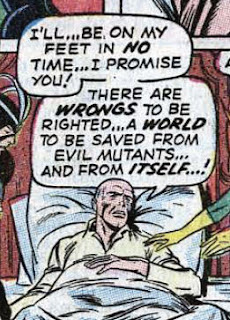 Young Love
Iceman and Havok comes to blows over how close Havok and Lorna are becoming.

Later, when Havok is asked to stay behind and guard Xavier, and Lorna decides to stay with him, Iceman also refuses to leave, determined to keep an eye on them. 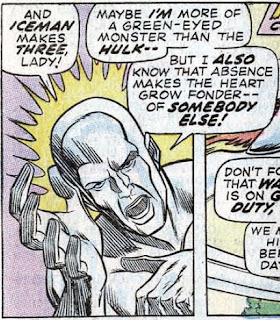 Human/Mutant Relations
The army doesn't think too highly of mutants. 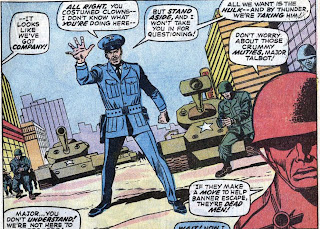 Roy Thomas on X-Men returning as a reprint title
"Those later issues sold better than Goodman [Marvel's publisher] though they would, so maybe he decided that people actually liked the X-Men. But, instead of bringing X-Men back with new stories, he just opted to do it as a reprint book, which didn't help much of anything. It kept the characters around, but that's about it."

Teebore's Take
The X-Men fight the Hulk. The end. Say what you will about the last issue, and I'll freely grant that between the moving planets and love beams it was beyond ridiculous, but at least it was decidedly over the top and Silver Age-y, and was trying to say something. This issue vacillates between being obviously padded (the X-Men probe Xavier's mind both via a device and Marvel Girl's telepathy; in the course of two pages Banner both doesn't remember Xavier then suddenly does) and utterly pointless (aside from resolving the minor cliffhanger involving Professor X, it's a fill-in story in every way; despite there being some thematic material to mine in the fact that both the Hulk and the X-Men are considered outcasts, the characters just fight then go their separate ways). X-Men then, at least in its original incarnation, goes out not with a thematic or exciting (or even charmingly goofy) bang, but with a dull, pointless whimper.

At which point it seemed the book was destined for a status as a historical footnote, a rare misstep from a time when Marvel was cranking out hit after hit. But thanks in large part to the short but impactful Thomas/Adams run near the end affording the book a certain level of cult status as well as Marvel keeping the title in print, albeit as reprints, this wouldn't be the last the world would see of the X-Men.


As for "X-aminations", we're certainly not stopping now that we're on the cusp of the really good stuff. Next week's post will most likely be a look back at the highs and lows of the X-Men's run up to this point, one final post spent with the Silver Age team.

I mentioned above that while their title was reprinting old stories the X-Men made various appearances throughout the Marvel Universe. After next week's retrospective, we'll spend two weeks checking out some of those appearances. I've divided them into two chunks, as follows:

I'll probably write a sentence or two describing the plot of each issue, and then do my best to break down the events of each group of stories along similar lines to the previous "X-amination" posts, with particular focus given to significant character changes and events which setup future X-Men plots.

And then, Giant Size X-Men #1 and the debut of the all new, all different X-Men.
Newer Post Older Post Home
Posted by Austin Gorton at 8:00 AM