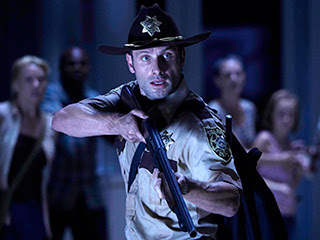 Not a bad episode, but not quite what I was expecting. I'm curious at what part of the production process it was determined that episode six was the first season finale. When Rick and company arrived at the CDC at the end of the last episode, it seemed to be setting up the kind of status quo ending in which season finales traffic. I didn't expect them to spend the rest of the show hanging out there, but I thought maybe the next season would open with them there before something forced everyone to leave. Instead, it looks like the CDC was just one more step in the journey, and the status quo that ended was more thematic (now that they've realized the full extent of the zombiepoc, perhaps they'll look for salvation somewhere other than a pre-apocalypse institution of authority that maybe survived intact).

As mentioned, I'm a sucker for details regarding the breakdown of society in the wake of an apocalypse, but I rather liked that Jenner admitted they had no idea where the zombie plague came from or started. It adds to the crushing inevitability of the whole thing.

Nice to see the grenade Rick snagged in episode two reappear, though I'm pretty sure that explosion should have done more damage to him (and, for that matter, everyone else was awfully close to the CDC when it exploded, but that's TV).

So, what does everyone think Jenner whispered to Rick? I'm guessing he either suggested a potential shot-in-the-dark safe haven or told him that someone in his group was infected (but not showing symptoms). I feel like that business with the blood tests was more significant than it appeared (but maybe that's just because the trailer for the episode was leading us to believe Andrea had been infected).


How I Met Your Mother: False Positive 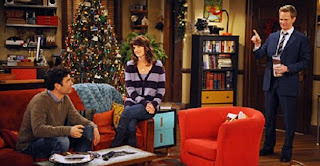 After last week's misstep, in which a favorite HIMYM device (the unreliable narrator) was used to poor effect, this episode, which also trotted out a favorite device (out-of-sequence storytelling that alters the audience's perception of events) was a reminder of how good this show can be.

More importantly, it was a good Ted episode. Ted can be a problematic character. He's the main character, and thus, can't be as zany a character as his co-stars. He's like Leonard from The Big Bang Theory. Worse, Ted is a fairly earnest main character. While Barney, Robin, Marshall and Lily all have their eccentricities, Ted has to remain the voice of reason. One of the ways the show tries to get around this is by mining the fact that Ted can be a snobby douche for laughs, and while some of that is funny, too much of it leaves the audience not liking the show's main character because he comes off as a douche.

This episode played Ted's earnestness and the fact that he is the voice of reason for laughs, and it worked, both in terms of humor (such as when everyone is having an existential freakout triggered by the news of Lily's pregnancy and Ted simply thinks, "I should make a Christmas-themed snack for the movie tomorrow night") and of Ted's character (we're laughing with him instead of at him, as is the case with most of the "Ted is a douche" material).

So it was a good Ted episode, but it was a good episode for everyone else too. I loved Million Dollar Heads or Tails and Alex Trebek's infatuation with Robin ("Aside from that coin, this is the other thing that’s flipping right now.  What is my lid ... for you!"), Barney's Favorite Things and Marshall and Lily attempting to do nine months of baby prep in one night.

Alex: OK, your practice toss came up tails, and our Vegas oddsmaker tells us that the next toss is still just 50-50...

Ted: You will lie together as man and wife until Lily is great with child!


Top Chef All Stars: New York's Finest
Aw, not Puffy Dale and Hilariously Snooty Stephen! I'll miss you guys (and Scott Tobias, who reviewed this episode for the Onion AV Club, shares my affection for Stephen, saying he's "like a Wes Anderson character in the real world, with a gulf between ambition and achievement that resembles Max Fischer’s in Rushmore." I like that).

And as much as I'll miss them, the relatively early departure of both wasn't terribly surprisingly, although the way Judges' Table was edited, it sure seemed like Fabio Smirnov was going home (we didn't see the judges say anything good about his dish, whereas Stephen's was problematic but not outright terrible, but apparently it tasted like soap). It's always dangerous to try and suss out a loser from the limited Judges' Table comments (since the few moments we see of the hours long discussion is so beholden to the whims of the editors) but it really seemed like Fabio or Tiffany could easily have gone home as well.

The mis en place relay is always fun, and I liked the twist this time around (the producers seem reinvigorated by this season as well, and have been coming up with some good challenges and twists) even though, ultimately, it didn't amount to much (the team with the most time still cooked the least-liked dish).

Is it just me, or has Spike replaced his goofy hats with enormous hair? It's bigger than Marcel's ever was at this point.

Finally, Colicchio has been doing this for awhile (since at least last season) but the bit where, after the losing chefs come back to hear the verdict and Tom sums up their failures before Padma knifes them, has become awfully cutesy. For example, this week we got, "You may have great knowledge of Italian food. I have great knowledge of Led Zeppelin. Doesn’t make me Jimmy Page." Seriously, Tom, leave the "witty" bon mots for Bourdain. Another episode that felt like it was written around a premise ("let's get Sheldon and the gang dressed up as the Justice League!") with everything else just a pretext to get to that point. Yeah, there was some business involving Leonard and Penny and Penny still having feelings for Leonard, but even that stuff just felt like lip service was being paid to the idea. Basically, this episode was about the group trying to win a New Years Eve costume party. And they did. I mean, yeah, that's a story, but it's not all that exciting, complicated or even funny.

Zack: I saw this great thing on the Discovery Channel -- turns out that if you kill a starfish, it will just come back to life.
Sheldon: Was the starfish wearing boxer shorts? Because you might have been watching Nickelodeon.

Zack: Penny, there's no 'I' in Justice League. 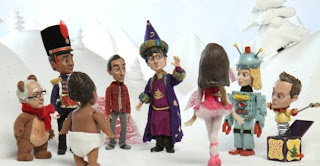 Once again, Community leaves me loving it but lacking the words to effectively express why, and then I read Todd VanDerWerff's review on the Onion AV Club, which is not only a great analysis of the episode but serves as a treatise on Christmas TV episodes in general. So I'll just link to it and leave it at that.
Newer Post Older Post Home
Posted by Austin Gorton at 8:00 AM