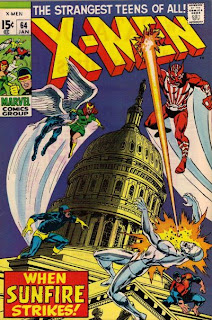 In a Nutshell
The X-Men battle Sunfire

Plot
In New York, the X-Men's mini Cerebro unit alerts them to the presence of a new, powerful mutant. At the United Nations, Japanese statesman Saburo Yoshida is unveiling a new peace monument when the gathering is attacked by the mutant Sunfire. The X-Men arrive and battle Sunfire, but he flees when the police arrive. Sunfire, the son of Saburo, meets with his uncle and expresses doubts about their mission to attack America. His uncle reminds him of Hiroshima and the vows he swore. 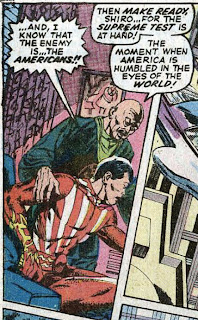 Later, Cerebro leads the X-Men, searching for Sunfire, to a diplomatic car headed towards the airport. Suspecting Sunfire is part of Saburo's party, they follow the group to Washington DC. On his way to deliver a speech, Saburo sees his son changing into his Sunfire costume, but Sunfire ignores his father's protests. He proceeds to attack the Capitol building, planning to level it, and the X-Men intervene. Saburo goes to the roof of the building, challenging Sunfire to kill his own father and telling him his uncle is sick. Sunfire's uncle, seeing that Sunfire is torn, shoots Saburo, who falls from the Capitol. As Sunfire dives for his father, he blasts his uncle, killing him. As Saburo dies, he begs his son to live for peace.

Firsts and Other Notables
Sunfire (aka Shiro Yoshida) makes his first appearance. As the name suggest, he has heat/fire based powers. Though the villain of this issue, he will eventually join the X-Men in Giant Size X-Men #1 but leave shortly thereafter, and rejoin briefly in the early 00s as part of an ad hoc group assembled by Jean Grey. Sunfire is the fourth and last significant X-Men character introduced in the period between the Lee/Kirby run and the Claremont years (the other three being Banshee, Lorna Dane and Havok). He remains a recurring and somewhat adversarial ally of the X-Men, who basically shows up any time the team gets anywhere near Japan.

Don Heck fills in for Neal Adams and turns out a fairly serviceable impression of Adams (with a little John Buscema thrown in).

A Work in Progress
Due to Marvel's sliding timeline, most of the details surrounding Sunfire's origin as the child of a Hiroshima survivor determined to avenge Japan's defeat in World War II are tacitly ignored these days.

On their way home from the Savage Land, the X-Men stop at their midtown Manhattan apartment base (presumably Cyclops' apartment from when the X-Men were disbanded, but that's just a guess) before returning to the mansion upstate.

The X-Men are still using the confiscated Sentinel airship to get around.

Ah, the Silver Age
Something tells me the bombing of Hiroshima wasn't quite as tidy as this.

Sunfire's big "stick it to the Americans" scheme of burning down the capital is a little out of balance. Destroying the Capitol building < dropping two atomic bombs on Japan. 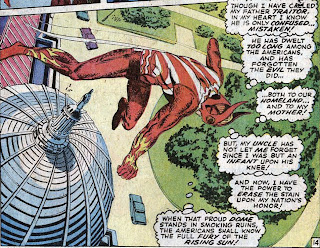 For some inexplicable reason, Cyclops takes on Sunfire alone, telling Marvel Girl to stay back, despite the fact that she more or less took down Magneto last issue. 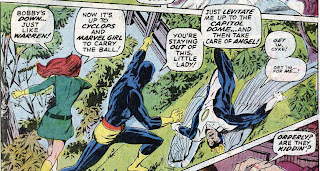 As Sunfire attends to his dying father, the police politely agree to give the guy who was just trying to destroy the Capitol, endangering thousands of lives in the process, some space. 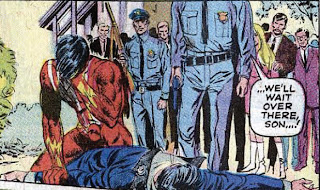 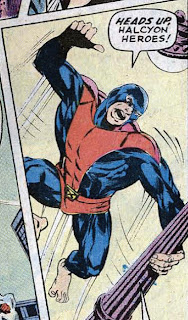 Build up your Vocabulary with Beast Sunfire
Perfidy (pur-fi-dee), noun. 1. deliberate breach of faith or trust; faithlessness; treachery: perfidy that goes unpunished. 2. an act or instance of faithlessness or treachery. 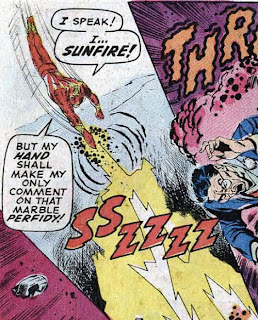 Human/Mutant Relations
Iceman saves some civilians from Sunfire's attack at the UN, confusing some bystanders. 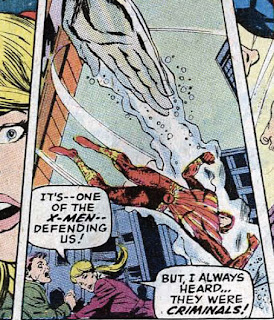 It's in the Mail
It takes all kinds: someone actually writes in to complain about Neal Adams' art. 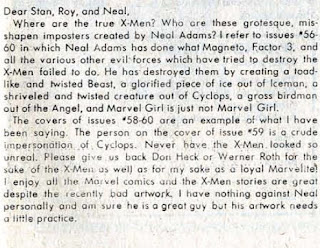 Teebore's Take
When originally written, the idea of a Japanese villain motivated by the outcome of World War II was novel and worth exploring, though now it stands out more as a curiosity of its time. Still, this isn't a bad little done-in-one. Sunfire's struggle between his raving xenophobic uncle and his moderate, modern father isn't exactly subtle, but it does give the character more depth than most villains of the day got. I haven't ever read anything suggesting that Roy Thomas (or anyone else at Marvel) had any plans for Sunfire beyond this one-off issue (he next appears in an issue of Sub-Mariner), which makes it simply a happy coincidence that Thomas portrayed him as sympathetic enough that when Len Wein went scouring for international mutants to star in Giant Size X-Men #1, Sunfire was usable.
Newer Post Older Post Home
Posted by Austin Gorton at 8:00 AM