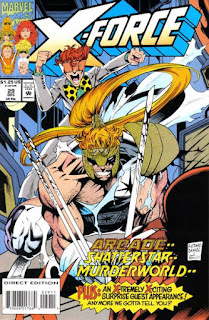 In a Nutshell
Shatterstar is abducted by Arcade.

Plot
Spending a day away from X-Force in an attempt to assimilate into the local culture, Shatterstar is captured by Arcade. Meanwhile, Cannonball & Boomer depart to visit Cannonball's family. Cable checks in on Tempo, then with Siryn & Warpath, before contacting Domino and asking for her help. Elsewhere, Shatterstar wakes up inside Murderworld, and is compelled to fight against a group of warriors from his world by Arcade, who has taken a family hostage. Shatterstar manages to defeat the warriors and set the family free, but then Arcade introduces another player looking to take down Shatterstar: X-Treme.

Firsts and Other Notables
Arcade, whose last X-book appearance was back in Excalibur #4-5, is the villain of this story. He's abandoned his traditional Murderworld base for a traveling variety, though it's unclear exactly how that works because we only see it from the inside. This will become slightly important about ten issues from now, as X-Force will briefly move into the abandoned Murderworld. 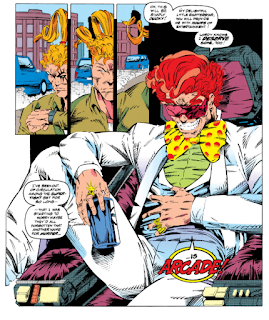 He is, however, still using trashcans to abduct his victims. 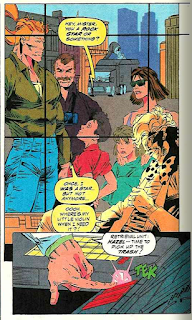 Cannonball & Boomer depart to visit Cannonball's family in Kentucky, moving them into position for the "Child's Play" crossover with New Warriors that will put the Upstarts storyline to rest (the pair are attacked in Kentucky at the start of that story), which begins in issue #32. 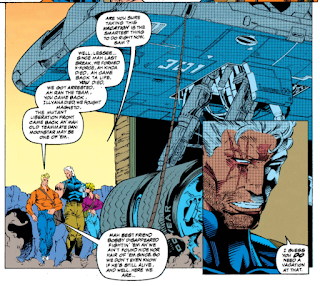 In what might be the fastest turnaround for any of the new characters introduced in the '93 annuals, Adam-X (the X-treme, in case you forgot) pops up at the end of this issue, with Arcade pitting him against Shatterstar, just a few issues after his debut. 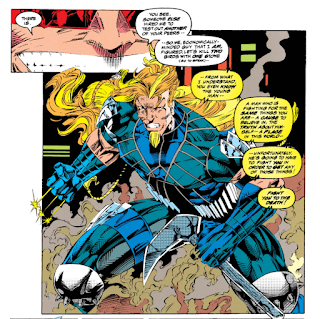 Chronology Corner
Cable & Domino appear in this issue and the next prior to Cable #6-8.

A Work in Progress
It's made clear that three weeks have passed since the end of last issue, with X-Force spending most of it searching for Sunspot.

Temp remains on hand at Camp Verde, though she pointedly hasn't joined the team.

Siryn is drunkenly watching "vid scans" of the fight with the new MLF, blaming herself for Sunspot's disappearance, and, stupid name aside, it makes some sense that X-Force would have documentation of their missions...except, who was filming the battle? 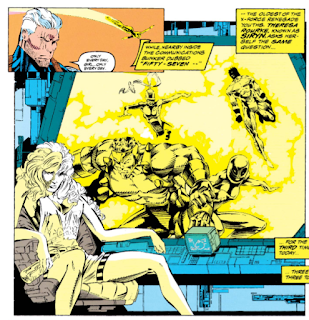 The Grim 'n' Gritty 90s
Cable is apparently not a fan of Beavis & Butthead. 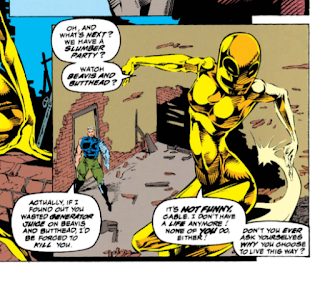 The mother of the family four Arcade captures to impel Shatterstar's participation is depicted, of course, in the most sexualized 90s way possible. 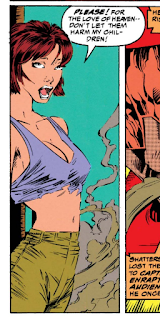 Artistic Achievements
I don't even know what is going on with the anatomy in this panel. 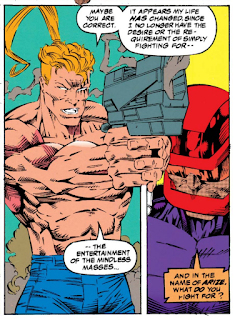 The dialogue at one point has Shatterstar referencing a hologram of Major Domo shown to him by Arcade, yet the art doesn't depict it. 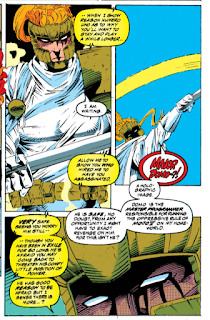 Young Love
Siryn & Warpath continue to be a thing, with Warpath actively taking care of a drunken Siryn. 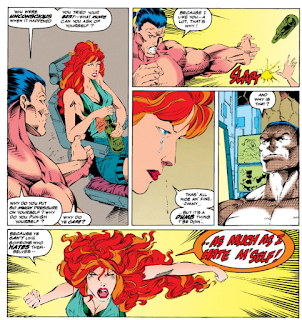 Austin's Analysis
I'm on the record as not being the world's biggest Arcade fan, but I like his use in this story, for two reasons. One, as Nicieza continues to reference the characters' histories and connect the series more tightly to the larger X-universe, it's good to see the team facing off against a classic X-baddie. Two, pitting Shatterstar specifically against Arcade makes a lot of sense. Aside from giving Shatterstar something of a spotlight story (which he's never really had outside his introduction and, to lesser extent, the series' first annual), Arcade's whole schtick is that he likes to murder people in the most entertaining way possible, while Shatterstar comes from a world dominated by entertainment, where he fought people to the death for the appreciation of the watching masses. Of course, the art - which is especially rough here, even by 90s fill-in standards - takes a lot away from this issue, but the premise is not a bad one.