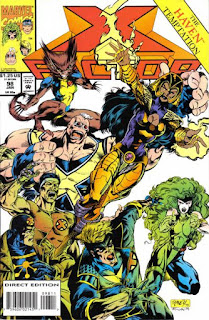 In a Nutshell
X-Factor learns more about Haven.

Plot
Despite Havok & Forge's orders to arrest Haven, X-Factor is torn over whether to do so, with Polaris in particular vehemently defending her, until Haven simply teleports away. The team continues their debate back at their headquarters, where Havok & Forge share their government intel that Haven is responsible for a number of recent cataclysms, triggered in an attempt to jump-start her prophesied "New Humanity", including the recent Kennedy Center bombing X-Factor responded to. Polaris remains dubious however, citing that the intelligence came from the same government that recently tried to kill her. Later, Madrox tries to reabsorb all his errant duplicates, but is unable to reabsorb two of them. Meanwhile, Random approaches Strong Guy & Wolfsbane looking for X-Factor's help, telling them he was targeted by the same soldiers who attacked Polaris. And at her retreat in the California mountains, Haven initiates an eager Val Cooper into her organization.

Firsts and Other Notables
This issue establishes more information regarding Haven, specifically the notion that her self-help/guru routine is a front for a more villainous terrorist organization, one which carried out the Kennedy Center bombing in issue #95. The idea is that Haven believes the New Humanity, a blend of humans and mutants, will arise following a series of disasters called the Mahapralaya, which will significantly reduce the planet's population and force the remaining mutants & humans into harmony as a result. However, she is not willing to wait for those disasters to occur naturally, so she has been orchestrating various terrorist attacks and disasters around the world to trigger the Mahapralaya. 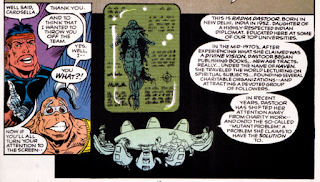 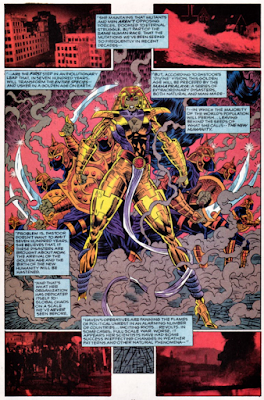 At one point, Haven references being spoken to by a "he", suggesting she is receiving orders/directions from someone; this will turn out to be the unborn fetus inside Haven, the mutant whose powers Haven is technically using. 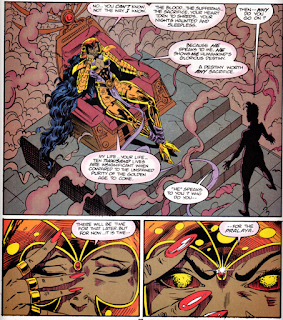 The issue ends with Val Cooper seeming being inducted into Haven's organization (something called a "Prayala", a smaller, more individualized version of the larger Mahapralaya Haven is attempting to bring about); it will shortly be revealed that Val is infiltrating Haven's group in an attempt to bring it down, but she will play the role of devoted follower for the next couple issues.

A Work in Progress
Madrox Prime, fed up with his constantly-arguing dupes, tries to reabsorb them all, but is unable to absorb two. 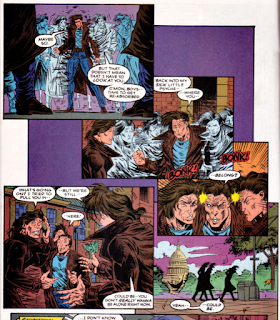 Rahne & Guido have a nice discussion about religion and how it can be twisted and misused before Random shows up. 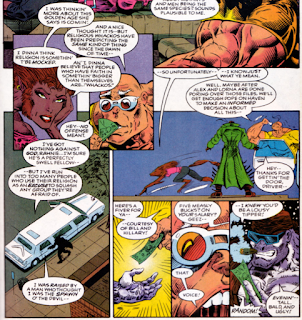 Artistic Achievements
A handful of panels in this issue use as a background black-and-white photos of actual places (like the Lincoln Memorial). 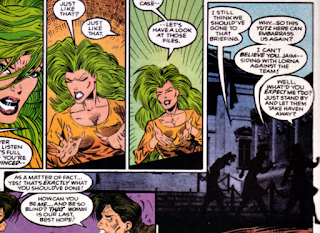 Austin's Analysis
With the big climax of the Haven storyline set to occur in issue #100 (the letters page is teasing as much here), this issue is meant to establish the flip side to Haven's altruistic saving of Polaris in the previous issue, making it clear that readers are at least supposed to suspect her of being a villain for reasons beyond Xavier's suspicions and/or a general suspicion of New Age mysticism and cult-like thinking. But the real conflict is between Polaris (and one of Madrox' dupes) and the rest of the team, with Polaris (not incorrectly) pointing out that the same government that sent agents to attack her (and hired Random to kill her) are providing the intel that Haven is a Bad Guy. While its appreciated that even as he's building up the story's Big Bad DeMatteis keeps the focus of the issue on the interpersonal interplay between the characters, Polaris' continued defense of Haven seems a little too forced: her point about the government is a good one, but while she has plenty of reasons to distrust the government, DeMatteis hasn't done enough to justify her continued defense of Haven specifically. As a result, the ongoing debate amongst X-Factor in this issue can get a little shrill and repetitive, even as it quietly builds up the threat of Haven.