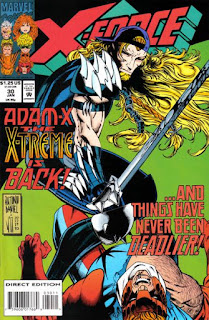 "Something Worth Fighting For"
January 1994

In a Nutshell
Shatterstar battles Adam-X inside Murderworld

Plot
Shatterstar & Adam-X fight one another inside Murderworld, with Arcade revealing that the innocent life he's using to motivate Adam-X is none other than Windsong, Shatterstar's wife. Meanwhile, Tempo departs from Camp Verde, after which Domino arrives. Elsewhere, Siryn asks Warpath to accompany her home to Ireland, while in Ireland, Black Tom & Juggernaut return to Cassidy Keep. Inside Murderworld, Shatterstar reveals that Windsong is just a hologram, prompting Adam-X to team up with him to against Arcade. They reach the control room, where Arcade reveals the real Windsong, but Shatterstar recognizes her as a fake too, and proceeds to stab himself in the chest as a distraction that allows him to get close enough to Arcade to stab him, only to discover Arcade is a robot as well. Later, Adam-X departs to track down the person who hired Arcade to target him, while Shatterstar is picked up by Rictor, with Shatterstar calling his day uneventful.

Firsts and Other Notables
Domino arrives in this issue, having answered Cable's call for help, making this technically the issue where she joins the team (as her previous stint with the group was actually Vanessa impersonating her, as she points out here, and her appearances in the series after that had her working independently from X-Force. She will remain part of the group (bouncing back and forth between this series and Cable) in one way or another more or less until the series is relaunched under Peter Milligan & Mike Allred. 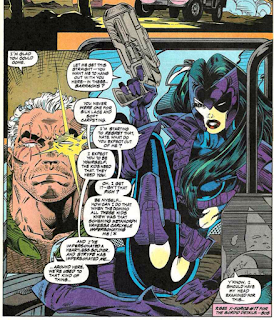 This issue marks the first, and to date only, appearance of Windsong, Shatterstar's wife back on Mojoworld (and even then, she doesn't really appear here, instead appearing only as a hologram and robot duplicate). Shatterstar recognizes the second Windsong as a fake when she mentions how much she's missed him; he later reveals the pair has never actually met - they were simply predetermined to have their genetic material mixed to produce offspring (I guess they must have seen pictures of each though, at least, since Shatterstar recognizes the holographic Windsong on sight). 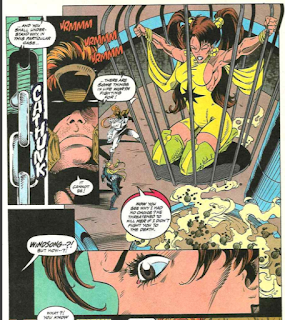 It's confirmed here that Major Domo, Mojo's long-suffering assistant, paid Arcade to take out Shatterstar, though presumably it's a different Major Domo serving a different Mojo than the one we've seen before, as technically, Shatterstar is from the Mojoworld of the future and thus wouldn't be hunted by the Mojo we all know.

Adam-X, meanwhile, was targeted by a Mr. Milbury which is, of course, a frequently-used alias of Mr. Sinister (this is the third time we've seen it used), though this issue doesn't make that clear. I don't believe Sinister's beef with Adam-X is ever followed-up on, though it presumably ties in with whatever ultimately-scuttled plans Nicieza had for revealing Adam-X to be the third Summers brother.

Tempo leaves Camp Verde this issue, declining Cable's offer to join X-Force in favor of trying to start a normal, non-fighting/terrorist life for herself. She'll next appear in issue #67. 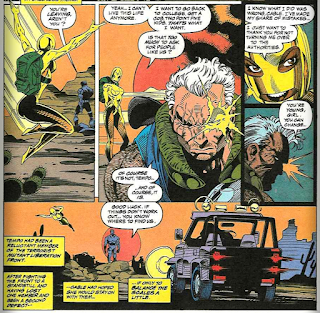 Siryn asks Warpath to join her for a trip back to Ireland (everyone in X-Force is going home, apparently), setting up the events of next issue. 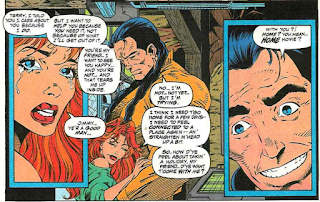 Similarly, we see Black Tom & Juggernaut, appearing (for us) for the first time since the Deadpool limited series, arrive at Cassidy Keep. 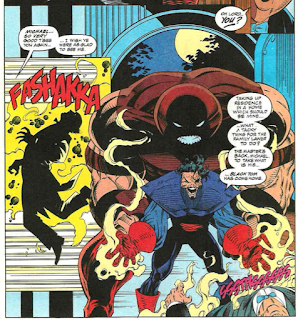 The Chronology Corner
This issue takes place before Cable #6-8.

A Work in Progress
If anyone cares, those little knives Adam-X throws around are "thet'je spikes".

The Cable Guy
Cable notes that while Vanessa was impersonating Domino, Cable was impersonating a heartless soldier, which hangs a lampshade on Nicieza's recent efforts to to subtly retcon and develop Cable's character beyond his earlier one-note Liefeld characterization.

The Grim 'n' Gritty 90s
As Adam-X shouts out "burn" shortly before electrifying the blood of Arcade's troops, Shatterstar declares he needs a byword to call out in battle. Adam-X suggests "bleed". 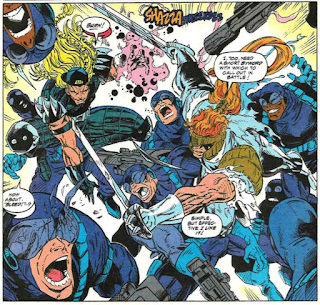 Artistic Achievements
When Shatterstar stabs himself to, apparently, distract Arcade, (an echo of New Mutants #100, in which he stabbed through himself to get a bad guy), the blade seems to disappear into his body and not stick out his back (whereas before, his sword seemed to grow in size so that it could go through two bodies and still stick out the other side). 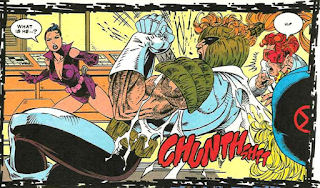 Austin's Analysis
An issue-long Shatterstar vs. Adam-X (the X-treme!) fight could only be more 90s if Rob Liefeld was drawing it, but this actually isn't terrible. It's not great - it *is* a lot of poorluy-drawn Shatterstar/Adam-X fighting, and Nicieza seems to get in his own way with the overly-complicated Windsong ruse (it took me a few passes to figure out how Shatterstar could both recognize her on sight but also know she was fake because they'd never met, and I'm still not sure that stabbing himself was the best play at the end there) - but it could be worse. Daniels draws a nice Arcade (and Juggernaut), and the downtime stuff with the rest of X-Force is decent subplot/setup material. It's hard to get excited about an issue like this, but it is to Nicieza's credit that he's slowly developed these characters into more than just 90s stereotypes enough so that an issue like this is at least readable.