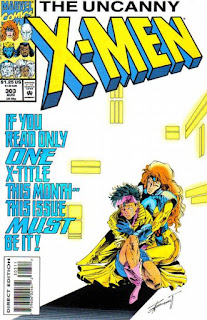 "Going Through the Motions"
August 1993

In a Nutshell
The death of Illyana

Plot
Jean Grey seeks out Jubilee, asking if she wants to talk about what she's feeling. Jubilee is reluctant at first, but soon she opens up, admitting she shouldn't be surprised by what happened. A few hours ago, Jubilee was keeping an increasingly-ill Illyana company along with Kitty while Xavier & Moira worked desperately to stop the spread of the virus making her sick. Annoyed by how close Kitty & Illyana were, Jubilee left to check on Xavier, and was saddened by how despondent he was. Then Illyana suddenly went into cardiac arrest, and Xavier was forced to use a piece of Shi'ar technology to keep her alive, albeit in a coma. Kitty argued that consigning her to that fate was worse than death, and as they argued, Jubilee picked up Illyana's bamf doll and placed it in her arms, doing what she could to make the girl happy. Shortly thereafter, the X-Men returned from Dallas to find Xavier waiting to break the news of Illyana's passing to a stone-faced Colossus, leaving Jubilee to ask Jean why, if the X-Men can save the world every day, they couldn't do zip to save one little girl? She tells Jean that what she's feeling more than anything is that she wants to be left alone, but Jean hugs her, saying that while everyone enters and leaves the world alone, the time they spend in between, together with other people, is what makes life worth living.

Firsts and Other Notables
This issue marks the death of Illyana, as she succumbs to the illness that's been plaguing her since X-Men #19, making her the first significant (and, arguably, most significant) character to die as a result of Stryfe's Legacy Virus (it's a death that mostly sticks, too, with the character not returning until the late 00s in the form of her older New Mutants-era self, and given the loophole Louise Simonson wrote into the "death" of her teenaged self and the nature of her powers, her return isn't as egregious as some others).

Her death will, obviously, have a significant impact on Colossus, serving as the catalyst to his upcoming actions in the rest of "Fatal Attractions", but the character herself, at this point, is mostly a cipher, with any readers who do remember her/have specific fondness for her most likely remembering/appreciating that teenaged New Mutants version of the character, who is already long gone at this point. As a result, while her death here is significant, it's more because of the impact it has on other characters and what it represents in terms of raising the stakes of the Legacy Virus plotline.

Richard Bennett, who received an official "welcome aboard" when he inked last month's issue of X-Force, is credited as a "special guest" artist here. Clearly, somebody was expecting big things from him, though he never really does much beyond the occasional fill-in/one-off (like here).

This issue came bound with a "Hunt for Magneto" card, part of combination X-Men/Avengers 30th anniversary and Sega Genesis Marvel games promotion. The cards were only available through the promotion, either bound in comics or via mail-away, and I believe there was a scratch-off box that enabled you to try and win Sega games and other such prizes. Assorted X-Men and Avengers issues over the next few months each have one of the cards bound in, which are super annoying because they make the comic hard to read (being thicker than the pages and positioned awkwardly in the middle of the book).

Collection Recollection
I still vividly remember when I first read this issue, in a booth at a Marie Calendars (back when they had restaurants and not just frozen food) after buying it at the nearby Shinders, while my mom and I waited for our food to arrive (I had ordered chili and cornbread). That Marie Calendars shortly thereafter became a series of different restaurants, before the building was torn down and replaced with first, an Office Depot, and then, a furniture store. And while I remember all that and can still picture the view of the restaurant from our table in my mind's eye, I don't remember why my mom and I were having dinner that night without my dad and brother, nor what my mom would have been doing while I was somewhat rudely reading, leaving her to entertain herself, because memory is weird like that.

A Work in Progress
A narrative caption refers to Jean as being a "genetic template" for Phoenix.

In a bit of characterization I've always enjoyed, Jubilee doesn't really like Kitty and is mildly annoyed by her presence and familiarity with Illyana, which is especially fun considering Jubilee is essentially the new/current Kitty on the team. 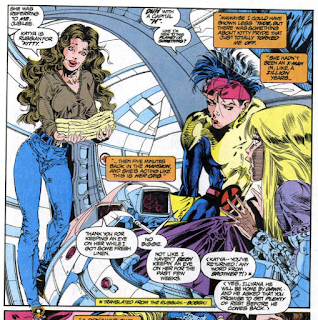 Jubilee is left out while Illyana and Kitty speak in Russian, which begs the question of why Xavier doesn't just telepathically teach Jubilee Russian (or Illyana English for that matter), considering the only reason Kitty can speak Russian is because he did the same for her back in the day.

Jean gives Jubilee a primer on Illyana's history, which of course serves the same function for any new readers who aren't intimately familiar with her older New Mutants role. 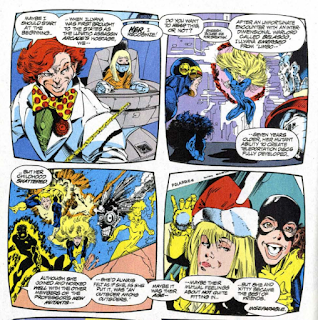 One of those grammatical errors I have hard time ignoring, Jean says "reverted back", which is redundant (to revert is, by definition, to go back).

It's noted that after Illyana was restored to her childhood age, Kitty stayed in touch with her via letters, something we've never actually seen before. 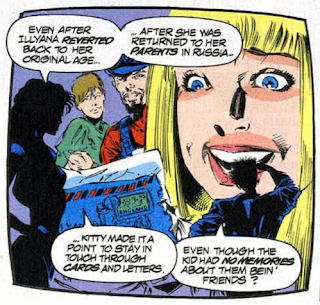 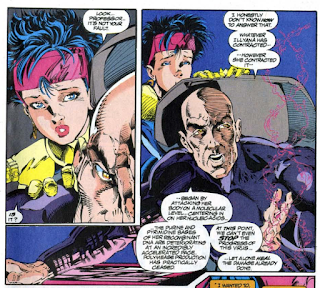 Jubilee makes a crack about how no self-respecting adult would call herself "Kitty".

In hanging out with Kitty and Illyana, Jubilee admits that it was, briefly, the first time she'd felt normal since her parents died. Jubilee's past as an orphan living in the mall after her parents died doesn't get referenced very often, but this was an effective reminder of it. 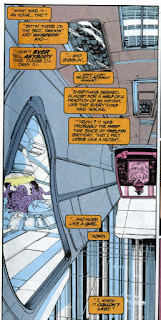 Storm notes that Fitzroy has been taken into federal custody following the beating he received from Colossus last issue. 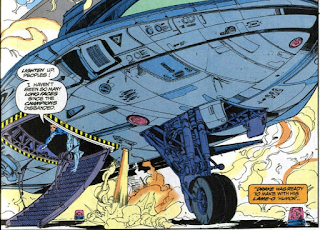 Colossus' reaction to news of Illyana's death is notably quiet. 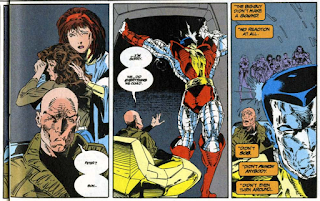 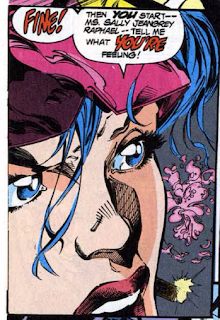 For Sale
The "Entertainment This Month" ad in this issue features Bishop's trading card from the fourth Marvel Universe series, and not to beat a dead horse, but it once again highlights the fundamental flaw of that set, as the card looks less like a whole image unto itself and more like a cropped part of a larger whole (which is what it is). 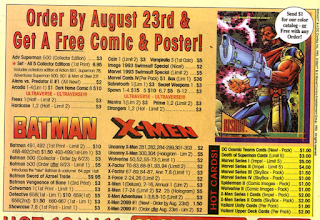 There's an ad for the console release of Mortal Kombat. 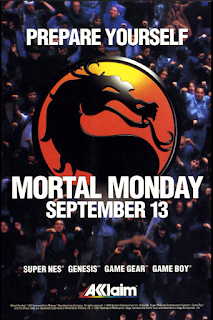 Austin's Analysis
While this is technically another of Lobdell's Quiet Issues (albeit a pre-crossover one instead of post-crossover), it's also so much more than that. Even without the benefit of hindsight, Illyana's fate had been telegraphed pretty obviously in the lead-up to this issue; reading it for the first time as a teenager back in the day, I went in knowing full well it would be chronicling the character's death. But the issue isn't trying to shock readers; instead, it's a relatively measured look at grief, and the way it can affect someone, even someone fully anticipating the grief, even someone without a deep personal connection to the victim.

Though Illyana dies in this issue, it really isn't about her. Illyana, especially at this point in time, is largely a prop: she is important to other characters, like Colossus and Shadowcat, and her plight has larger narrative concerns for the franchise, but even old school readers who remember the character's New Mutants' heyday with lingering fondness are remembering a different Illyana, one whose absence has already been dealt with. So instead, Lobdell focuses on Jubilee, a character who has had a more immediate impact on readers and whose age relative to the rest of the characters allows her to express a more raw form of grief. And by focusing on Jubilee, a relative stranger to Illyana, instead of her brother or best friend, it allows Lobdell to depict a more general feeling of helplessness that follows a loss of life: strip away the Shi'ar technology and Legacy Virus and superpowers and this is essentially a story about a grieving young woman asking people older, smarter and more accomplished than her why they couldn't save the life of a perfectly innocent little girl.

It's powerful stuff, and filled with lots of affecting, familiar moments, from Jubilee wanting to comfort Xavier but stopping herself, to the moment when Jubilee places the Bamf doll in Illyana's hands, wanting to do SOMETHING, however fruitless, to help the girl, to Jubilee's surprise at Colossus' non-reaction to his sister's death. Coming at the near-height of garish 90s excess in comics, this issue a surprising and much-appreciated examination of basic human emotion, which pushes the trappings of the period to the background. Yes, this issue was hyped to high heavens, and yes, it's bound with a promotional trading card and yes, it serves as a lead-in to another crossover issue, but it can also be lifted neatly out of that setting to stand simply as an examination of the grief one child feels for the unjust and inexplicable death of another child. It's a highlight of Lobdell's run, of the era, and of the series as a whole.

Next Issue
Tomorrow, Illyana's death reverberates in X-Factor #93. Friday, Jubilee and Wolverine go down under in Wolverine #72. Next week, Cyclop's family expands in X-Men #23.