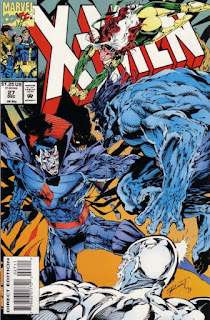 In a Nutshell
Thenody debuts & Infectia dies of the Legacy Virus

Plot
In LA, the powers of a mutant woman named Thenody flair out of control, killing a pair of police officers. At a nearby hospital, Rogue, Beast & Iceman check on Infectia, who is dying of the Legacy Virus. They meet Dr. Nathan Milbury, who takes a blood sample from Infectia, then mysterious disappears. At the X-Mansion, Revanche & Psylocke spar. In LA, the X-Men track down the lab of Gordon Lefferts, the doctor Infectia came to LA to see. Inside the lab is Threnody, whom Mr. Sinister approaches and offers a role helping him find a cure for the Legacy Virus. Rogue attacks Sinister, telling him she won't let him use another mutant for his twisted goals. But Threnody's power - which is triggered when she's around people suffering from the Legacy virus - activates again, and Beast overrules Rogue, declaring that Sinister- a scientist with no morals - has a better chance of helping her than the X-Men. Later, Beast returns to the hospital, and carries Infectia out onto a ledge, allowing her to see one final sunrise before she dies.

Firsts and Other Notables
Infectia, the mutant who targeted Iceman & Beast in an attempt to gain control of X-Factor's ship in X-Factor #29-31 (and is responsible for Beast's current blue-and-furry state), returns in this issue, having been infected by the Legacy Virus. She in turn succumbs to the disease at issue's end, making her arguably the second-most notable character to die from the disease to date (after Illyana). And, thanks to the fact that she is a relatively obscure character whom no one is clamoring to bring back, she also probably holds onto that distinction, as characters more notable than her who die of the disease (like Illyana) have since been resurrected, but Infectia has stayed dead (really, where she ranks in the hierarchy of "stayed dead Legacy Virus victims" depends on your feelings about Revanche). We also learn Infectia's real name is "Josephine". 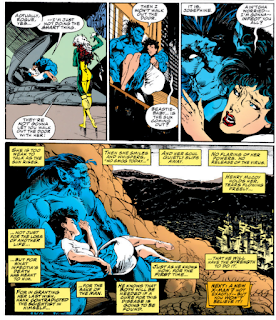 After receiving an entry in the Stryfe's Strike File oneshot, this issue marks the first actual appearance in a story of Threnody, a young female mutant with the ability to absorb energy from the dead and dying, then release that energy as a concussive blast. As a result, she also possesses an innate ability to sense when someone is dying, as she is drawn to their "necro-energy". Here, her ability is said to be died specifically to the Legacy Virus (that is, she can sense mutants dying of the disease and can only absorb their energy), but later stories will show that her power works amongst all the dead and dying. 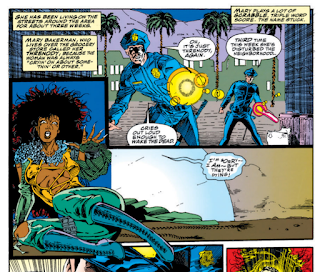 Here, she throws in with Mr. Sinister, who promises to help her gain some control over her power in exchange for her leading him to more Legacy Virus victims for study. She'll pop up in a couple issues in that capacity, and that may have been the end for the character, if she hadn't been scooped up to serve as supporting cast/love interest for X-Man in his solo series, where she'll appear pretty regularly for a couple years before disappearing into comic book limbo. 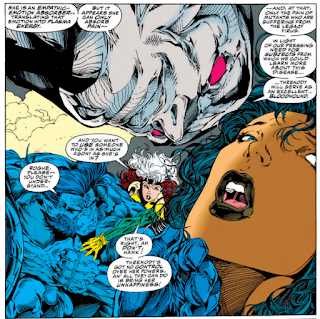 Incidentally, "threnody" is another word for a lament, or a song of mourning, a word I learned thanks to the character Thenody back in the day (to this day, I've only ever heard it in the context of this character).

Mr. Sinister uses the alias of "Dr. Nathan Milbury" in order to get a sample of Infectia's blood; Nathan Milbury was also the name of Cyclop's grandparent's neighbor who turned out to be Sinister in issue #23 (the Further Adventures of Cyclops & Phoenix miniseries will establish why the name "Milbury" has significance for Sinister).

Also, it's never made explicit, but Gordon Lefferts, the doctor Infectia came to LA to see, is Mr. Sinister's assistant, seen in X-Force #18 opening the canister Sinister receive from Stryfe, and considered the first person to become infected with the Legacy Virus.

Mr. Sinister admits he's looking for a cure to the Legacy Virus, in part because it threatens his plans for Scott & Jean- while we'll see a bit of his continued search for a cure in future issues, this mostly falls by the wayside (as all too many "cure for the Legacy Virus" teases ultimately do). 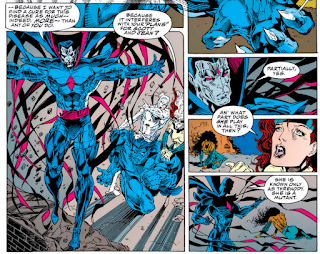 There's a bit of mystery seeding at the end of the issue, as Threnody's power activates while the X-Men and Mr. Sinister are at Leffert's lab. Because it's said here that Threnody's power activates around Legacy Virus victims, and the group isn't near Infectia, there's an open question as to whom activated her power. This doesn't actually lead anywhere - none of the characters here end up infected with the virus, though I believe the intent was to tease that Sinister had it (hence his desire for a cure). 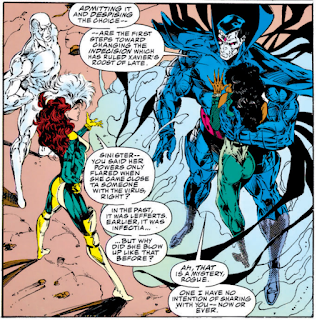 A Work in Progress
It's stated here that the Legacy Virus kills mutants by turning their powers against them, one of several "how the Legacy Virus kills its victims" we'll get during the course of the plotline (in Uncanny #303, Xavier gave a techno-babble explanation that basically amounted to "the disease is destroying Illyana's DNA"). 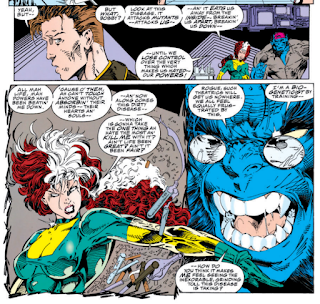 As Dr. Milbury, Mr. Sinister makes explicit the thematic parallel between the Legacy Virus and the AIDS epidemic. 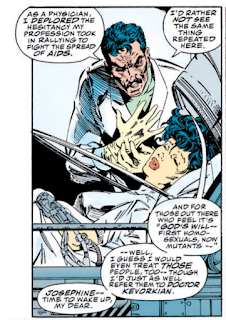 He also questions the use of the name "Legacy" to describe the virus. 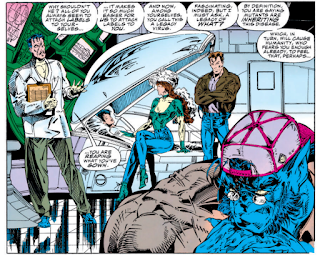 Despite being treated at a regular hospital, Infectia has been placed inside an environmental pod that looks an awful lot like the one Illyana was in shortly before she died. 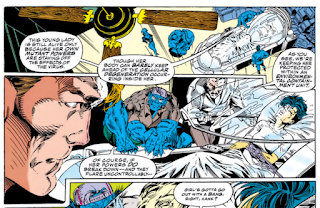 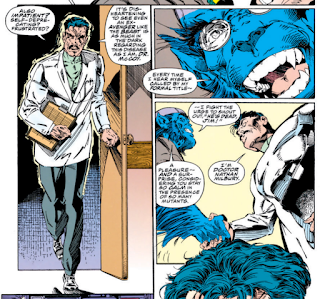 Artistic Achievements
In a brief interlude in which Psylocke & Revanche yell at each other about the way Revanche is handling having the Legacy Virus, it's almost laughable how much the two look alike (when Psylocke's whole deal is that she went from being Caucasian to Asian). 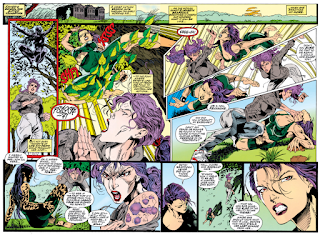 Austin's Analysis
It goes without comment in this issue, but I've always kind of liked how Iceman and especially Beast express a certain level of sorrow about Infectia's fate, despite her having previously tried to kill them. For one thing, however unintentional, her efforts did ultimately cure Beast of the "the stronger he gets, the dumber he gets" disease he was infected with by Pestilence, and for another, I feel like there's some metatextual commentary in the way Iceman & Beast can set aside the sort of external, Silver Age-y threat Infectia posed (what with her physically-monstrous but sort of goofy looking Anti-Body henchmen) in the face of the far more insidious threat of a disease targeting mutants. It seems like kind of a "in simpler times" mentality, in which we often remember the past with rose-colored glasses, and what seemed like a big threat to these characters back then has been outshined by current events.

Beyond that, this issue is, in a couple ways, a pretty great encapsulation of the post-Image Exodus, pre-"Age of Apocalypse' X-books, and the X-books of the early 90s in general. First, it builds up the suspense surrounding a looming threat - specifically, in this case, the Legacy Virus. Ultimately, the Legacy Virus will turn into those plotlines that is mostly all build-up (in large part because nobody quite knew what to do with it beyond "build it up" and "cure it"), but at this point, we're still deep in build-up mode, and this issue does a lot to make the threat seem like a Big Deal (in part via the cheap trick of killing off a pre-existing but relatively inconsequential character, a trick that bothers me far more now than it did when this issue was first published), building on the recent death of Illyana.

Secondly, in killing off a minor character to build up the threat du jour, it pokes around in the nooks and crannies of X-history and comes  up referencing a long-forgotten bit of lore. While the future Image guys were more concerned with moving away from X-history in the immediate wake of the '91 relaunch, both Lobdell & Nicieza are more willing to embrace the past and use elements of it in their stories. Here, Nicieza dusts off a relatively deep cut in Infectia. I'm on record as being a big fan of Simonson's underrated X-Factor run, and at the time this was published , her issues of X-Factor were the ones most available to me as back issues. I was tickled to see one of those characters pop up in a current issue. She's hardly a great character (then or now), but just seeing a callback to a little-referenced story I nevertheless knew made me feel "in the know" back in the day.

So toss in the especially Jim Lee-esque art and a featured role for a cryptic Mr. Sinister (who made a cottage industry at this time of popping up in books to drop vague pronoucements and let his invulnerable body accept some blows before disappearing) along with the focus on the Legacy Virus and the cheap tactic of bringing back an underused (if not terribly compelling) character just to build up a current threat, and this issue stands as a pretty good microcosm of 90s X-books. I loved it back in the day, and it's just such a great representation of a specific time in the history of the X-Men, that I have a hard time not enjoying it now.

Next Issue
Tomorrow, Shatterstar faces off against another classic X-baddie in X-Force #29. Friday, Excalibur settles in on Muir Island in Excalibur #72. Next week, a proposal in Uncanny X-Men #308.