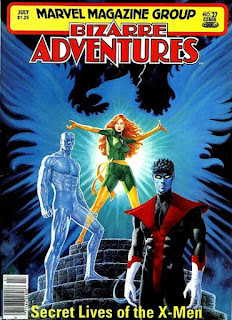 In a Nutshell
A trio of tales featuring Phoenix, Iceman & Nightcrawler

Plot
1st Story: Visiting her sister's grave, Sara Grey recalls the time in which she and Jean were kidnapped by the undersea warlord Attuma and transformed into water-breathers, part of Attuma's plot to breed super-powered children to conquer Atlantis. But Attuma was unprepared for the power of Phoenix, allowing Jean and her sister to escape. Afterwards, Jean wiped Sara's memory of the events, but her memories returned upon Jean's death, and now Sara is less apprehensive about the idea of her children being mutants.

2nd Story: While visiting a college campus, Iceman helps foil a plot to steal some sophisticated computer equipment given to the school by Dr. Hank Pym. In the process, he comes to appreciate the old superhero lifestyle once again.

3rd Story: The X-Men are alerted by Cerebro to the return of Vanisher, who is stuck halfway between teleporting after an encounter with Darkstar of the Champions. When Nightcrawler touches him, the two are transported through the Darkforce dimension to another world, where their teleportation powers don't work. After consulting an oracle for help, Nightcrawler forces Vanisher to enter the Well at the Center of Time with him, which takes them home, just moments after they left.

Firsts and Other Notables
Part of Marvel's black-and-white magazine imprint, Bizarre Adventures began life as Marvel Preview (in which Star-Lord, of Guardians of the Galaxy fame first appeared) but was renamed with issue #25, after which it ran stories featuring more mainstream Marvel characters, including the trio of X-Men featured in this story.

The first story, featuring Jean Grey, is the source of the Jean's backstory referenced in "Inferno", in which a ten year old Jean telepathically experiences the death of her friend Annie Richardson, after which she becomes withdrawn and is eventually taken to Professor X for treatment. It also reveals that Jean's telepathy is an innate ability of her own, in addition to her telekinetic powers, and that when Xavier "gave" her a portion of his telepathic power back in the Silver Age, he was actually just removing the mental blocks he'd placed on that ability when she was a child. 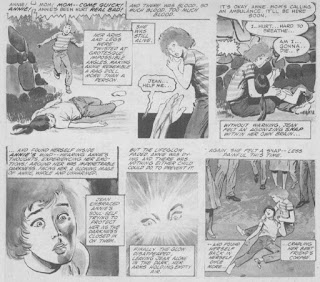 The second story features Iceman, while in college, visiting another school, and helping foil a plot to steal a computer. It ends with him having enjoyed being a superhero again (since he's been more or less retired while in school) and seems to suggest he's going to re-enter that world, seemingly as a setup for something else, but nothing ever really comes of it, and it won't be until years later, when Iceman joins the New Defenders, that he's featured regularly in a series again.

The third story is a Nightcrawler adventure drawn by Dave Cockrum, and Cockrum will later reference it in his Nightcrawler miniseries.

It also features Vanisher, the teleporting mutant who first appeared in X-Men #2. As the issue begins, Vanisher is stuck halfway between a teleport, as seen in his last appearance in Champions #17 (a nice bit of continuity), and is covered with some of Darkstar's Dark Force energy. He proceeds to appear wearing the energy like an all black body suit in this story, and is able to control it to some degree) While he seems to lose it by the end of the story, he appears wearing something similar in X-Factor #12, when he's running a gang of thieves including Boom-Boom, and I wonder if Walt Simonson in that issue used this story as a reference for his look, and just assumed the black look was a regular jumpsuit. 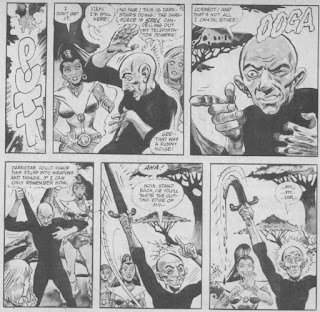 Sara Grey worries that her children might be mutants; they will in fact turn out to be mutants, and while there were once bigger plans for Sara and her kids, ultimately Sara will die off-screen, and her kids will eventually be kidnapped by Nanny prior to "Inferno", after which they'll make a handful of appearances.

Each issue begins with a proto-Handbook "data log" providing information on each character. 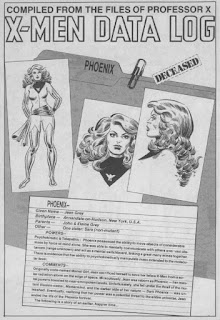 The Iceman story was later reprinted, in color, in the X-Men Rarities trade (which is where I first encountered it). As far as I know, the other two stories have never been reprinted, which is odd, at least given the stuff established in the Phoenix story.

The Chronology Corner
The framing sequence of  the Jean Grey story, featuring Sara Grey, takes place after the death of Phoenix in X-Men #137 (she is visiting "Jean's" grave), while the events of Sara's flashback take place between X-Men #109 and #110.

Iceman appears in his story after X-Men #146 (in which he served on the "reserve" X-Men team during the Arcade/Dr. Doom story) and prior to his appearance in Avengers #211.

The Nightcrawler story is set after X-Men Annual #3 and before issue #125.

A Work in Progress
In Jean's flashback, Professor X is described as having just returned from the near east, following a tragic accident. He's also said to be a master of a score of academic disciplines, perhaps Claremont's way of explaining all the gadgets & gizmos he created in the Silver Age. 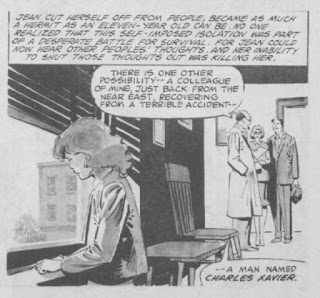 Attuma's plan to make breeding stock of super-powered women in order to create a bunch of super-powered kids he can use to fight Namor, aside from being, you know, skeevy, also seems like a really long-range plan. I mean, he's got to find, kidnap and impregnate a bunch of women still, then the kids need to grow up, be trained in the use of their powers, etc. He's looking at, at the minimum, a good ten years before he can reasonably expect this plan to pay off.

Cerebro alerts the X-Men to Vanisher's plight, with the idea being that this half of him is appearing just now, months after the accident with Darkstar. But Vanisher is a known mutant, and at this point, Cerebro is pretty well-established as only sounding alarms when a new mutant manifests (it can, of course, find any mutant, but only when directed to).

In Nightcrawler's story, the X-Men are flying a ship that looks an awful lot like the ship they stole from Larry Trask's Sentinel base in X-Men #60. 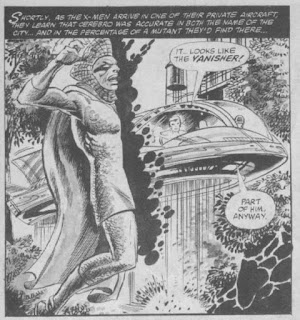 Nightcrawler's rarely-referenced ability to become invisible in shadows is referenced.

I Love the 80s
The Jean story does one of those comic book things where the bulk of it is meant to depict Sara's memories of the events, yet in the course of her recollection, Jean in turn has a flashback to an event in her childhood. So, like, at that point in their trip, did Jean tell Sara about what she was thinking about?

The plot of the Iceman story is centered around the theft of computer equipment from a college.

Watching a movie with Nightcrawler, Colossus finds Zorro to be pleasingly Communist. 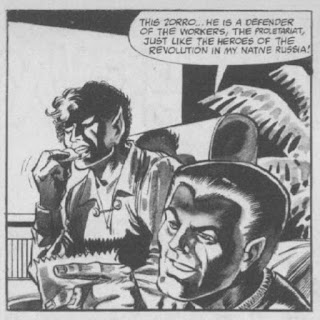 Artistic Achievements
Jean & Sara are said to have blue skin after being transformed by Attuma into water-breathers, but of course, we can't see that since the art is black and white.

Similarly, aside from one scene where Jean swims away from some guards, most of the underwater scenes don't look like they're taking place underwater; for example, Jean, Sara & Attuma at one point are seated around a table with food laid out on it, and nothing appears to be floating or set out differently to account for being underwater. 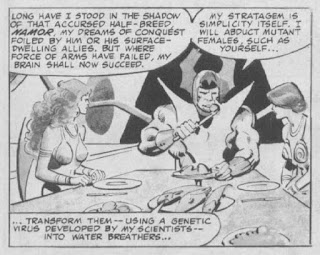 "Professor Xavier Jean Grey is a jerk!"
Sara says that Jean initially erased Sara's memory of her encounter with Attuma, but then the block wore off after Jean died. It's not really clear what the detail adds, either in-story or out.

Austin's Analysis
Of the three stories in this issue, the standout of the bunch (if only for the way it's been referenced outside of this issue) is the initial Phoenix story, mostly because of a couple of pages in the middle of the story which provide the first bit of backstory for Jean Grey, including the fact that her telepathic power is innate, and not "borrowed" from Xavier. The rest of the story, with Namor/Avengers villain Attuma kidnapping Jean and her sister to use as breeding stock gives Buscema some sword-and-sorcery type stuff to draw (his bread-and-butter ) and works as another eulogy for the then-deceased Jean, but is otherwise fairly rote.

But the whole Annie Richardson/connected to her dying mind/telepathy suppressed by Xavier business will be referenced occasionally going forward (notably during "Inferno", which is where I first encountered it), and while the details themselves are fairly standard "tragic origin" material, it gives a pre-X-Men Jean the kind of backstory her male counterparts received via the back-up stories in the Silver Age (and certainly works better than "kidnapped by a diamond-themed villain" or "threatened into helping a Conquistador-themed villain"). Jean was, until Phoenix came along, the least developed of the original X-Men, rarely getting much in the way of characterization beyond "the girl" or "the weak girl". Phoenix did a lot to rectify that, but it propelled the character forward; this, finally, gives her some background.

Of the other two stories, the Iceman one is the most forgettable. The George Perez art is certainly nice, but his tendency to draw everything possible in every panel hinders it a bit, as the whole thing is rather busy, especially in the scenes with snow falling. It's also hurt by seeming to suggest the setup of a new status quo for the character that never really materializes. The Nightcrawler story is essentially a prelude to his later miniseries (both in terms of tone and specific plot elements), and while my patience for the kind of swashbuckling whimsy that characterizes both stories is limited, there's no denying that Cockrum's art in this story is gorgeous, especially in black-and-white. I also have a soft spot for Vanisher, probably my favorite of the second-tier villains introduced in those early Lee-Kirby issues of the series.

But ultimately, it's the Jean Grey story that led me to this issue, and which remains the most notable thing about it. Even if it's just for a handful of pages stuffed into the otherwise-unrelated plot.

Next Issue
Regular X-aminations start back up, with Cable #1-2 and Excalibur #56.
Newer Post Older Post Home
Posted by Austin Gorton at 12:00 PM