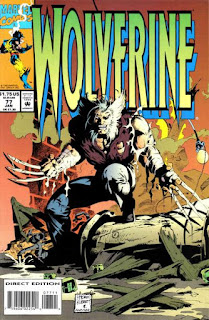 In a Nutshell
An adamantium-less Wolverine fights Lady Deathstrike.

Plot
Lady Deathstrike attacks Wolverine, and their ensuing fight destroys most of Heather Hudson's home. When Wolverine is forced to pop his bone claws and Lady Deathstrike realizes both that he lost his adamantium and that his healing factor is barely working, she breaks off her attack, saying that while she may have been cheated out of her revenge, she won't give up her honor by killing Wolverine while he's in that condition. As she and Ronald Paravenue leave, they are approached by Cylla & Bloodscream, looking for Wolverine. Lady Deathstrike tells them she no longer seeks his death, but won't stop them from tracking him down, and they continue to do so. Back at Heather's house, Wolverine says goodbye to her and Puck, then heads north to Buffalo Wood, not realizing that Cylla & Bloodscream are close behind him.

Firsts and Other Notables
Lady Deathstrike learns that Wolverine has lost his adamantium skeleton & claws in this issue, and essentially calls off her blood feud with him, since the adamantium was the motivating factor behind it (she also finds it unseemly to just kill him for kicks while in his weakened state). 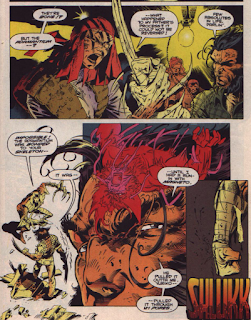 In perhaps an indication of production issues/lateness, the cover to this issue is essentially a recolored reproduction of the interior splash page in which Wolverine first reveals his bone claws to Lady Deathstrike with the dialogue bubbles removed. 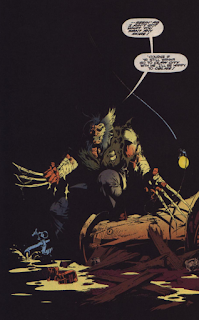 Cylla (the former pilot turned into the new Skullbuster Reaver by Donald Pierce, last seen in issue #57) and Bloodscream (the vampire and former partner of Roughhouse in the early issues of this series, who last appeared in issue #17) both pop up at the end of the issue, tracking Wolverine; they will feature more heavily in the next issue. 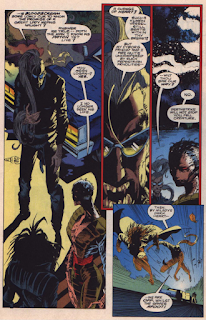 At the end of the issue, Wolverine is heading to Buffalo Wood, the Canadian national park where he first encountered Hunter in Darkness and was found by a honeymooning Jim and Heather Hudson shortly after escaping from the Weapon X project.

A Work in Progress
Puck notes that he has a personal beef with Lady Deathstrike after she knocked him out of his boat in issue #37.

When Lady Deathstrike takes her leave of Wolverine, she does so by...extending her neck...and mildly transforming into...some kind of rocket? I have no idea what that is all about, and I'm fairly certain we never see Deathstrike do anything like it again. 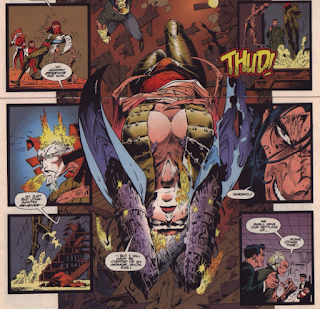 The Best There is at What He Does
Lady Deathstrike also realizes that Wolverine' healing factor is severely overtaxed. 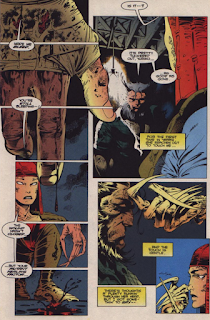 Austin's Analysis
The conclusion to Wolverine's first post-adamantium confrontation with Lady Deathstrike goes about how one would expect, with the villain breaking off her attack once she learns that Wolverine has lost his metal bones, but a story doesn't have to be unexpected or surprising to be good. Kubert in particular helps elevate the material here, injecting the Wolverine/Deathstrike fight scenes with a lot of energy, and depicting a particularly grotesque Lady Deathtrike (with extended limbs and whatnot) along the way. A lot of this series' upcoming stories will hit similar beats as this one (introduce an old foe of Wolverine's and show how things have changed now that he's metal-less; heck, this issue sets up two more such encounters for the next issue), but they're necessary beats to really sell the impact of Wolverine's recent changes, and this issue shows how hitting such beats can still be entertaining, even if they are expected.