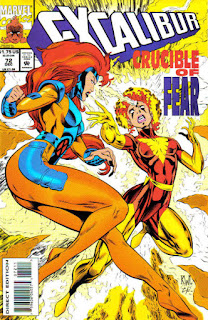 He wrote it: Richard Ashford
He drew it: Ken Lashley
They inked it: Andy Elliot & Cam Smith
He lettered it: Pat Brosseau
They colored it: Garahy & Matthys
She edited it: Suzanne Gaffney
He grouply edited it: Bob Harras
He chiefly edited it: Tom DeFalco

Plot
The Gamesmaster is tasked by a mysterious figure with acquiring the DNA mapping of Moira's son, Proteus. On Muir Island, Moira tests Excalibur in the Proteus Room, a virtual reality version of the Danger Room. Elsewhere, Gamesmaster charges Siena Blaze with acquiring the data from Moira and promising Siena points in the Upstarts competition for killing her. On Muir Island, Excalibur settles in to their new cottage home when they receive word of a fire on a nearby oil rig. Working together, they manage to rescue the workers and put out the fire. Meanwhile, scientist Rory Campbell hires a ferry to take him to Muir Island. Back on the island, Sienna Blaze, who set fire to the oil rig as a distraction, attacks Moira. With Phoenix sensing the danger, Nightcrawler & Shadowcat attempt to teleport to her side, but Sienna senses Nightcrawler's disruption of the EM field, and shifts his location slightly so that they materialize inside solid rock.

Firsts and Other Notables
This issue marks the first appearance of Dr. Rory Campbell, a psychologist Xavier has sent to Muir Island (specifically, we'll see, to help treat the Acolyte Spoor) and the man who will become Ahab, the master of the hounds from Rachel's future (as seen in "Days of Future Present"). Technically, the Ahab we know is from an alternate timeline, but most of Rory's time as a supporting character in this series will tease him becoming Ahab along with his efforts to escape that fate, before he ultimately gets merged with his future self and ends up looking more or less like the Ahab we know and serving for a time as one of Apocalypse's Horsemen. 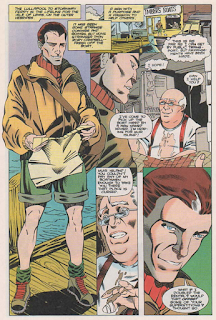 The Gamesmaster is contacted by an unseen individual (who will turn out to be Mr. Sinister, because it's 1993) to acquire Moira's records of Proteus' DNA, and turns it into part of the Upstarts competition by promising Sienna Blaze points for killing Moira. 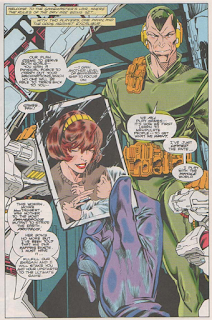 This issue introduces the Proteus Room, Moira's version of the Danger Room that uses VR technology (because it's 1993) in place of the Shi'ar holographic technology. I honestly don't think it ever gets brought up again (I mean, Excalibur will be seen training on Muir Island in the future, but I don't think anyone ever says, "let's go have a Proteus Room sessions!" or anything like that). 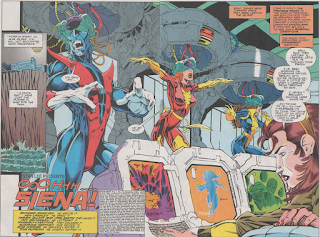 A Work in Progress
Moira notes that until Excalibur moved in, the only company she had were members of the research team that came and went, which explains who all the random scientists that appear and disappear on Muir Island as needed are.

Even before he makes his first appearance, Rory is involved in a mystery, as Moira notes that he seems familiar to him.

Siena's failure to execute Storm, Cyclops & Xavier in her first appearance is referenced. 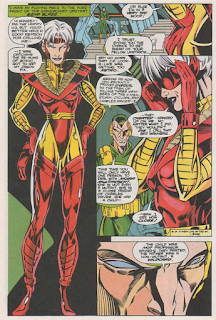 Rachel is back in her usual red-and-gold Phoenix costume, suggesting the blue-and-yellow version she wore in the final page of the previous issue was a coloring error.

Nightcrawler referes to Kitty as "Katy", something no one has ever done before, ever.

Siena Blaze is capable of detecting Nightcrawler's movement through the EM spectrum when teleporting, which is a cool pseudo-science use of her ridiculous power. 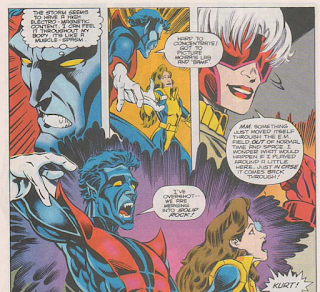 Richard Ashofrd on writing Excalibur after Alan Davis
"Basically, I feel that a lot of the wackiness was so distinctive to Alan [Davis} that I don't feel I should go and mimic that. The way he appraoched the book was his visions, stle, whatever you'd like to call it. I plan to focus very much on the character and how they interact with each other and with the other X-Men."

Austin's Analysis
While integrating Excalibur more fully into the X-books isn't an inherently bad idea, and doing so by making the team an auxiliary of Moira MacTaggert's work is a clever way of doing it, it's something of a shame that right out of the gate of their new direction they get saddled with the Upstarts plotline. At this point we're only a few months removed from being done with that storyline entirely, and if the goal with the new direction of this series was to make the book feel more essential, starting it off by featuring one of the franchise's least-essential storylines maybe wasn't the best way to go about that. That aside, this mostly works as the first installment in a new direction. "The Proteus Room" seems like a wonky idea and Ashford's scripting is a little wooden in places, but otherwise, this is pretty standard "settling in" material, with the attack on the oil rig an effective way to showcase the team's powers to anyone picking up the series for the first time now that it's more directly involved with the X-books.