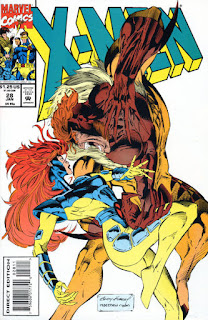 In a Nutshell
The X-Men deal with the presence of Sabretooth in their midst.

Plot
Jubilee wakes up from a nightmare of being hunted by Sabretooth, prompting Jean Grey to call an emergency meeting between herself, Cyclops, Storm & Beast to discuss Professor Xavier's recent decision to bring Sabretooth into the mansion. Meanwhile, Xavier runs some tests on the Legacy Virus-infected Revanche, then learns that Sabretooth is resisting psychic treatments from Psylocke, demanding instead that Jean perform them. Rogue & Gambit bring Sabretooth his dinner, and Sabretooth taunts Rogue with mysterious references to Gambit's past. Later, Scott & Jean present their objections to Xavier, but he insists that Sabretooth will stay. Determined to confront him once and for all, Jean enters his cell, ostensibly to give him the psychic treatment he's demanding. But she refuses, telling him he needs to deal with what he's done and not run away from his issues, winning his respect. The next morning, a nervous Jubilee, needing to confront her own fears about Sabretooth, brings him his breakfast.

Firsts and Other Notables
This issue deals with the fallout to Xavier's decision in X-Men Unlimited #3 to bring Sabretooth into the mansion for psychic treatment, as the X-Men adjust to his presence and debate whether Xavier is doing the right thing, especially in light of his recent actions (like asking Storm to steal from the government in Uncanny #305 and wiping Magneto's mind in issue #25).

It also marks the debut of what will be Sabretooth's unofficial look during his stay in the mansion: brown pants and a black tank top. Add in his silver manacles and muzzle, and you've pretty much got the "Prisoner Sabretooth" action figure.

When Rogue & Gambit feed Sabretooth, he continues to taunt Gambit about their past together, telling Rogue to ask Gambit about Paris. Unlike previous "mysterious hints about Gambit's past" this one is presumably being made with the story it's teasing already in mind; Nicieza will reveal at least one of Gambit & Sabretooth's previous meeting in issue #33, and it's the one Sabretooth is referencing here. 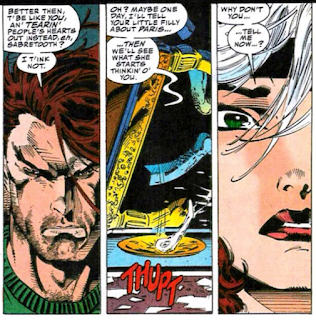 Sabretooth also tells Rogue to ask Mystique about her long-lost brother, a reference to the revelation from Sabretooth's miniseries that he and Mystique are the parents of Graydon Creed, and a setup for X-Men Unlimited #4 (in which Rogue will learn about TWO long-lost brothers). 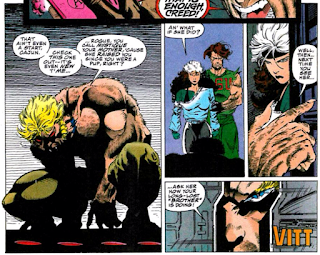 Psylocke attempts to give Sabretooth his psychic treatment (aka the "glow" he used to get from Birdie to calm his psychotic urges and help him think straight) but he refuses, saying she's not good enough. Here, it's presented merely as a pretext to get Jean into the room with Sabretooth (and win his begrudging respect), but it's interesting to think of that scene in the context of Sabretooth & Psylocke's history together (she held her own against him pre-ninja transformation and before she'd even officially joined the X-Men, in Uncanny #213), as well as their future (he will ultimately seriously injure her on his way out of the mansion, leading to the terrible Crimson Dawn nonsense that will eventually drag the character into irrelevance for a time).

Cyclops references what he and Jean recently went through with Cable, a reference to the events of Cable #6-8. 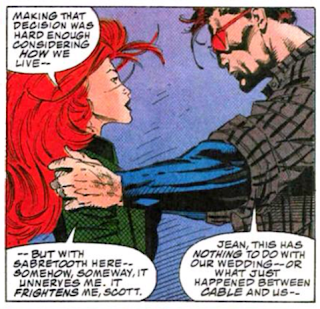 Sabretooth says that he is the flip side of a coin with Wolverine, an idea that will be somewhat causally explored during his stay at the mansion (at least initially), as the writers play around with the idea of Sabretooth as a Wolverine replacement.

A Work in Progress
The "senior" X-Men meet at Harry's Hideaway to discuss Sabretooth, with Nicieza joining Lobdell to sell the idea that Harry's was a place the X-Men had been going to for years despite it not appearing until New Mutants. 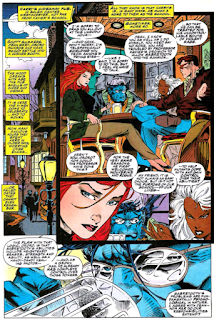 The debate held there is well-written, with both sides making some decent arguments (which basically boil down to "this isn't that different than taking in Wolverine or Rogue" vs. "yeah, but it's Sabretooth"). Also, Jean notes that she's using her telepathy to mask Beast's furry form, presumably to protect the notion that the X-Men hang out at Harry's rather than to protect Beast's identity.

Xavier, despite not budging on the whole Sabretooth thing, is still happy that his students are willing to call out "the old man".

While arguing with Xavier about keeping Sabretooth in the mansion, Cyclops & Jean point out that Xavier wasn't in the Morlock Tunnels for "Mutant Massacre", when Sabretooth & the Marauders mercilessly slaughtered one mutant after another. It's always appreciated when we're reminded that Xavier missed a good chunk of X-history, including some of their biggest losses.

Xavier provides a pseudo-science explanation for why the Legacy Virus causes blisters (in some people). Apparently, Beast has also created a balm to help with the pain they cause ("Blisters & Balm" is my new band name). 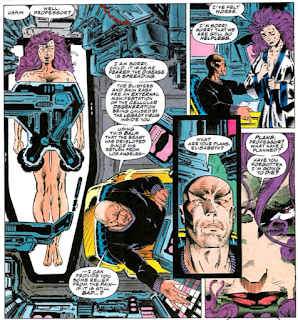 Austin's Analysis
As with #26, this is another example of an issue which would be incredibly jarring for anyone picking it up without reading other specific X-books. Most of Sabretooth's recent development, including the notion that he has theoretically-curable homicidal urges and his admittance to the X-Mansion for treatment, happened outside of any of the regular monthly X-books (if someone wasn't reading Wolverine, the Sabretooth limited series or X-Men Unlimited #3, the last time they saw the character in an X-book was issue #7; now he's suddenly living in the mansion). Nicieza does his best to spell out the circumstances of Sabretooth's presence in this issue, but I imagine it still had to be abrupt for certain readers.

That said, this issue does a decent job of exploring the impact on various characters of having Sabretooth living inside the school, even as a prisoner. Tying Jean's dismay at Sabretooth's presence to her feelings for Wolverine doesn't really work (it feels forced, but then again, I've never been that big a fan of the "Jean pines for Wolverine too" retcon), but the grudging respect she wins from Sabretooth by standing up to him is an effective moment. Jubilee's terror at living under the same roof as Sabretooth, as well as her efforts to overcome that fear, are well-depicted too, as is the senior X-Men's discussion of Xavier's decision and the confrontation between Cyclops, Jean and Xavier that results from that. Ill-advised and/or out-of-left field the decision to try to rehabilitate Sabretooth may be, this issue effectively shows the impact of that decision on at least a few of the X-Men.