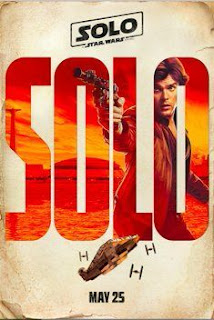 Of all the various films Disney has released and/or announced since its acquisition of Star Wars, the one that I've been the least excited about has been Solo. For the most part, this is because I've never been a terribly big Han Solo guy (unlike, apparently, all other Star Wars fans); I like him fine as part of a group of character (ie one of the original trinity) or as a mentor to Luke/Rey/Finn, a foil/romantic partner for Leia, etc. But he does little for me on his own/as the central character of a story (I haven't read the original Han Solo novels, which I understand to be excellent, but the best stuff of the AC Crispin Han Solo trilogy in the old Expanded Universe was the stuff surrounding Han, filling in historical events leading up to his momentous drink in the Mos Eisley cantina). I've also been ambivalent about this film because I really want to see Disney use one of this standalone movies to tell a story that doesn't take place between episodes three and four (bear in mind, if the long-rumored Kenobi solo film starring Ewan MacGregor does materialize, this particular objection of mine will fade quickly).

All of that said, one of the other things I really want to see from these standalone films is Star Wars takes on different types/genres of films, and Solo offers a decent opportunity for that. Rogue One was supposed to be a heist film but wasn't really (maybe in one of its original versions or in the reams of footage left on the cutting room floor, it was), and instead is kind-of-sort-of a war film (at least in its third - and best - act). Some of the Solo footage from both the first official trailer and the Super Bowl tease (as well as the first batch of character-specific posters) suggest some Western overtones to the film (suitable, given the character's thematic origins as the classic gunslinger archetype) as well as some of same heist film material Rogue One teased but ultimately dropped. If the end result of Solo is a Star Wars take on a Western heist movie, with big stakes for the characters but not necessarily for the galaxy, than my ambivalence will have looked foolish in retrospect.

But for now, all we have are trailer images. Here's some thoughts on stuff that stood out from the first batch.

"Kicked out of the flight academy..."

Old EU lore states that a young Han Solo joined the Imperial Academy in order to become a pilot, then got kicked out when he rescued an enslaved Chewbacca (leading to Chewbacca's life debt to Han), but its unclear how much of that remains canon. The life debt certainly is, though we have yet to be given an explanation as to what triggered it, and this trailer seems to suggest that at the very least, Han's past as an Imperial cadet remains part of it as well (to be clear, I'm 99% sure the Super Bowl footage of Han being interviewed by an Imperial recruiter is not footage of him getting into the academy for the first time, but rather part of whatever plot the motley crew Han has allied himself with is up to. But the "kicked out of the flight academy" line suggests that event happened in his past, even if the film doesn't dramatize it). 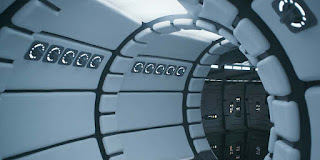 I love the look of the shiny pre-Han Falcon, not because it indicates a passage of time (there's not really enough time for time to pass sufficiently that the Falcon would become that rundown) but because it indicates the shifting priorities of the ship's owners. Of course the Falcon under Lando is going to be spiffed up and polished, whereas once Han gets a hold of it, he's going to care more about making sure the guts are top-of-the-line than polishing the corridors and whatnot.

There's a couple iconic Western-style shots in the trailer (the speeding train is another example), but none moreso than the closeup of Han's iconic blaster, presumably in some kind of a duel, geting unstrapping from its holster.

Between the crashed one on Jakku in Force Awakens and the fleet being dwarfed by the Death Star in Rogue One, the Disney Star Wars trailers are very good at presenting strong, compelling shots of Star Destroyers. This trailer is no exception, with the shot of a Star Destroyer inside some kind of stellar gas/nebula (possibly even the area of space that makes the Kessel Run so tricky), illuminated by brief bursts of lightning, joining the ranks.

Far, far moreso than Han Solo, the thing I am most excited about this film is seeing a young Lando Calrissan (to the point where, like many others have suggested online, I kinda wish this was a solo Lando movie), and the trailer didn't disappoint in that regard. From his badass fur coat, to his smirk, to whatever little hand gesture call-and-response he does with his co-pilot droid in that one shot, Lando continues to look like the coolest kid in town, and his presence, more than anything, is buoying much of my excitement for the movie. 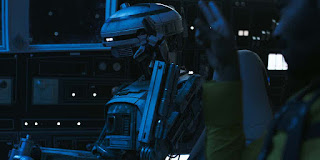 PS regular "Force in Focus" reviews of Marvel's Star Wars comic series will return soon, I promise. I want to get a backlog of posts built up to more easily ride out scheduling complications before starting them back up again, but as anyone reading my "X-aminations" posts knows, I've been struggling to keep my head above water there as well. So it's been slow going. But they will return, I promise!
Newer Post Older Post Home
Posted by Austin Gorton at 12:00 PM