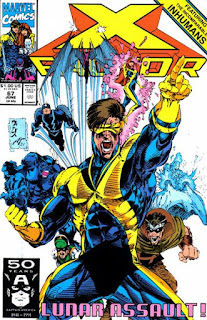 In a Nutshell
X-Factor teams up with the Inhumans against Apocalypse.

Plot
X-Factor is pulled from the wreckage of Ship by a passing vehicle, which belongs to the Inhumans. Inside, they learn that Apocalypse has attacked the Inhumans' home on the Blue Area of the moon, capturing many and transforming them into his own army. In the future, Askani is transported back in time one again, given one last shot to save Nathan Christopher from Apocalypse. On the moon, X-Factor and the Inhumans are attacked tauntingly by the Riders of the Storm as they plot their attack on Apocalypse, while Apocalypse tends to Nathan Christopher. Just then, X-Factor and the Inhumans attack his citadel, using a combination of holographic illusions and real people to create a distracting frontal assault while another group attacks from the rear, freeing Apocalypse's captives and turning them loose against him. 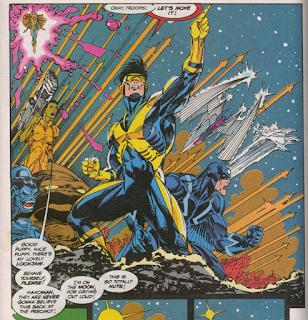 Telling the Inhumans to look after Charlotte Jones as they continue to fight Apocalypse's forces, X-Factor journeys deeper into his citadel, searching for Nathan Christopher. Between the light defense they encounter and Ship's sudden ability to locate the boy, Cyclops suspects a trap, but proceeds ahead anyways, soon encountering a gloating Apocalypse alongside Nathan Christopher. But Apocalypse says Cyclops isn't the only capable of deception, and he fades away, revealing a much larger Apocalypse behind him, one who declares that it is time for all of them to die. Meanwhile, back on Earth, Sebastian Shaw learns that his various companies have all gone bankrupt, a move orchestrated by his son, Shinobi, who proceeds to kill him.

Firsts and Other Notables
In a bit that has nothing to do with X-Factor, the closing few pages of this issue detail the death of Sebastian Shaw, one time Black King of the Hellfire Club, at the hands of his son, Shinobi. Appearing for the first time, Shinobi has the mutant ability to alter his molecular density (like the Avenger's Vision), and in this case, he uses this ability to reach into his father's chest and trigger a heart attack (Shinobi jokes that since his power is so much like Harry Leland's, maybe Sebastian isn't his real father, though his comment still stands as joke). Shaw's death actually sticks for a few years, but, not surprisingly, he does eventually come back (my thanks to UncannyX-Men.net for the image below, as my scan of the issue doesn't include the closing Shaw pages for some unknown reason). 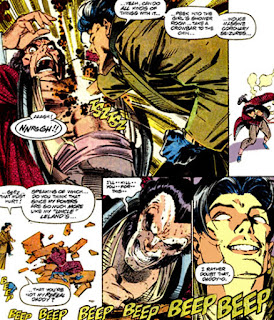 The introduction of Shinobi and slaying of Sebastian is all part of Lee and Portacio's planned Upstarts storyline, hinted at previously during the present day events of X-Men #268 (here, Shaw refers to his son directly as an upstart, lowercase "u", but the term is clearly loaded), a storyline intended to sweep away some older villains in an effort to puff up the creators' new ones, which begins in earnest here. Of course, the Image Exodus will occur before Lee and Portacio do much more than kill off a bunch of established villains and make vague hints about the motives of their new ones, leaving later creators to ultimately wrap-up the storyline, but the Upstarts will be a running thread throughout much of the early post-relaunch issues of the X-Men books.

Ship is revealed to have survived (his personality programming, at least; his physical form is gone) in limited form, still able to converse with X-Factor and, later, project holographic simulacrums. 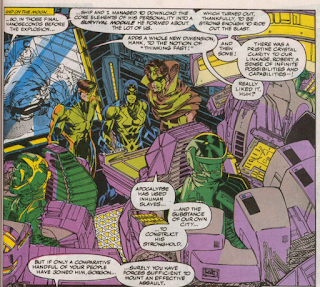 This issue reveals that Askani hails from the future, one which is under siege by Apocalypse, setting up Cable's later destiny as the Chosen One intended to ultimately defeat him. Askani also mentions that time traveling is a family trait, which really seem like a nod at Rachel Summers. 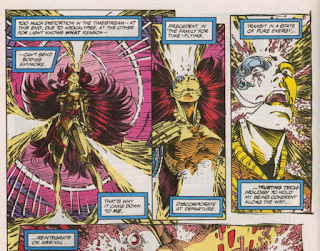 Boak, a futuristic android seen here advising Askani, appears for the first time in this issue. He'll pop up again in the early issues of Cable's solo series as a member of Cable's future era strike force, and even made a brief appearance in the X-Men animated series.

This issue reveals that the Riders of the Storm/Dark Riders are former Inhumans, captured and transformed by Apocalypse, though little is made of this in their future appearances.

A Work in Progress
In addition to the Riders of the Storm, Apocalypse is also turning captive Inhumans into an "army of conquest".

Apocalypse says that Nathan's destruction is key to his ultimate victory. 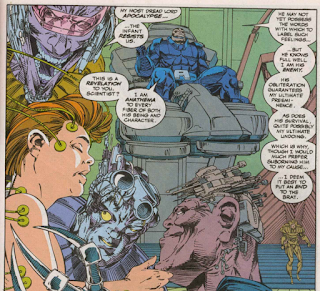 Cyclops zings the New Mutants at one point during the fight against Apocalypse's forces. 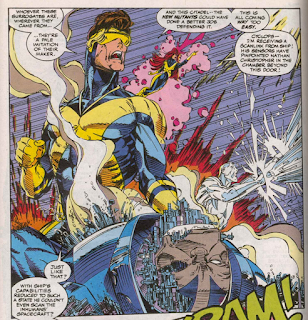 Like a Phoenix, From the Ashes
As the battle against Apocalypse takes place on the Blue Area of the Moon, Claremont gets one last chance to reference the death of Phoenix. It's even pointed out that of all the members of X-Factor, Iceman was the only one who wasn't there, in some form, originally. 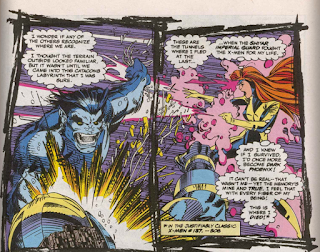 Finding that his wings seem to know the layout of the place instinctively, Archangel wonders if one of Apocalypse's weapons could have been the agent of Phoenix's death (though I don't believe this idea ever goes anywhere). 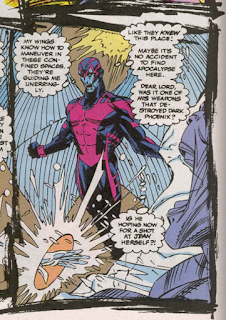 Teebore's Take
If any chapter of his story can be accused of unnecessarily padding it out, it's this one, with the introduction of the Inhumans seeming to do little more than push the conclusion to a fourth issue. But they do help the surprisingly-insular series feel a little less so, more a part of the Marvel Universe as a whole (the previous issues' hero cameos had a similar effect, and both are elements in the success of this story), and the change of scenery, from the Earth-bound Ship to the Blue Area of the moon,  expands the scope of the story while also providing Claremont, now essentially on the eve of his departure from the X-books, one last chance to riff against arguably his most successful and acclaimed story, however briefly. Combined with that is the introduction of Apocalypse, after two issues scheming behind the scenes, onto the stage, first in the form of holographic & robotic duplicates and then in his final, massive, form, which gives the story the necessary push it needs going into the climax, a sort of "end-of-the-game boss" fight with the fate of Nathan Christopher on the line. There may be some padding here, but for the most part, the structure of the story is holding up remarkably well.