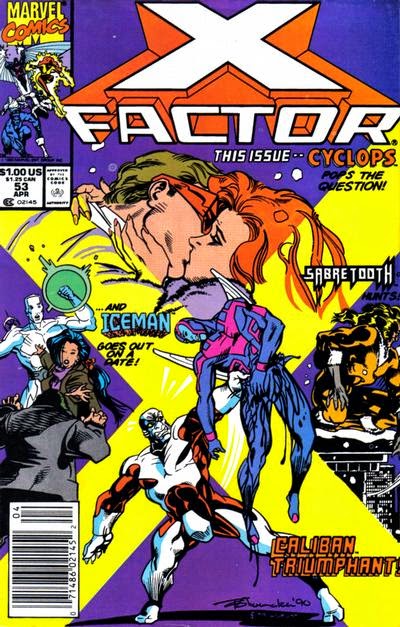 In a Nutshell
Scott proposes to Jean.

Plot
Caliban comes across Archangel, badly wounded by Sabretooth,. Thinking Caliban is Sabretooth, Archangel attacks, and Caliban is pleased, as he hopes to best Apocalypse's earlier creation. Meanwhile, Scott and Jean go on a romantic walk through Central Park, while Bobby tries to take Opal to a great restaurant he knows, while they are unknowingly being followed by Mole. However, it turns out the restaurant has closed, so Opal invites Bobby back to her apartment for leftover pizza. On the way, they run into Officer Jones, who warn them about the grisly murder she discovered not far away. Nearby, Caliban and Archangel's battle continues, with Archangel slashing Caliban's face. In Central Park, Scott proposes to Jean. In Soho, Bobby and Opal near her apartment, but Christopher's stroller suddenly detects Mole. 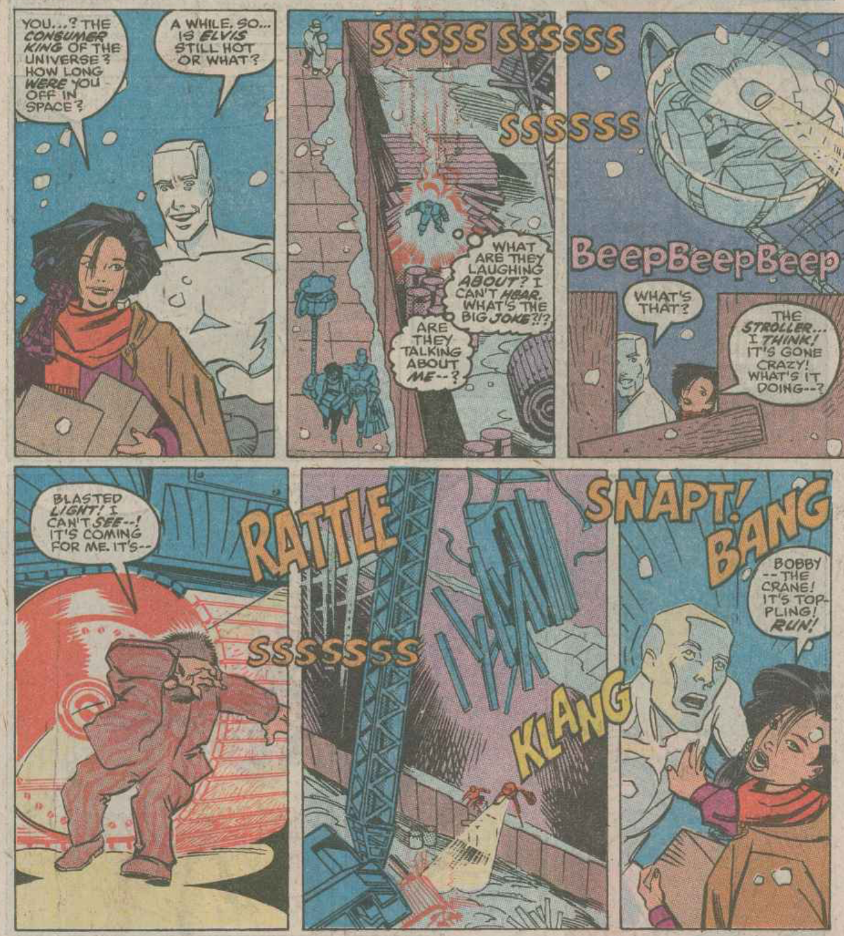 Spooked, he accidentally causes a crane to drop its load of girders, but Bobby is able protect Opal and capture Mole. Elsewhere, Caliban and Archangel's fight spills onto the streets, attracting the attention of Officer Jones and her partner, who intervene and drive off Caliban. In Soho, Opal tells Bobby that Mole is harmless, and he apologizes, telling Opal he was trying to protect her, as the trio is watched by Sabretooth. Meanwhile, Jean turns down Scott's proposal, telling him that with Madelyne and Phoenix's memories in her head, she can't be sure of her feelings for him. In Soho, Mole insists on returning to the sewers over Opal's objections, not wanting to watch her and Bobby together. Opal hugs him goodbye, and Mole drops into the tunnel, where Sabretooth is waiting for him.

Firsts and Other Notables
This issue is notable for Scott proposing to Jean for the first time. Technically, he's done it twice before, to her cosmic clone in X-Men #136 and to her genetic clone in X-Men #174, but this is the first time Jean herself experiences being popped the question. She turns him down, basically saying her memories are too jumbled for her to make a clear decision and be confidant it's her decision, though she insists she does still love him. As a major Scott/Jean shipper when I was younger, I was always bothered by her refusal (though it helped that they eventually did get married), though I came to recognize it as the right decision for the character. 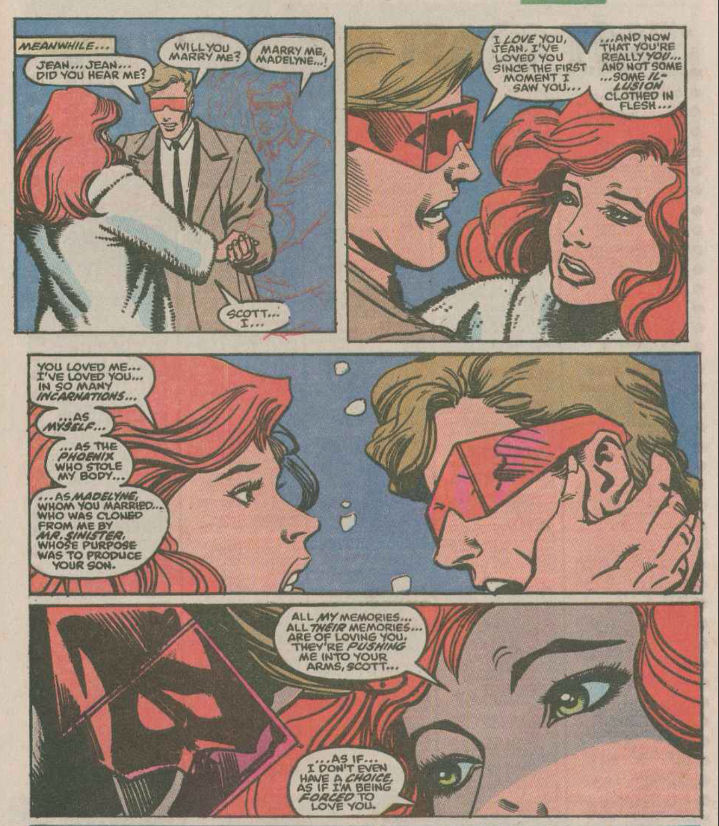 Though they don't exactly break-up after Jean turns down Scott, this does kick off a period where their relationship is a little more nebulous and up in the air (including Jean taking a sabbatical from the team, during which she'll guest star in X-Men), where sometimes it seems like they're still X-Factor's power couple and other times where maybe they're not.

Mole makes his last appearance (ever, as far as I know), as he says goodbye to Opal and returns to the Morlock Tunnels, only to find Sabretooth waiting to kill him. It's actually a surprisingly-grim ending for a relatively innocent character. 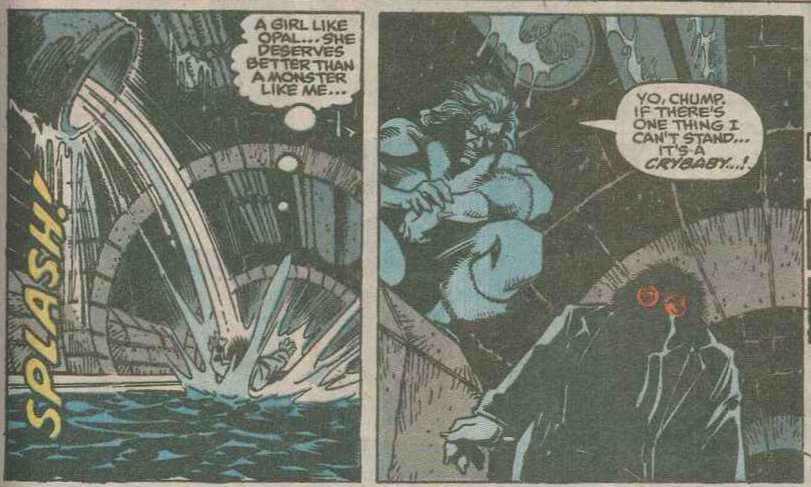 This is another one of those classic "here's a montage of all the various things going on inside!" covers, with each piece loosely divided by the large X.

A Work in Progress
Jean is experiencing both Maddie's and Phoenix's memories, usually (poorly) depicted as pink, barely readable images of past events superimposed over panels set in the present. 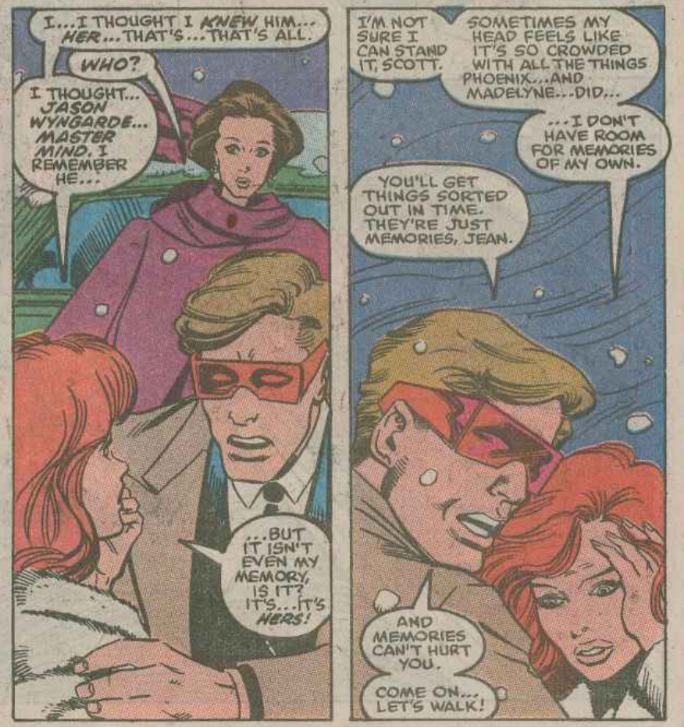 Having gone directly from his shopping spree to going on a date with Opal, Iceman is still totting around baby Christopher in his futuristic stroller, which seems a poor choice for both a date and as a babysitter. He's also, somewhat comically, just wearing his X-Factor uniform under his coat. 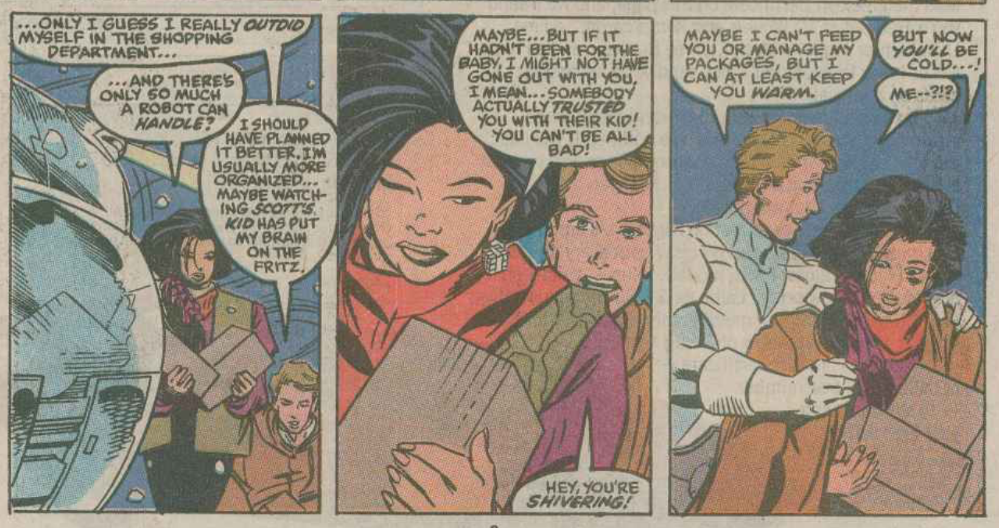 We find out Opal and Charlotte Jones know one another. The Grim 'n' Gritty 90s
Jean warns Scott of muggers in Central Park, as New York was still cleaning up its 80s-era act.

Iceman also laments the fact that Nintendo went out of style while he was in space, though I'm not sure what system, in early 1990, was considered the trendy one. That's still a bit before the Genesis and Super Nintendo, I believe.

The Awesome and Terrible Power of Cyclops Archangel
Archangel declares that Caliban is what he would be, if he were to give in to the desires of his wings. 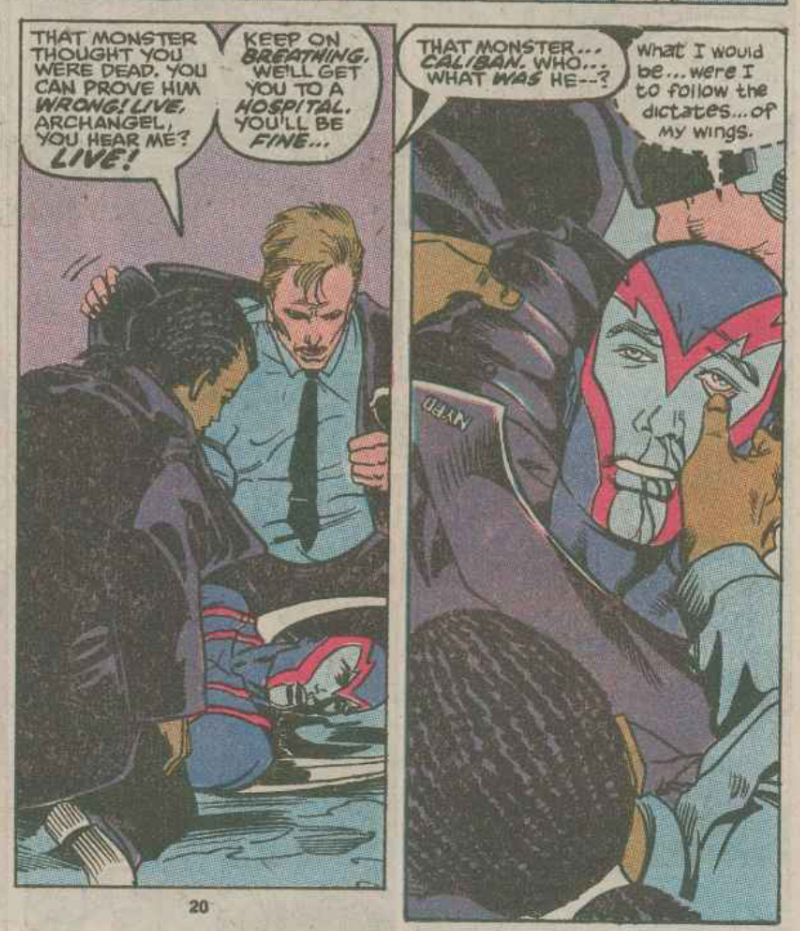 Like a Phoenix, From the Ashes
Amongst other recollections, Jean flashes back to the famous butte scene from X-Men #132 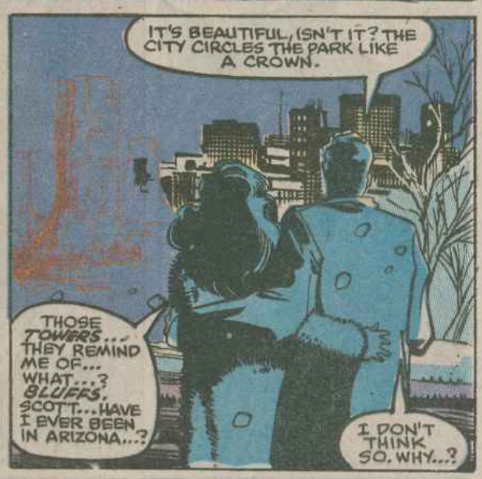 Teebore's Take
Continuing on directly from the previous issue, this one is structurally almost the same: an increasingly-beat up Archangel battles someone, giving the story it's spine, while the rest of X-Factor is involved with romantic shenanigans. The end result, particularly the Archangel fight scenes, feels a bit repetitive, but one particular event sets this issue apart: Scott's proposal to Jean. It's technically the first time he's proposed to her, and it's one of those things that seems like a natural progression of their relationship (since, you know, he's already proposed to two other versions of her...).

While Jean turning him down could smack of the ever-present need for superhero comics to change, but not change too much, it makes sense in context: Jean's mind is a mess, thanks to the memories of Maddie and Phoenix rumbling around in there, and she has no way of knowing, should she say yes, who exactly is saying it. The effect of the the pink echoes depicting Jean's other memories as Scott proposes to her is executed very poorly, almost to the point of being unreadable, but the idea of it is brilliant, as it creates a sense for the reader of just what Jean is experiencing. As a result, her turning down Scott reads more like a reasonable character choice than one made by the creators out of fear of changing the status quo too much, and whether accurate or not, that's an illusion worth creating.

Next Issue
Next week: Wolverine teams up with Spider-Man in Marvel Comics Presents #48-50, the Cross-Time Caper resumes in Excalibur #21, and Wolverine's South American adventure comes to a close in Wolverine #23.