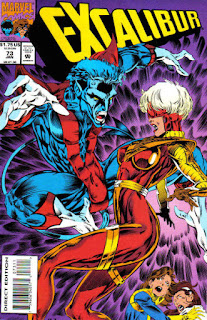 "Memories Are Made of This"
January 1994

Plot
Shadowcat manages to phase Nightcrawler free of the rock into which he teleported, while Phoenix works to repair the electro-magnetic damage wrought by Siena Blaze's power. Elsewhere, Rory Campbell washes up on Muir Island's shore, his ship having been damaged by Blaze's blast. Inside, Blaze locates the disc containing Proteus' DNA information. But Nightcrawler & Shadowcat manage to get the disc away from her while Phoenix confronts her directly, and is able to match Blaze's power enough to send Blaze teleporting away. Phoenix then alerts her teammates to the presence of Rory Campbell, and Nightcrawler helps bring him to safety. Later, Shadowcat contacts Xavier to tell him about Blaze's attack, then puts in a call to Braddock Manor to check on Meggan, only to find her in a feral, beast-like state.

Firsts and Other Notables
Meggan makes a brief appearance at the end of this issue, as Kitty calls Braddock Manor to check on her, only to discover her in an animalistic form. It seems strange that she'd be calling, considering the last we saw of Meggan she was sitting catatonic next to a waterfall on the mansion grounds, but whatever, I'm happy to see her back (and this marks her return to the series, as she'll get reintegrated into the cast and stick around pretty much to the end of the series from here on out). 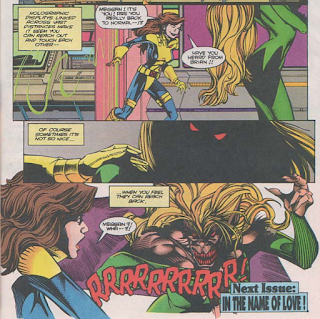 Moira mentions that shortly after her son's death, she created a clone of him, before ultimately destroying, a reference to a Classic X-Men backup story (which don't get referenced all that often). 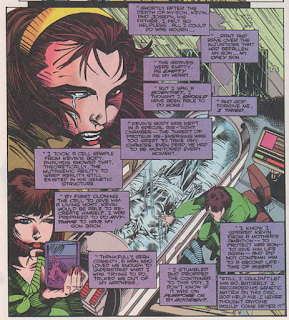 A Work in Progress
Rachel once again briefly manifests Captain Britain arms, as in issue #71. 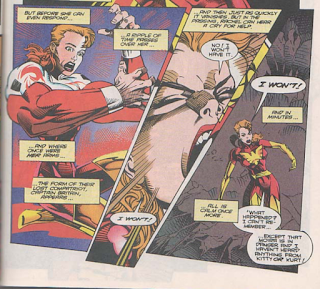 Forge built an unmanned rescue vehicle for Moira at some point. 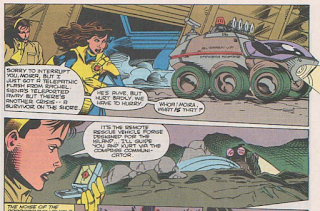 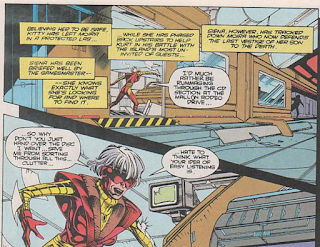 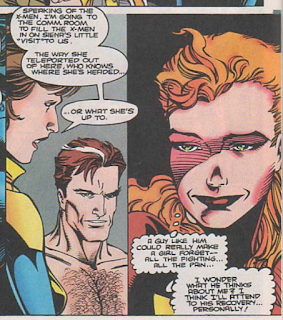 Austin's Analysis
Much as I lamented last issue on behalf of this series finally getting integrated into the larger X-universe only to be given one of said universe's lame-duck storylines right out of the gate, this issue nevertheless features probably the best possible use of Siena Blaze simply by having Phoenix as part of the cast. The biggest problem with Blaze (aside from her bland-yet-obnoxious characterization and affiliation with the meandering Upstarts) is that her power is so extremely powerful and the side effects so threatening to the entire planet, it becomes hard to write her into a story where she uses her power more than once at most. But in Phoenix, she has in an opponent arguably the one character powerful enough to go toe-to-toe with her and allow her to use her power like a regular villain would, because Phoenix is powerful enough to repair/contain the catastrophic effects of her power usage. All that said, "not a terrible use of Siena Blaze" is damning with faint praise and doesn't exactly make this a great issue of Excalibur or a terribly compelling read, but it does at least somewhat repudiate the decision to make her the first villain of the series' new direction.

Next Issue
Next week: Gambit goes to the Big Easy in Gambit #1-4 and Cable learns some stuff in Cable #7.
Newer Post Older Post Home
Posted by Austin Gorton at 12:00 PM