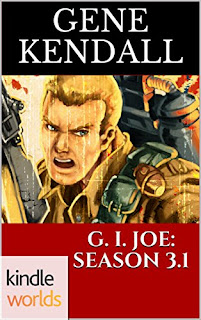 Gene Kendall here, shamelessly appropriating a blog post to talk about my Kindle Worlds project.  G. I. Joe: Season 3.1 is my attempt to continue the animated adventures of America’s highly trained special missions force, presented today in a digital file.  The origins of this story can be traced back over three decades ago to the aching sense of disappointment I experienced following G. I. Joe: The Movie.  No, not dissatisfaction in the movie itself…disappointment that no new episodes of G. I. Joe followed!

Any kid watching G. I. Joe knew the score.  A winding, multi-part story would introduce a series of new characters, battles would ensue across the globe, Cobra would ultimately face their defeat, and the following Monday…new episodes of G. I. Joe!  Airing as a weekend afternoon presentation, G. I. Joe: The Movie altered the formula somewhat, piecing together all of the chapters into one massive story, one with noticeably improved animation and guest actors your parents recognized.  Still, it was clearly the big G. I. Joe event of the year, and we had every reason to believe the adventures of Falcon, Jinx, Tunnel Rat and the rest would be forthcoming.
Until they weren’t. 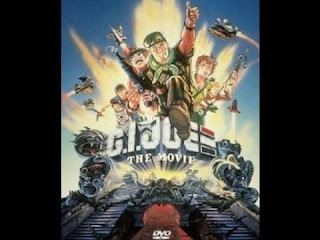 Plans were in place, but based on my understanding, Hasbro just didn’t want to pay Sunbow to produce new episodes of the series.  G. I. Joe was still doing well in syndication, keeping the brand alive five days a week, and apparently someone with a calculator did the math and decided the benefits of keeping reruns on the air outweighed the cost of publicizing new lines of toys with additional episodes.
Fans could still glimpse the new characters in brief commercials for the toys, in addition to the fully animated spots created to promote the Marvel comic.  (Backdoor toy commercials skirting FCC regulations on fully animated toy ads.)  And, I know, G. I. Joe did return years later with budget animation house DiC, but that (intentional) joke of a series was as big a disappointment to my kid self as the Nintendo X-Men game.  We’re not speaking of it.
Larry Hama introduced the new characters with the kind of enthusiasm most of the post-1985 Joes received in the comic -- he’d work them in when he could, but rarely saw fit to make them stars of the series.  And new menace Cobra-La, as Hama famously informed one fan in the letter column, was where he finally drew the line with Hasbro, banning them from the comic. 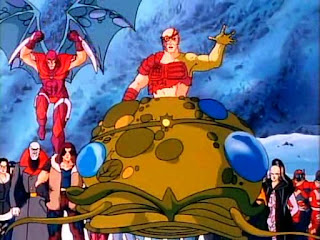 It’s possible that firm dismissal is one reason why so many Joe fans hate the animated movie.  The idea of a pre-human ruling class, the true Cobra elites, plotting from the Himalayas clearly has no business in the more grounded world of Hama’s series.  (This is the reality where Cobra Commander funded his organization by traveling town to town, selling pyramid schemes.)  Having the writer of the beloved G. I. Joe comic get a little salty with the brand owners in the letter column was honestly surprising, and I bet that one-paragraph response stuck with many fans over the ensuing years.
For Sunbow’s G. I. Joe, however, Cobra-La made about as much sense as any other Cobra scheme in the past.  Over a third of Cobra’s plots involved science fiction or fantasy elements, the writers embracing the mixed-up nature of G. I. Joe’s reality.  Spy fiction, supernatural threats, classic monster hunting, and military action all melded as one in the Sunbow series.  Ancient societies of crab people aren’t really pushing the boundaries any more than a weather dominating machine or an appearance by the actual sword of Excalibur.
(If you do hate Cobra-La, though, I get where you’re coming from.  Don’t worry -- they’re nowhere near my story; not even mentioned by name!) 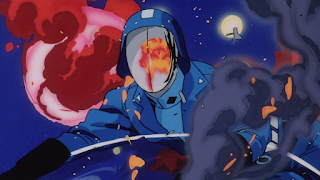 So, my starting place when writing a G. I. Joe piece was to give adult-me what kid-me could never have.  A new episode of G. I. Joe, set right after the movie.  This means obeying a few internal rules.  Not glossing over the ending, which left Cobra in a diminished state, for one.  Not contradicting previous episodes of the series (although I recognize continuity wasn’t a major priority for the producers) is another.  No appearances from characters or concepts not created by 1987, regardless of how much I personally enjoy them or how easy they could’ve worked within the story.  (Since a few concepts would sometimes appear early in the cartoon, I did give myself some leeway on the 1988 line, but I don’t think any actually made the cut.)  Finally, if we’re being honest about what G. I. Joe in 1987 would’ve been, that means a healthy part for Lt. Falcon, the slacker-turned-lead who was going to take over the aborted Season Three.
Does this mean I wrote Lt. Falcon with Don Johnson’s voice in mind?  You bet your friggin’ life I did, pal.  (See, that’s supposed to be in Don’s voice.)  All of the characters “speak” with the Sunbow-era voice actors in mind. 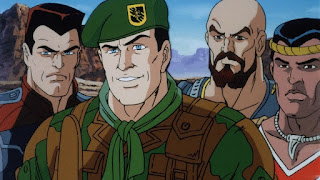 A few issues, though.  I’m not a kid; the same fiction that entertained me at seven isn’t going to hit me the same way today.  (Plus, the odds of a seven-year-old downloading a prose G. I. Joe novel seem pretty slim, don’t they?)  And prose isn’t the same format as syndicated animation.  They’re not even close, and embracing the limitations of a different medium needlessly stifles storytelling.  Also, the Hasbro edict to almost exclusively feature this year’s line is a pointless creative hindrance today.  The 1987 cast is there, but they’re joined by favorites from the previous years as well.
The gag of picking up in 1987 and writing an ironic G. I. Joe episode might seem fun, but I have a feeling the joke would grow old soon.  And, as clever as the Sunbow series could be at times, I’ve never been one to associate G. I. Joe primarily with humor.  It’s an aspect of the stories, but not the driving force.
Melding my desire for more of this era of G. I. Joe with my adult interests as a writer, I attempted to create a novel that works as a novel, while also setting the events firmly in the animated world.  The comic is also there as inspiration, but it’s not allowed to supplant the show’s continuity.  Almost every chapter has a moment I tried to visualize as a Mike Zeck cover (try to find them), because that is the height of Joe’s visual identity, of course. 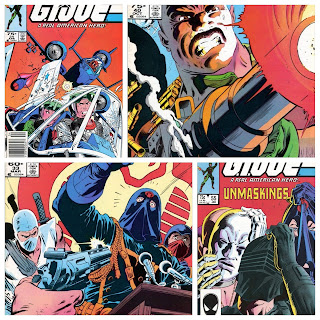 Essentially, every episode of the series is backstory, but the narrative isn’t bound by the restrictions of a 1980s cartoon.  (If you’re curious about the touchy issue of “guns vs. lasers,” I decided to stay vague on that one, aside from listing the actual specs of some of the vehicles.)  Nothing in the novel is profane, but the story does exist in an adult world, and hopefully, the motivations and conflicts amongst the cast will feel appropriately adult.
There’s some precedent within the series for this.  While many of the plots were outlandish, the show was also very honest about human pain (even the Christmas episode touches on what it’s like to feel lonely on the holidays), and would occasionally acknowledge real world issues, like the children of American G. I.s left behind in Southeast Asia.  Staying true to this era, I feel as if certain issues should be addressed, and a prose novel opens additional doors not available in animation.
Am I arrogant enough to believe this is what one of the animated series’ writers would’ve done with a prose novel?  Nope, but I think if this were published as a cheap paperback circa 1987, it’d be pretty entertaining.  G. I. Joe works best when finding a balance between earnestness and irony, so this became as much of a guide when writing as my imposed rules.  The story embraces some of the absurdity of the brand, but never dwells on it.
Whether or not I’ve succeeded is up to you.  If you’re willing to give it a shot, you can read the opening chapters for free and download the novel here.  Any support, in the form of reviews or posting links, is certainly appreciated.  If you’re a G. I. Joe fan, or just someone who’s enjoyed my writing in the past, I hope you have as much fun as I did. 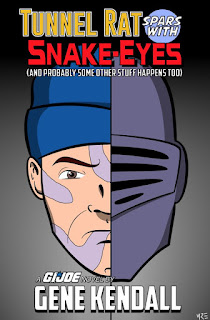 And, finally, here's a mock cover created by our pal Matt, based on a quick preview I posted on Twitter.  I would've asked him to do the actual cover, if Hasbro didn't require writers to use stock images.