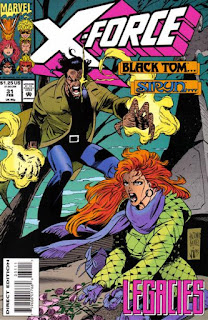 Plot
Warpath meets with Kelvin Doneghann, a reporter & childhood friend of Siryn's, to discuss Black Tom's attack on the Cassidy's family lawyer Flaherty, with Kelvin noting that if Black Tom had wanted to kill him, he could have, suggesting he's really after attention, specifically from Siryn, who is continuing to deal with her problems by drinking. Later, Kelvin meets with Juggernaut, who is worried because Black Tom needs medical treatment he can only get after turning himself in. The pair devise a way for Black Tom to turn himself in to the authorities and give Siryn some closure on their relationship, and with Warpath's help, arrange a meeting between the two. At the grave of Siryn's mother, whom Tom also loved, the two argue, with Siryn ultimately accepting how much of a father Tom was to her, while forcing Tom to accept that he is responsible for his own evil actions. As Siryn declares that she's giving up drinking, Tom allows himself to be arrested. Juggernaut, watching from the shadows, points out to Warpath that if Siryn truly stops drinking, she may not need him anymore. Warpath agrees, but says, that may be the price of friendship.

Firsts and Other Notables
As Siryn grapples with her alcoholism and relationship with Black Tom, this issue provides a chunk of backstory for both her and  Black Tom. First, we see how Tom & Banshee's rivalry developed, how both fell for the same woman, Maeve Rourke (previously mentioned before), how a tussle between them led to Tom needing to use the cane that would later channel his mutant energy blast, and how Tom came to raise Siryn when Maeve died after giving birth while Banshee was away with Interpol and Tom chose to keep Siryn a secret. 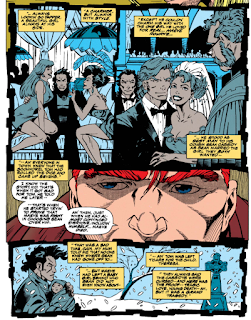 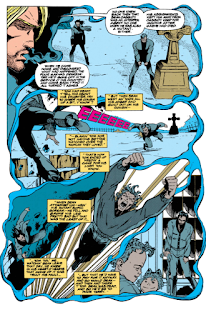 From Siryn's perspective, she tells Warpath about how Tom ultimately sent her to a Catholic boarding school, where she was introduced to alcohol and quickly came to use it to help her deal with her issues, including the feeling that Tom, whom she loved as a father, had abandoned her. 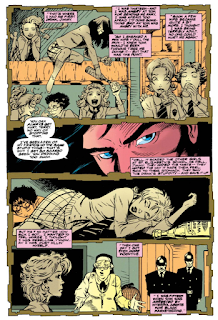 Tom, in turn, tells Siryn that he only sent her away to keep her away from his increasing criminal activities, which doesn't quite gel with Siryn's first appearance, in which she was working as a criminal associate of Tom & Juggernaut.

This issue marks the first time Siryn has seen her "uncle" since he was implanted with wood bits by Tolliver following his injuries in issue #4. 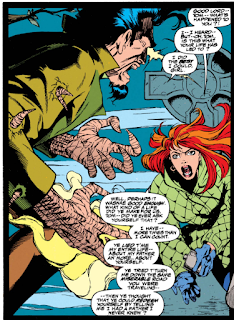 Siryn declares she is giving up drinking at the end of the issue, which is one of those pat "well, I've laid my issues to rest, so I guess I can just quit drinking now" kind of moments, though Siryn's alcoholism won't be entirely swept under the rug and will pop up again from time to time. Also, she apparently stocks her flask with some kind of purple booze... 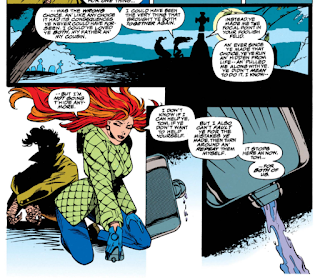 Though they still aren't quite a romantic couple at this point, Juggernaut points out to Warpath that she may lose interest in him now that he won't be cleaning up after her drunken binges, something Warpath, to his credit, seems okay with it, as it's the best thing for Siryn. 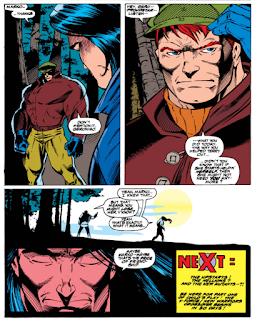 Speaking of Juggernaut, this issue is another example of him hanging out in a bar in civilian clothes, though it goes much better (for the bar, especially) than in Uncanny X-Men #183.

A Work in Progress
It's noted here that while Siryn refers to Black Tom as her "uncle", he is in fact her second cousin (as he and Banshee are first cousins, not brothers). 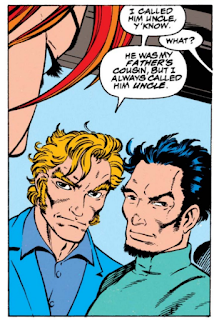 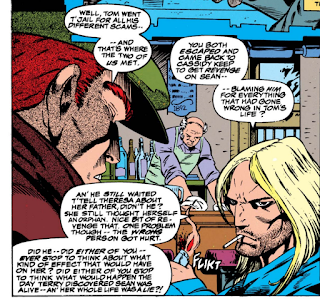 Juggernaut's involvement in this story stems (pun intended) from the fact that Black Tom's new wood implants are killing him (as a result of Juggernaut "rescuing" him from Tolliver's scientists too soon), and the only way he'll be able to get treatment is if he turns himself in to the authorities. As he, Warpath & Kelvin watch a plan to make that happen, Juggernaut points out that he can always just break Tom back out of jail whenever it's safe to, which is a nice touch.

The Grim 'n' Gritty 90s
Siryn's discussion of how alcohol became a crutch with her is careful to point out how vile & nasty the stuff is, in a very "PSA-y" kind of way that reads like Nicieza wanted to make sure to turn kids off the idea of drinking ("They hated the taste -- they hated the way it made them feel sick to their stomach. They saw the drink's stupidity -- and gave it up").

Also, Kelvin receives data on Tom from interpol via fax. 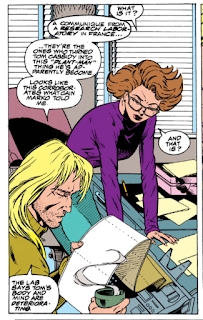 Austin's Analysis
This is a quiet, character-driven issue featuring just two regular cast members and no super-powered fights, focusing on alcoholism, the emotional weight of family, and the power of friendship; reading issue #1 of this series, it'd be impossible to imagine an issue like this ever occurring, which is a testament to the work Fabian Nicieza has done rehabilitating this title into, if not an all-time classic, a consistently readable series with engaging characters, capable of supporting stories that deliver more than just splash pages of action scenes featuring anatomically-bizarre figures. Even the art, which isn't perfect, is still somehow stronger and more polished than in previous issues, despite the lack of fight scenes (and a few questionable panels of characters talking to one another but posed like they're fighting each other).

Of course, making the Irish character in the book an alcoholic who learned to drink at Catholic school has always carried some strong whiffs of stereotyping, but it helps that Siryn being Irish has never been a terribly big part of her character up to this point (in part because "Siryn" as a codename is less inherently Irish than "Banshee", meaning readers aren't always immediately being reminded that she's Irish), and Nicieza grounds her behavior in her difficult family life: not just traditional father issues, but struggling with feelings of abandonment from both her biological father and the man who raised her, and then the difficulty of reconciling her genuine love for that man with the fact that he's inherently not a great guy.

Similarly, Warpath's involvement here is more than just a typical "pining for an unrequited love" scenario, as he finds himself valuing Siryn's well being more than the satisfaction he may get from being needed by her. Even her old boyfriend Kelvin, introduced in this story, is somewhat nuanced: at first, he seems like a rival for Siryn's affections, but ultimately turns out to be a sounding board for Warpath, while helping Siryn reconcile her issues with Black Tom, all without jumping in to try to and curry favor with her. It's smart and, in places, surprisingly subtle writing all around (Juggernaut is also excellent here, as he usually is whenever he's paired up with Black Tom). While this is perhaps not quite as good as some of the contemporaneous Lobdell Quiet Issues over in Uncanny, it's still quite an achievement, on its own merits, and especially because no would have ever have expected the words "smart & subtle" being used to describe X-Force some thirty issues ago.