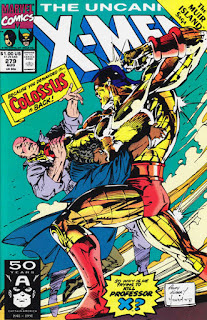 In a Nutshell
Professor X restore's Colossus' memories and frees him of the Shadow King's control.

Plot
As the Shadow King-enthralled Colossus clambers from the burning wreckage of a car, Xavier and Stevie Hunter race for the X-Mansion's access hatch, barely making it ahead of Colossus. Inside, Xavier turns the mansion's defenses against Colossus before leading him into the Danger Room. However, Colossus breaks into the control room, attacking Stevie, and Xavier is forced to mentally destroy the Peter Nicholas persona in order to free Colossus from Shadow King's control. Meanwhile, on Muir Island, the now-enthralled X-Men hunt for Forge, the only X-Man not claimed by the Shadow King, but he manages to bring Wolverine and Rogue to their senses. Back in New York, Xavier, Stevie and Colossus reach Salem Center, seeking medical attention, only to discover the townsfolk turned into a mob that is attacking a child. Xavier turns them away, but the Shadow King telepathically taunts him, saying the world is his now. With the rest of the X-Men captive, Xavier declares that to defeat the Shadow King, they'll need the help of his original students, X-Factor.

Firsts and Other Notables
This issue marks Chris Claremont's final contribution to Uncanny X-Men, as he writes the first half of the issue before giving way to Fabian Nicieza (who, already scripting New Mutants/X-Force over Liefeld's plots, will finish out the story next issue, and eventually become the regular writer of X-Men vol. 2). He still has the first three issues of the second X-Men book to come, and will eventually make several returns to the franchise of varying length and quality, but this marks the end of his 15 year, uninterrupted run on the book, a remarkable achievement in any era.

I've never gotten a definitive answer to where, exactly, in the issue, Clarmeont begs off, having heard everything from page 11, to page 12, to the end of the Shadow King's monologue as the points where his script ends and Nicieza's begins.

Certainly, by the time we're back on Muir Island, it seems clear Nicieza is at the helm, as little inconsistencies start popping up. The X-Men are suddenly up and at 'em after knocked out last issue (granted, there's a passage of time implied which could explain that), it's not entirely clear if the X-Men are hunting Forge or each other as part of some kind of training exercise, the North Atlantic Muir Island is being depicted like a tropical jungle, and Gambit's projectiles (which may be cards or knives, the art isn't clear) are said to be "psyche-charged",

There's no acknowledgement in this issue that it is Claremont's last; of course, he technically still has three issues of X-Men coming up, so it could be argued any kind of formal goodbye was eschewed in light of that. Of course, I'm fairly certain Claremont had already turned those issues in by the time this one went to press, and his ultimate departure from Marvel was know, at least behind the scenes, enabling an acknowledgement to have been included had editorial been so willing.

Colossus returns this issue, his mind and full memories intact after Xavier is forced to destroy the Siege Perilous-induced Peter Nicholas persona in order to break him of the Shadow King's control, making Colossus the final X-Man to return to normal after going through the Siege Perilous. He will hang around through the rest of this story, then become a mainstay of Uncanny X-Men following the relaunch. No word at this point as to what the beautified Calliston, last seen having a happy ending with Peter Nicholas in Uncanny X-Men #264, is up to at this point. 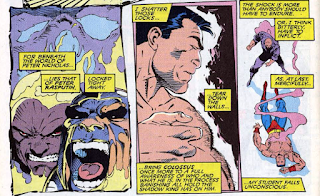 This is Stevie Hunter's last appearance until "X-Cutioner's Song".

This issue ends with Xavier declaring that in order to defeat the Shadow King, he'll need the help of his original students, setting up X-Factor's involvement in the crossover for its next chapter.

Creator Central
Andy Kubert, who previously filled in on X-Factor, draws this issue (and part of the next). Like Kubert, he'll eventually become the regular artist on X-Men, taking over for Jim Lee after he departs for Image.

Speaking of Lee, he gets a plotting credit on this issue as well.

A Work in Progress
The Claremont half of the issue features first person narrative captions written from Professor Xavier's perspective, akin to the Cyclops' perspective in X-Factor #68.

Professor Xavier's motivations for forming the X-Men gets another tweak, as he here states that he created the team chiefly to battle people like the Shadow King. 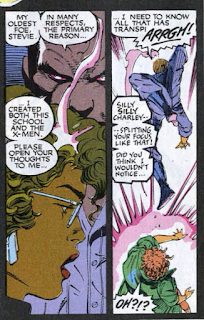 It's noted that the mansion's automatic defense systems have been disengaged, a reference to New Warriors Annual #1, in which the combined X-Force/New Mutants squad broke into the mansion. 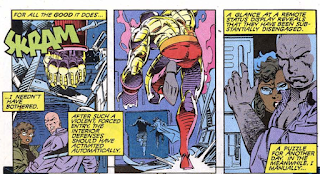 Professor X recreates his first meeting with the Shadow King, as depicted in Uncanny X-Men #117, via the Danger Room. 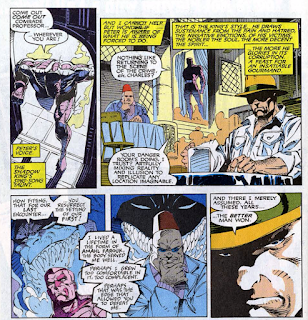 Shadow King is now saying his ultimate goal is not just world domination, but to claim the stars as well, echoing a similar sentiment from Apocalypse in X-Factor #68. 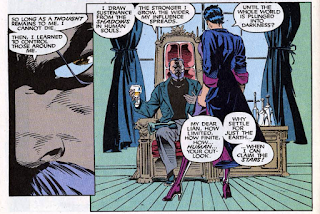 Forge, the only X-Man to escape the Shadow King's thralls last issue, has developed a doohicky that frees people from the Shadow King's control, and he uses it on Wolverine this issue. It also seems like he's modified a gun to fire some kind of blast that has a similar effect. 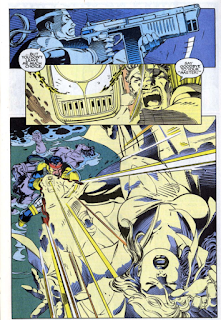 Claremontisms
One final Claremontism from Claremont himself - Shadow King says he possesses Colossus "body and soul".

But we quickly learn that Claremontisms won't leave with their author, as Gambit delivers another "bang, you dead", scripted by Nicieza.

It's in the Mail
A letter in this issue sings the praises of the various artists on the X-books, declaring his desire to see them all stick around. The response affirms that they are, with an added parenthetical of "we hope so". Which, of course, is hilarious in hindsight and is probably just a case of the self-deprecating tone struck my most letters page responses, but maybe (again, in hindsight) it's also an expression of some anxiety on editorial's part about the growing popularity (and power) of the future Image artists, in that they've reached a point where if they wanted to leave, Marvel has nothing left with which they could sway them to stay.

Teebore's Take
As the second chapter of "The Muir Island Saga", this is a perfectly cromulent issue. It moves the plot ahead incrementally (we find out the X-Men, sans Forge, are now thralls of the Shadow King, and Xavier decides to bring in X-Factor), but is mostly focused on Professor X (who is certainly entitled to headline an issue after nearly 75 away) and is chiefly concerned with bringing Colossus back into the fold, part of the storyline's larger effort to move pieces into place for upcoming relaunch. But as Chris Claremont's final contribution to Uncanny X-Men, this is a rather pedestrian outing - half an issue in which only two X-Men appear, and while he does a pretty great job with that material (Colossus is rightly presented as a frightening, unstoppable force of nature, while the Xavier narration makes clear how torn Xavier is over taking his student's one shot at happiness), it's a shame he doesn't get to say more, write more characters, or at least close out the in-issue narrative of the two characters he does get to write, before leaving the series. Thankfully, his work with the X-Men isn't quite done yet, and his actual final issue as the writer of the X-Men will afford him a bit more of an opportunity to leave on a stronger thematic note.

Next Issue
Tomorrow, the debut of a new force...an X...force, in X-Force #1. Friday, the original X-Men join the fight in X-Factor #69. And next week, the second "Unstacking the Deck" feature looks at the second series of Marvel Universe cards.