In a Nutshell
The Starjammers race Deathbird to the power known as the Phalkon. 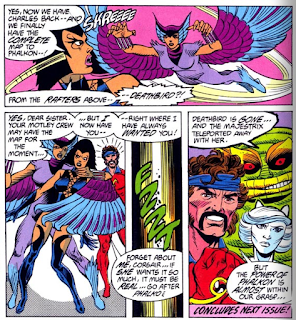 Firsts and Other Notables
This limited series is comprised of two square-bound issues, 48 pages each (I believe it was also printed on the higher quality Baxter paper, like Wolverine and Excalibur, but I don't have my hard copy issues handy to double check) that cost $4.50 a piece (as opposed to the usual $1.00 for a standard comic at the time). It was originally intended to run in Marvel Comics Presents (it was teased as such in letter columns leading up to its release, and each issue is divided into six 8 page chapters, which presumably represent the intended MCP issue breaks). For whatever reason, the story was repackaged into this prestige format limited series.

Art comes from Starjammers co-creator Dave Cockrum, and given his affinity for the characters, I assume this is a project he pitched to Marvel (he doesn't get a plot credit on the series, but I also assume he contributed to that as well). Excalibur editor Terry Kavanagh is the credited writer, one of his earlier writing gigs (he will eventually go freelance, and contribute some of the worst comics of the 90s to the line via X-Man).

Though he effectively joined the team circa Uncanny X-Men #200, this is one of the rare stories to feature Professor X as a member of the Starjammers. That said, he does spend most of the story either physically in a coma or dead, his mind merged with the Starjammer, so he's still not exactly contributing to the group in a traditional sense (and once again, and his power level seemingly requires a writer to sideline him).

Deathbird, who at this time is still the ruling monarch of the Shi'ar Empire (the Starjammers are leading a rebellion against her), serves as the villain of the story. She is backed up by the Imperial Guard, which debuts several new members in this story. First is Zenith, who is revealed, with much angst, to be the brother of  Starjammer member Raza. 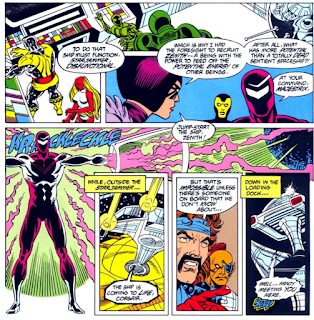 Then there's White Noise and Black Light. I don't believe any of these new Guardsmen ever appear again. 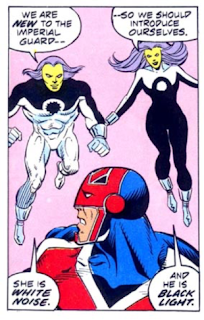 Both Excalibur and X-Factor (along with Ship) appear in the second issue. Phoenix ends up getting captured by Deathbird and a portion of her power stolen, while Ship helps defend against the Shi'ar armada encircling Earth. 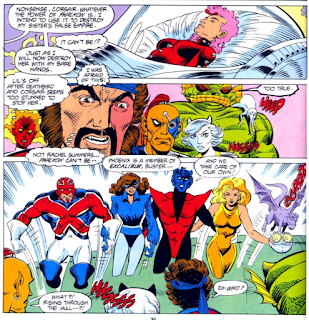 The story ends with Deathbird deciding to conquer Earth, a decision manipulated by one of her aids who is shown to be a member of a cult who worships Thanos. I don't believe anything ever comes of this tease.

Both issues include a Marvel Handbook-style schematic of the Starjammer. 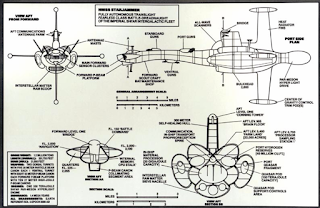 The Chronology Corner
The Marvel Chronology Project lists X-Factor's appearance in issue #2 as occurring after issue #58 of their series, though that doesn't quite work, as Ship is initially seen floating above the Atlantic Ocean and not hanging out as a skyscraper in Manhattan. More likely, their appearance here is between X-Factor #42 and #43, after they return from London but before Ship gets yanked into space by the Celestials.

Similarly, the MCP lists Excalibur's appearance as occurring after issue #34 of their series, but Meggan is wearing her original yellow costume and not the green one she acquired during the "Cross-Time Caper". However, Widget is shown to be a part of the team, so this is another Excalibur appearance that doesn't quite fit (as it must take place before "Cross-Time" yet Widget is fully functional).

A Work in Progress
Cr'eee, the little weasel-like creature that sits on Ch'od's shoulder, finds himself a family in this series, though I don't believe they ever pop up again. 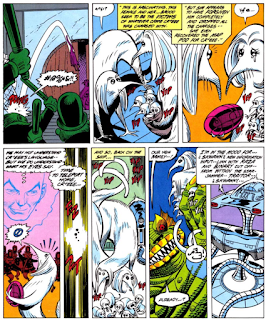 The Reference Section
Binary tries to come up with a battle cry for herself, starting with "flame on", which Corsair cautions may be copyrighted. 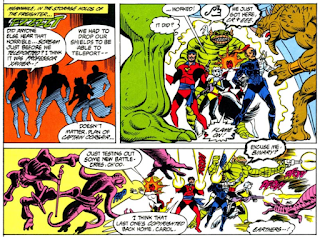 Later, Corsair tells Waldo to "beam up" the Starjammers. 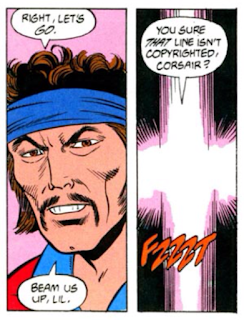 Like a Phoenix, From the Ashes
Deathbird, stealing a portion of Rachel Summer's Phoenix power for herself, declares herself Death Phoenix briefly. 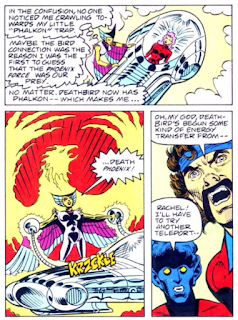 Then, Professor X gets a hold of the power, enabling him to operate, somewhat jokingly (I hope) as "Bald Phoenix" for a time. Though like much from this story, his time in the red-and-golds of Dark Phoenix goes mostly unmentioned in the future. 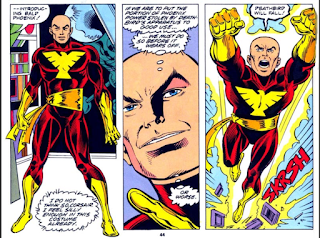 Teebore's Take
This is an odd little story. Like the Nightcrawler miniseries, I suspect it was something of a passion project for Cockrum. Not quite as whimsical as that series, it nonetheless seems like he's having fun with it, tossing in all kinds of space opera action beats. Yet given the somewhat prestige presentation of the story, readers could be forgiven for expecting something a bit more for their money, something a little more tightly-written, a little less meandering, something which has a greater impact on the X-Men narrative rather than, seemingly, being mostly forgotten or ignored.

Knowing it's a repurposed Marvel Comics Presents story helps clarify things a bit. It explains the episodic and repetitive nature of the plot (the Starjammer's shields, for example, go up, down and on the offensive about a half dozen times in the course of the story, to the point where a drinking game involving the word "shields" would likely kill someone), and the somewhat jumbled narrative (the flow of dialogue is, at times, harder to follow than it should be, and things like Raza's angst over his brother and a power struggle of sorts betwen Corsair and Binary go mostly unresolved). As a prestige limited series, we expect more; as a Marvel Comics Presents inventory story, this is all par for the course.

But that's not to say this is entirely without its charms. Tying in the Phoenix Force is a pretty clear case of borrowing from another, better, story to lend this one some narrative heft (though at least we're still in the outer space/Shi'ar milieu so it's not too much of a stretch), and "Bald Phoenix" is an idea best left ignored, but there is a really strong sense of the Starjammers as a band of rebellious pirates throughout the story, and the episodic chapter breaks provide an opportunity for more characterization than the Starjammers (aside from Corsair) usually get as perennial guest stars. And Cockrum is having fun with all this, the swashbuckling action, dueling starships, and the loopy chapter involving Cr'eee running from his world's version of the Keystone Cops. This is ultimately a slight, somewhat muddied story that runs on too long and never really goes anywhere, but it's also a fun piece of Cockrum's ouvre featuring characters who rarely get much time in the spotlight, and there's some value in that.