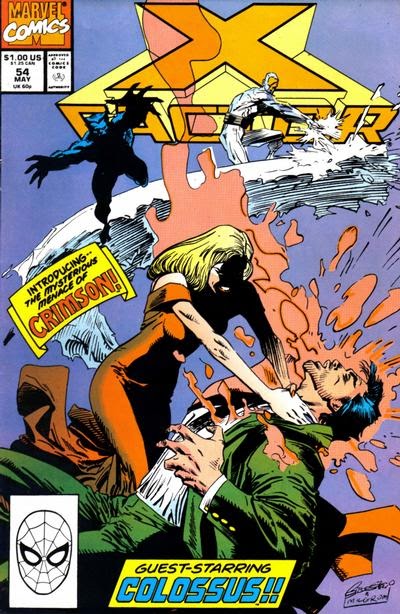 In a Nutshell
Hank & Bobby run into Colossus at an art gallery.

Plot
A drugged Archangel attacks the staff at the hospital where Officer Jones took him following his battle with Caliban, as he is hallucinating and believes the doctors are trying to amputate his wings. Scott, Jean and Hank arrive, and help the staff subdue their friend, after which they agree to take him back to Ship for further treatment due to his history with hospitals. Meanwhile, Bobby says goodnight to Opal. His departure is spotted by Peter Nicholas, who is preparing for his opening art show, while on the street below, a woman named Crimson feeds on the mental pain of a crackhead. The next morning, Jean, preparing to leave for a few days to clear her head, says goodbye to Scott. Days later, Hank and Bobby attend Peter's opening along with Opal and Trish. As Bobby is distracted by Crimson, who is also in attendance, Hank recognizes Peter, but Peter doesn't recognize him, leaving Hank to wonder if Colossus is undercover for some reason, or amnesiac. Just then, Crimson targets Hank, but she is unable to feed on him, as he's made peace with his painful memories. Instead, she sets her sights on Peter. Back at Ship, Archangel wakes up, but is still hallucinating, believing he's being attacked by Apocalypse, and Cyclops is chagrined that X-Factor failed to remember that Ship is where Archangel was born. Still delusional, Archangel flies off. Back at the art gallery, Hank follows Crimson and Peter up to the roof, where he's able to stop Crimson from feeding on and killing Peter, causing her to disappear. They return to the party as Crimson watches from afar, still hungry for real misery, just as she spots Archangel flying overhead.

Firsts and Other Notables
Peter Nicholas, the post-Siege Perilous, amnesic Colossus, guest stars in this issue (along with, briefly, Phillip Moreua and Jenny Ransome), part of an increased fluidity between this title and Uncanny X-Men at this time. 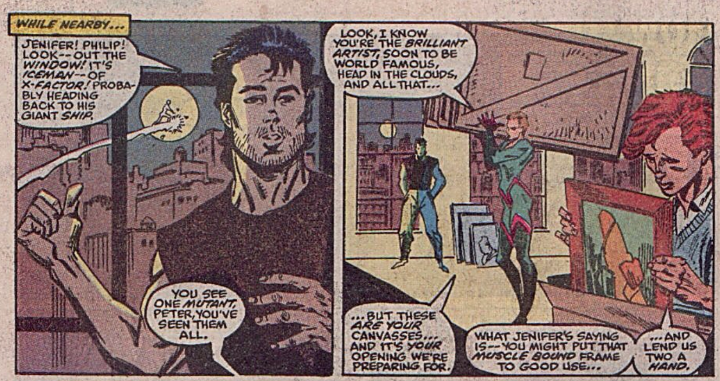 Similarly, Jean Grey takes a leave of absence from X-Factor this issue in the wake of Scott's marriage proposal, hoping to get a better handle on her identity now that she's sharing memories with Phoenix and Madelyne, setting up her appearances in Uncanny X-Men #261-264. 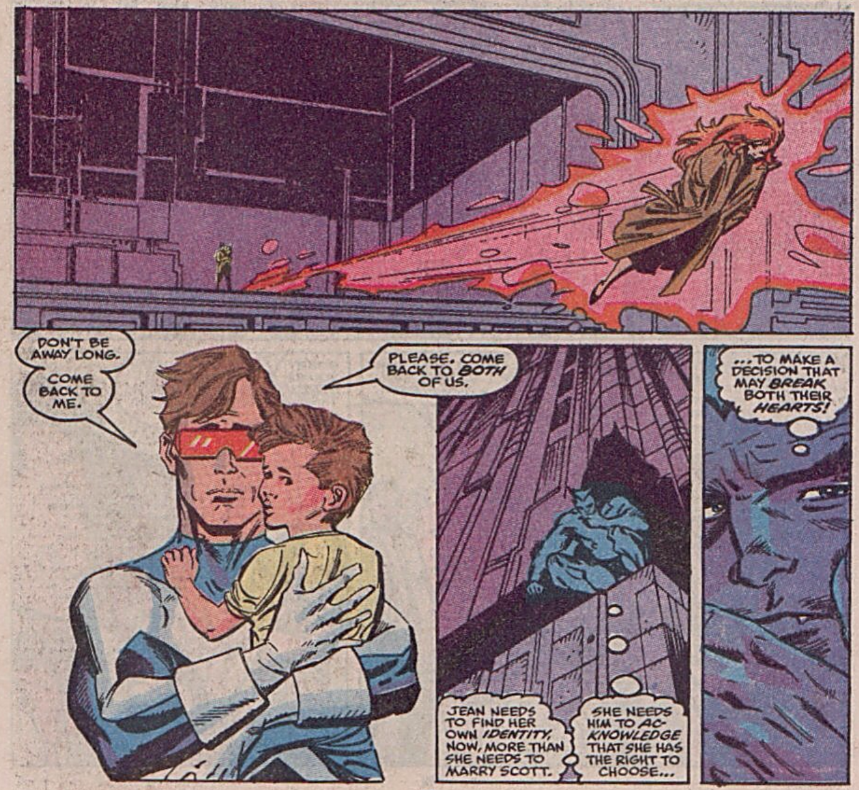 Crimson, a Selene-esque psychic vampire who feeds on people's mental anguish, appears for the first time this issue, and she mentions a group of similar individuals, the Ravens. They will serve as the antagonists of the series' one big pre-"X-Tinction Agenda" storyline moving forward. 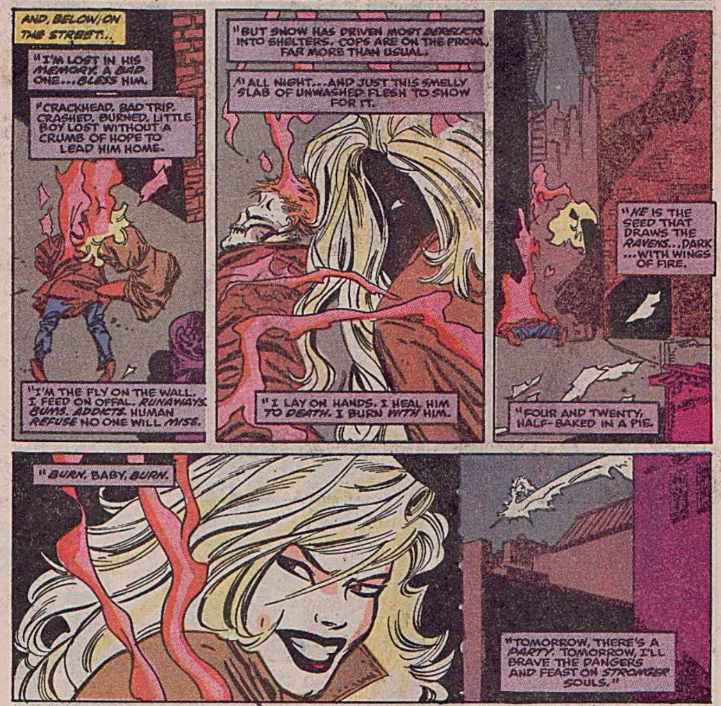 Somewhat curiously, Marc Silvestri provides the pencils for this issue, the same month as his final issue of Uncanny X-Men. Of course, Al Milgrom is still hand as inker, keeping Silvestri's art from looking too good.

The Chronology Corner
Jean appears here prior to Uncanny X-Men #261.

A Work in Progress
Skyscaper Ship is drawn so as to suggest that he towers over even the tallest buildings in the city. 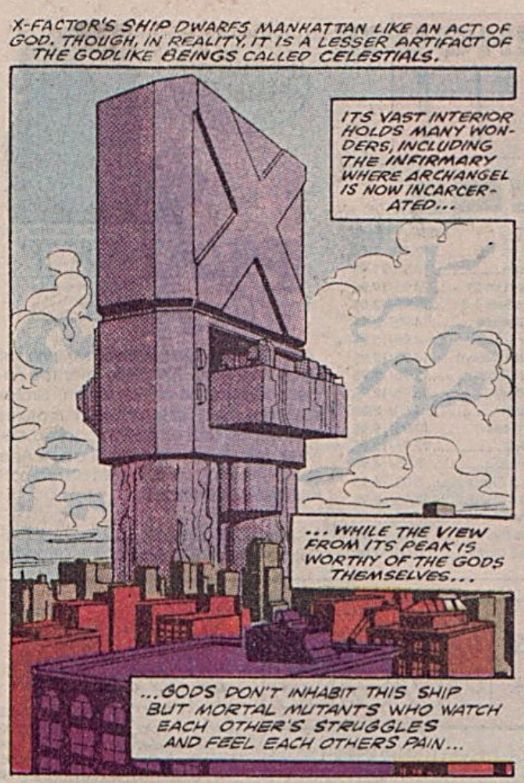 Young Love
Though this issue takes places within hours of the previous one, the Opal/Bobby relationship seems fairly serious, with the two of them easily teasing one another and Opal urging Bobby to come to the gallery opening as himself, not Iceman, given that when he says goodbye to her early in the issue, that's the end of their first date, after having only met a few hours earlier.

Teebore's Take
While Crimson and the Ravens, here and in future issues, are about as annoyingly-angtsy and teeth-clenchingly melodramatic as you'd expect from the basic concept of "psychic vampires", like most of this stretch of issues, the better material is happening on the fringes of the main story: Hank and Bobby out-on-the-town, just like in the days of the original X-Men, the blossoming Bobby/Opal relationship, the callbacks to both Archangel's post-"Mutant Massacre" and "Fall of the Mutants" storylines, the easy interplay between this series and Uncanny, with Jean Grey heading there and Peter Nicholas popping up here. It all brings back to the series the sensation that these issues are just chapters in a larger narrative, so much so that the main Crimson/Ravens plot in this next run of issues is mostly forgettable, even beyond the fact that it's mostly forgettable because it's also not very good.