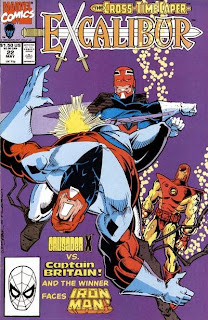 In a Nutshell
Excalibur foils the Shadow King and Iron Man's plot to assassinate the world leaders.

Plot
Nightcrawler is interrogated by Dai Thomas and a sympathetic Alysande Stuart, who is inclined to believe Nightcrawler's repeated assertion that he is not from their world. Meanwhile, Crusader X visits Xavier's Mansion in the wake of the Shadow King's attack, and learns from Security Chief Cable that they have no idea who is responsible, but that Jean Grey's car was spotted leaving the grounds after the attack, and Crusader X vows to track her down. Outside the Hellfire Club, Rachel recalls her past experiences with the Shadow King in her home reality, and finds herself scared to face him again. On another Earth, Kitty Pryde checks on the Warwolves, still imprisoned in London's zoo. Back on Crusader X's world, Courtney Ross is attacked by a group of muggers and saved by Excalibur, who believe her to be this world's version of Kitty based on their shared appearance. 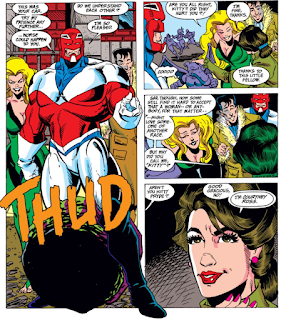 At the Hellfire Club, the Shadow King presents Tony Stark with a subdued Rachel, while at the Tower of London, Nightcrawler escapes from his cell just as his teammates arrive to rescue him, which leads to a fight between Captain Britain and Crusader X. Meanwhile, Iron Man and Phoenix infiltrate the World Summit with the goal of assassinating the world leaders gathered there, but Phoenix reveals her subservience to be an act, and attacks Iron Man, telepathically alerting the rest of Excalibur to help. Meggan responds, and after Lockheed breaks up the Captain Britain/Crusader X brawl, the rest of the heroes do as well, foiling Stark and the Shadow King's plans. However, no evidence of the Shadow King or any wrongdoing is uncovered by WHO at the Hellfire Club, and Nightcrawler assures a dejected Phoenix that though the villain got away, the good guys still won the day.

Firsts and Other Notables
Rachel reveals that it was the Hellfire Club who led the attack on the X-Men in the Days of Future Past timeline from which she hails (as seen most dynamically in New Mutants #18), and that they, in turn, were under the control of the Shadow King, something that, for all the play the "Days of Future Past" timeline gets in the years to come, isn't ever really referenced all that much outside of this story. 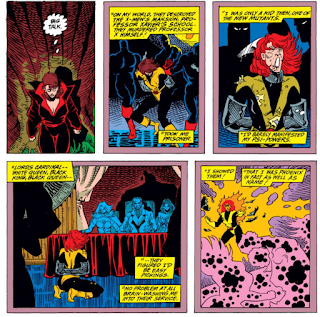 In her flashback, the Shadow King tells Rachel he's been waiting a long time to meet her, with a footnote pointing us to Excalibur Special Edition #3 and #4 (on sale this summer!) for the explanation to his comment; that story, in a slightly revised form (it takes place in the past of the main 616 universe, not the alternate timeline from which Rachel hails), will actually be told in the True Friends limited series in 1999, with the next Excalibur pseudo-annuals featuring different stories entirely, for reasons of which I'm unaware.

Rachel's flashback also suggests a link between Shadow King and Mojo (in that the former seemingly handed Rachel over to the latter at some point), another plot thread that I don't think gets much traction outside this issue. 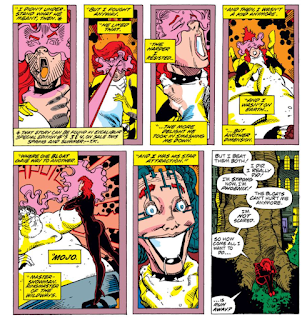 Cable (albeit an alternate reality counterpart) makes his first appearance outside of New Mutants, as the security chief of the alt X-Men in this story, suggesting that either Claremont was paying attention to New Mutants and already had a feeling that Cable was going to be a big deal, or that someone suggested he used the character here (please note: Bob Harras is not the editor of this series). 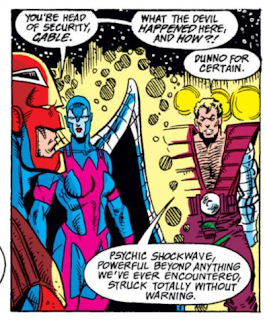 A Work in Progress
Continuing the Stuart gender swap of the previous issue, this world's Archangel is female. 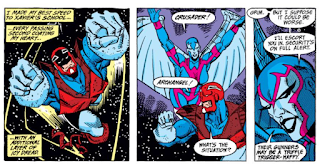 Crusader X is confirmed to be Brian Braddock, though it's suggested in a couple places he is of American Indian descent.

The Reference Section
The novel Quiet Pools by Michael Kube-McDowell is referenced as something akin to a scientific text/theory (he's a professor on Crusader X's world).

Teebore's Take
As with the previous issue, this is another one with a pretty good story let down by average (at best) art. The wrapup to the Crusader X portion of the larger, neverending "Cross-Time Caper", there's some really interesting things in this one. The implication that the Shadow King is at least in part responsible for the dystopia of "Days of Future Past" has ramifications not only for one of the X-Men's all time great stories, but also for the story currently unfolding in Uncanny X-Men (ie if Farouk had a hand in creating the DoFP world, what could his present day counterpart, currently ensconced on Muir Island, do to the X-Men - a question that is probably meant to be read as setup for the then-upcoming but ultimately-aborted "Mutant War" storyline, of which Excalibur was meant to play a larger part). Dropping Excalibur in a world not unlike its own, in terms of having superheroes with a passing familiarity with the tropes of the genre gives us a neat sequence where Nightcrawler and Alt-Alysande Stuart argue that Nightcrawler is in fact from another world, plus we get Lady Archangel and the first acknowledgement of Cable outside of New Mutants. It's just a shame the issue doesn't feature better art.