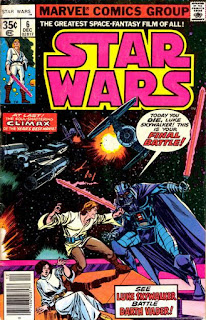 In a Nutshell
Luke blows up the Death Star with an assist from Han and Chewbacca.

Plot
As the Rebel pilots approach the Death Star, the Imperials respond with their turbo lasers, but the Rebel craft are small enough to evade the guns, prompting Darth Vader to lead a group of TIE fighters against them. As the Imperial ships approach, Luke finds himself wishing Han Solo and Chewbacca were with him, then destroys a ship targeting Biggs. Shortly thereafter, Biggs mourns the loss of his friend Porkins, and then Luke's squad leader starts an attack run on the trench leading to the exposed exhaust port. But Vader destroys Blue Leader and his wingmates, leaving only Luke, Biggs and Wedge Antilles to destroy the Death Star. 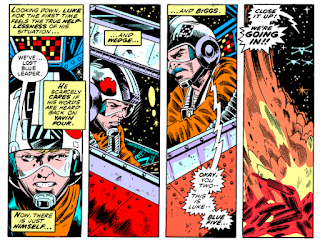 Inside the station, Governor Tarkin is advised there is a danger the Rebels could destroy the Death Star, but he refuses to evacuate. Outside, Luke hears Ben Kenobi's voice as he begins his attack run. Racing down the trench, Vader destroys Biggs and Wedge is forced to pull out after his craft malfunctions, leaving Luke alone. Just as Vader is about to fire on him, one of Vader's wingmen suddenly explodes, and the Millennium Falcon appears, flying out from Yavin's sun. Another shot sends Vader spinning uncontrollably into deep space, and Han tells Luke he's all clear. Using the Force, Luke fires his proton torpedoes, landing a direct shot. As Luke and the Falcon fly clear, the Death Star explodes. Later, Princess Leia presents Luke and Han with medals, and along with Chewbacca, Artoo and Threepio, they stand awash in the cheers of the assembled Alliance.

Firsts and Other Notables
This issue marks the conclusion of Marvel's adaptation of the first Star Wars film. While it seems clear the initial plan was for Marvel to adapt the movie and then, if it was successful, continue the series with original stories, I don't know at which point after the film became a smash hit & cultural phenomenon and sales reports for these issues came in that the decision was made to keep the series running, but it was made in time for this issue to tease the next at the end.

Fan favorite Wedge Antilles, the only Rebel pilot to survive an attack on two Death Stars, appears for the first time in this issue. While Wedge made frequent appearances in Dark Horse's Star Wars comics as well the Bantam and Del Rey Expanded Universe novels, I'm curious to see how much, if at all, he appears in this series, given that it was published at a time when, presumably, Wedge's following hadn't quite developed yet (or made itself as known). 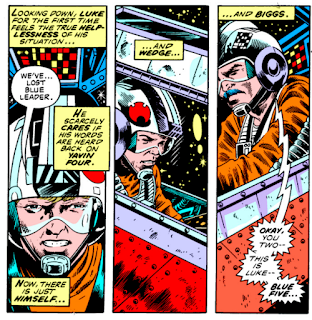 Biggs, who had a bit more of a presence in this series than in the original cut of the film, having appeared in the first issue as well as the last one, of course dies in this issue, killed while acting as Luke's wingman during Luke's trench run. 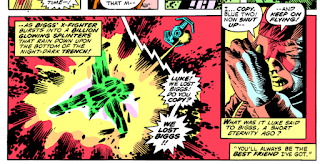 Porkins, the heavyset pilot who dies during the attack on the Death Star, also appears and is killed in this issue. He is said to be a friend a Biggs', with the first name of Tono and the unfortunate nickname of "Piggy". The nickname actually came from Alan Dean Foster's novelization of the movie, while "Tono" is original to this issue. A later roleplaying sourcebook gave Perkins the first name of Jek (the sourcebooks of the late 80s and early 90s are the source for a lot of names for the otherwise unidentified characters and species in the films), and the two names were later reconciled such that "Jek" is Porkins' first name and "Tono" his middle name. It is unclear, however, if the name "Tono" has survived the Expanded Universe purge. 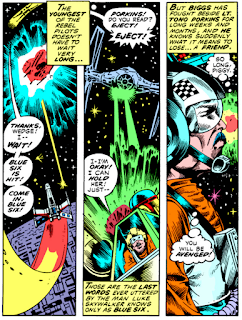 Roy Thomas, perhaps sensing the development of a popular sentiment amongst fans of the film, is careful to note that Chewbacca will indeed be receiving a medal along with Luke and Han for his role in the destruction of the Death Star, and that he isn't getting it at the ceremony simply because Princess Leia isn't tall enough to put it around his neck.

Another misleading cover in the classic comic book style on this one; Luke and Vader do indeed face off in this issue, but a one-on-one lightsaber duel for the life of Princess Leia is pretty far removed from what actually happens.

A Work in Progress
As with Han Solo the space-mercenary last issue, the narration in this one references the "space-gods" and "space-winds", while Leia is a "space-princess."

Similarly, Darth Vader swears to the "Immortal Gods of the Sith".

Rebel technicians are referred to as "technicos" for some reason.

The next issue blurb at the end of the issue refers to the main characters collectively as "Star Warriors", as good a name as any for the group of Luke, Han, Leia, Chewbacca, Artoo and Threepio. 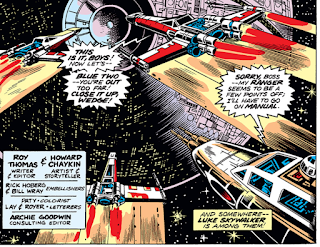 A minor difference, but Grand Moff Tarkin, when told the Rebels could possibly destroy the Death Star and is urged to evacuate, doesn't say "Evacuate? In our moment of triumph?" as he does in the film. Though the line probably wouldn't be the same without Peter Cushing's delivery anyway.

Being able to pair words with pictures, the destruction of the Death Star is presented in this issue with much more pomp and circumstance than the simple explosion of the film, a full page splash with narration describing in detail what's happening. 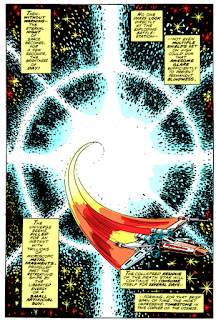 "Luke Skywalker is a jerk!"
Landing back on Yavin Four after destroying the Death Star, Luke is kind of abrupt in the way he orders Artoo to be repaired.

Young Love
Han and Leia hug each other after the Death Star explosion, in a much more romantic way than in the film.

Teebore's Take
The conclusion to Marvel's adaptation of A New Hope, this issue is another exercise in adaptation. Thomas, after wisely shoving the more talky setup into the last issue, turns over the entirety of this issue to the climatic assault on the Death Star and its immediate aftermath, the end result being a charged, action-packed finale to the story, albeit one with a different energy than the film. Again, as a movie has much more control over the pace at which the narrative is consumed, this issue isn't nearly as successful at creating suspense as the film, where the Rebels are chipped away one by one until only Luke remains, stripped of his allies and left with nothing but the Force (and the cheer-worthy last minute assist from Han & Chewie) as he races down the Death Star's trench. It's a fantastic bit of suspense filmmaking, a tense scene even when knowing Luke will succeed, and the comic, lacking a score and unable to control the tempo of the events, is unable to match it even while the narrative beats remain the same

Instead, Thomas & Chaykin play to the strengths of their medium and tell a much more intimate version of the story. Whereas the film, for all its (money-saving) cuts to shots of Luke and his fellow pilots in their cockpits, is big, widescreen action, much of this issue is drawn in close-up, the various ships and/or their pilots filling the panels, putting the reader much closer to the action. Some of the flow of the action sequences are lost as a result, but a greater understanding of the pilots' reactions to the action is gained. Thought bubbles and narrative captions put the audience inside their heads, particularly Luke's, in a way film can't, such that a better sense of what Luke is thinking as he races down that trench is gained. Thus reactions to the same story are changed by the medium in which its being told. Neither is better or worse than the other, just different, the end result being an adaptation that differs enough in its approach to the material to make the overall experience of reading the story different than simply watching it.

Next Week
We take a look at Marvel's recent recolored hardcover collection of the New Hope adaptation.