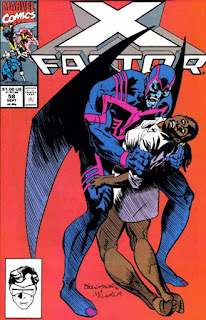 In a Nutshell
The Ravens are defeated as Archangel returns to normal.

Plot
As the Ravens prepare for the ceremony that will induct Archangel into their ranks, X-Factor, Banshee and Forge searches the city for him via the residual telepathic link between Marvel Girl and the Ravens, formed when the Ravens captured Archangel. Needing someone for Archangel to feed on after his transformation, Crimson retrieves Charlotte Jones. As the Ravens begin transforming Archangel, Marvel Girl is able to track the Ravens to the abandoned theater where they're performing the ritual, arriving just as Archangel is about to feast on Charlotte. X-Factor attacks the Ravens, creating a distraction that allows Crimson to attempt to absorb Archangel's power for herself. 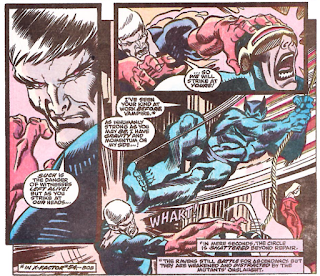 But Charlotte, realizing that Archangel was fighting the Ravens' influence, manages to remove the inhibitor belt placed on him by Forge, bringing him to his senses and enabling him to kill Crimson before collapsing. With the Ravens gaining the upper hand over X-Factor, Marvel Girl destroys their leader, which takes out the rest of the Ravens and causes their power to dissipate. In the wake of the battle, Forge is able to remove the pellet that's been poisoning Archangel, while he and Charlotte realize the Ravens' ceremony has left Archangel with some of Charlotte's memories, memories which he says enabled him to fight the Ravens' influence and served as his saving grace.

Firsts and Other Notables
After suffering through a string of guest star and fill-in artists since the climax of "Judgement War", X-Factor finally gains a new regular penciler this issue in Louise Simonson's former Power Pack and future Man of Steel collaborator, Jon Bogdanove, though his run will only last all of five issues (plus the "Days of Future Present" annual), and his already-dicey work is, of course, not helped by Milgrom's inks. 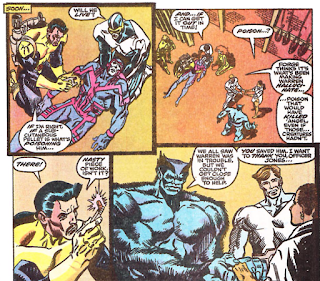 This issue reveals that Charlotte Jones has a son named Timmy; he'll pop up again a few times in future issues. 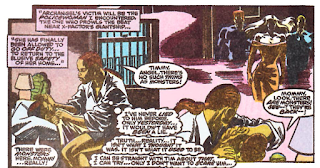 Crimson, along with the rest of the Ravens, are killed in this issue, notable only because it means they'll never pop up again. 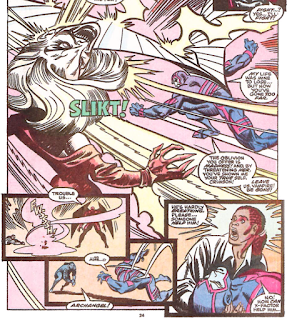 The Chronology Corner
"Days of Future Present" takes place between this issue and the next, while Forge & Banshee will next appear, following "Days", X-Men #270.

A Work in Progress
Cyclops points out that the Ravens aren't human, so X-Factor doesn't have to hold back while fighting them. 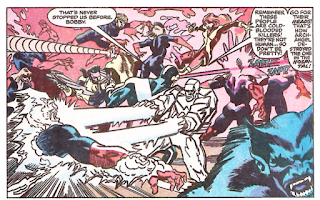 Artistic Achievements
One thing I will give Bogdanove credit for is drawing a nicely beast-like Beast, one who seems bigger and bulkier, with longer arms, than his teammates. 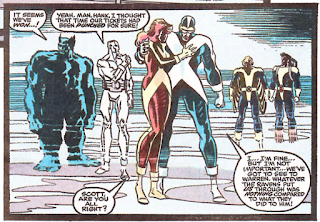 Young Love
As a result of Charlotte Jones' forced role in the Ravens attempts to transform Archangel into one of them, the minds of the two became linked, something that will both draw them closer and cause some friction in future issues. 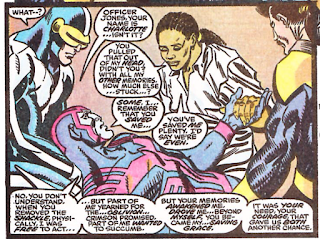 Teebore's Take
We've thankfully reached the end of the Ravens storyline, and once again, the Ravens are the least interesting part of the issue. Tying Charlotte Jones into the climax of the story is another shrewd use of the supporting case, drawing her and Archangel closer to something akin to a romantic relationship in the process, something we'll see develop a bit more in future issues. More importantly, the whole "Archangel is drugged and hallucinating and running around on his own while X-Factor flails about trying to capture him" plot that's been dragged out since issue #52 finally comes to an end, bringing to a close the series' latest, and thankfully final, extended period in which Archangel is cutoff from the rest of the team. Of course, the series is about to head into an extended crossover, after which there's really only two stories before another crossover that heralds the end of this iteration of the series, so it isn't like there's a lot of issues left to just feature the whole of X-Factor doing their thing, but hey, progress is progress. At least the Ravens will never be seen again.