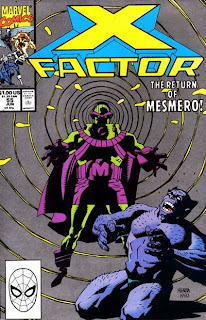 In a Nutshell
Beast encounters his old girlfriend Vera, under the sway of Mesmero.

Plot
Out searching for Archangel, Beast comes across his old girlfriend Vera Cantor, seemingly working as a prostitute and with no memory of him. Meanwhile, Bobby is saying goodnight to Opal after a date when he spots a shadow he thinks is Archangel, but it just turns out to be a kite. However, Archangel is nearby, hallucinating that the city is in flames as a result of Apocalypse's final triumph. The next day, Iceman and Beast continue searching for their teammate, and Beast spots Vera once more, this time a cellist on the way to practice. When she leaves her cello case behind, Beast tries to return it to her, but it explodes. When Beast catches up to her again, she's working as a hot dog vendor, and Beast is attacked by a monster hiding in the hot dog cart. 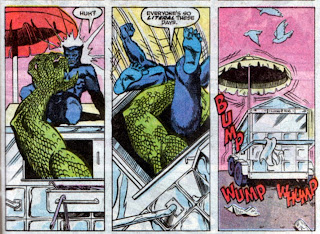 Defeating the creature, he chases Vera into the subway, where Mesmero emerges, revealing he's hypnotized Vera to get revenge on Beast. He then sets three humanoids monsters against Beast, but the sight of Beast being attacked brings Vera to her senses, and she turns on Mesmero. Beast is able to defeat his foes, though he's forced to throw one in front of an oncoming train, which turns to ash when its hit. With Mesmero escaping in the confusion, Beast tells Vera what happened, then walks her home, much to the dismay of Infectia, watching from afar, who had tracked down Vera and hired Mesmero to capture X-Factor for her.

Firsts and Other Notables
Vera Cantor, Beast's Silver Age librarian girlfriend who briefly appeared early in X-Factor with a New Wave makeover, appears in this issue. She tells Beast she's teaching and is aware of his relationship with Trish, and they part amicably. This is her last appearance to date. 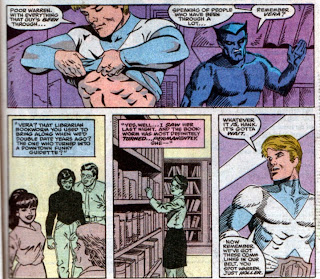 Vera is a pawn of Mesmero, appearing in an X-book for the first time since Uncanny X-Men #112 (when he was unceremoniously sent crashing to the Earth by Magneto), and the final panels reveal that the involvement of both was orchestrated by Infectia, returning to the series following her last appearance in issue #31, as part of some larger scheme to get revenge on X-Factor, though nothing ever comes of this tease, and the next time Infectia appears, it will be when she dies of the Legacy Virus. 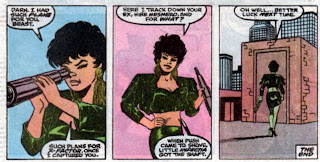 Beast has a bit of crisis of conscience towards the end of the issue, as he's forced to throw one of the creatures he's battling onto an oncoming train to save his life, killing his opponent, but the story later suggests the creature was all an illusion. However, the later reveal of Infectia's involvement makes it unclear if Beast was indeed fighting nothing, or one of Infectia's mutated Anti-Bodies (his foes resemble them, and the one in the hot dog cart and the one that hits the train turns to dust just like the Anti-Bodies did). Beast clearly walks away feeling he didn't take a life, but if he was indeed fighting an Anti-Body, he should be concerned, as they're simply normal people controlled and transformed by Infectia.

Peter David, who will take over as the regular writer of the series in fifteen issues-time, fills in as writer on this one. Terry Shoemaker, the quasi-regular penciller of the series, draws the first few pages, then Colleen Doran, who at one point was going to draw the sequel to Fallen Angels, finishes it out. Mike Mignola provides the cover for this issue.

A Work in Progress
Having caused some collateral damage, Beast briefly tells the crowd that Tony Stark will take care of the damages, before remembering he's not a member of the Avengers anymore. 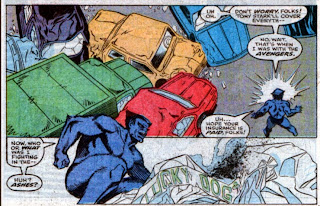 The Reference Section
Iceman makes a crack about Batman II, which hadn't yet been titled Batman Returns.

With Vera at one point believing herself to be a cello player late for practice, Beast chases after her carrying her instrument, saying "there's always room for cello" - a Peter David pun based on the Jello marketing slogan of the time. 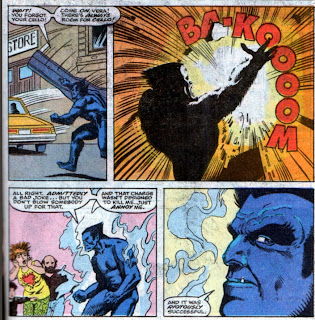 When a child spots Beast atop a subway car, she points him out to her mother, who responds that the show was cancelled, a reference to the Beauty and the Beast TV show starring Ron Perlman and Linda Hamilton. 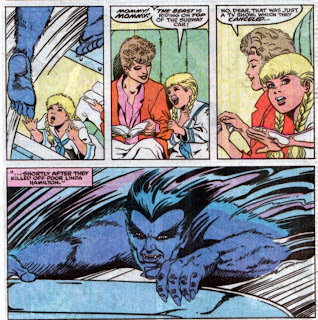 Young Love
Things are still going well between Iceman and Opal, as she invites him to come up to her apartment before he's distracted by an apparent Archangel sighting. 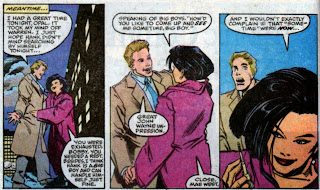 Teebore's Take
Though not technically a fill-in issue (Jean is still absent, the rest of the team focused on tracking down the hallucinatory Archangel) it still reads very much like one, with the return of an old supporting character and a villain who isn't otherwise connected to any of the book's ongoing plotlines. That said, it's still rather enjoyable. In the years before I read any but the earliest issues of X-Men, X-Factor was really my only experience with the original X-Men as a cohesive unit, and a lot of the history of that team I learned from the callbacks to it in this series. Following on the heels of the Locust in issue #52, this issue, then, is one of those callbacks, bringing back Vera (who did appear in earlier issues of X-Factor as well) and Mesmero.

The focus on Beast is also refreshing amidst all the Scott/Jean/Archangel focus in the series of late, and he serves as an effective vehicle for Peter David's more jocular writing. Doran's art isn't particularly flashy, but it's a definite step up from the workmanlike art that's populated the series of late (the shift from Shoemaker to Doran in this issue is noticeable). So while this issue doesn't exactly move the ongoing narrative forward or do much in terms of character development, it's nonetheless a fun done-in-one, one which takes advantage of the history of the book by featuring some little-used characters.

Next Issue
Next week: Spotlight on the Starjammers #1-2, Excalibur #23, and Wolverine #25