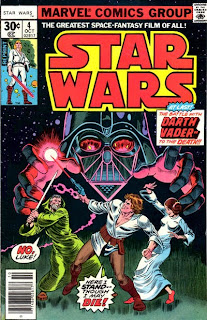 "In Battle With Darth Vader"
October 1977

In a Nutshell
Darth Vader and Obi-Wan Kenobi duel to the death.

Plot
Trapped by the encroaching Imperial Stormtroopers, Leia grabs Han's weapon and blasts an opening in the wall to a garbage chute, and the rest follow her into the garbage unit. Landing in the muck, Luke is attacked by some kind of tentacled creature, but is released when the creature flees after the walls start contracting. Luke desperately tries to call C-3PO to stop the trash compactor, but Threepio and Artoo are busy dodging Stormtroopers. Once they're safe, Artoo is able to stop the compactor just in time. Meanwhile, Obi-Wan succeeds in shutting off the tractor beam. As Luke, Han, Chewbacca and Princess Leia attempt to get back to the Falcon, they're discovered by Stormtroopers. Splitting up, Luke and Leia swing across a large chasm to escape, while Han and Chewie lead a squad of a troops on a chase through the station. 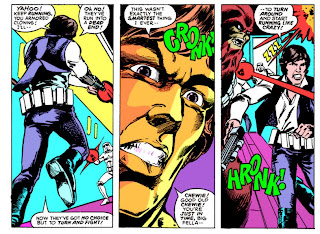 Meanwhile, Obi-Wan approaches the ship, but finds his way blocked by Darth Vader. Drawing their lightsabers, they duel, drawing the attention of both the Stormtroopers as well as Luke and his reunited friends, gathered near the Falcon's boarding ramp. Vader succeeds in striking down Obi-Wan, but his body disappears. Enraged, Luke fires on the Stormtroopers, drawing their attention, and despite Leia's desperate urgings, he only boards the Falcon when he hears Obi-Wan's disembodied voice. With everyone aboard, Han blasts off and the ship pulls free of the Death Star, Obi-Wan having done his job and enabled their escape.

Firsts and Other Notables
Obi-Wan Kenobi dies in this issue, killed by Darth Vader in the culmination of their lightsaber duel, though as in the movie, Luke hears his disembodied voice almost immediately after he dies, suggesting Ben wasn't exaggerating when he told Vader that to destroy him would only make him more powerful. 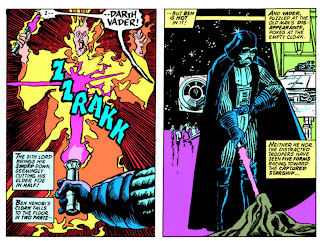 A Work in Progress
This is a particularly off model cover, with the red-eyed Vader looming over an Obi-Wan Kenobi wearing a green one-piece robe and a Luke who is more Prince Valiant-y than ever.

Blasters, the accepted term for most projectile weapons in the Star Wars universe, are referred to as the more generic "laser pistols" throughout this issue.

Similarly, Thomas is still putting quotes around "the Force", lightsaber is lightsabre, and the blades are routinely purple.

In a bit of world building added by Thomas, Han declares getting to the Falcon will be like flying through the "Five Fire Rings of Fornax". 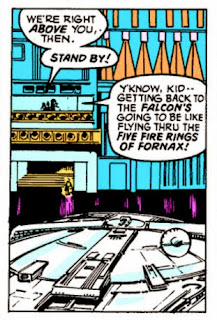 Um, Actually
Not sure if they were present in earlier drafts of the script, but there's a couple details in this issue that didn't make it into the film. First, after Artoo stops the trash compactor, Luke reads Threepio the hatch number of the garbage unit they're in so Artoo can open the hatch.

Later, the Dianoga follows the heroes out of the garbage unit and attacks them, with Han easily dispatching it with a blaster bolt.

The notion in the film, presented mostly visually, that Obi-Wan allows himself to be cut down by Vader so as to facilitate Luke and the others' escape from the Death Star, isn't really present here. Instead, it comes across more like Vader simply defeats him.

You Kiss Your Sister With That Mouth?
The moment in the film when Leia gives Luke a peck on the cheek for luck, just prior to their swing across the Death Star chasm, is presented here in a far more traditionally romantic way, making the whole thing even more icky in retrospect.

Artistic Achievements
Chaykin and Leialoha turn in some of their best work yet on the Vader/Obi-Wan lightsaber duel, particularly the opening sequence of panels that presents them as mirror opposites of one another. 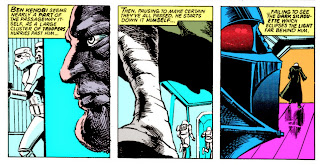 Teebore's Take
This issue is a great example of how pacing can be affected by different forms of storytelling. On film, the trash compactor sequence is a great bit of suspense filmmaking, a slow build from the moment the heroes land in the garbage pile, compounded by the dianoga attack, the ominous clangs as it leaves the chamber, and the slowly encroaching walls as the heroes desperately try to find a way out. On page, much of that suspense is lost, as the entire sequence lasts all of a couple pages. One of the great advantages of comic books as a storytelling medium is that any amount of time can pass in the gutters between panels; the downside to that is that it's difficult for the creators to express a specific passage of time, such that what builds slowly over several minutes on film passes in just a few seconds, with the speed of the reader, on page.

Conversely, given the relative limitations of filmmaking in the late 70s, the comic book can also improve on the source material in places. On film, the Obi-Wan/Darth Vader lightsaber duel is fairly tepid, a few taps of blades before Vader cuts down Obi-Wan. It's a thematically and plot significant moment, for the film and the saga as a whole, but it's not a technical achievement on par with some of the others in the film (and simply pals in comparison to later lightsaber duels in the saga). Whereas on the comic book page, with far fewer practical limitations on how to depict the fight, Thomas, Chakyin and Leialoha are able to juice up the series' first lightsaber fight, making it far more kinetic and fast paced, the kind of high-caliber comic book action that film couldn't yet replicate.

Next Issue
The flight to Yavin 4!