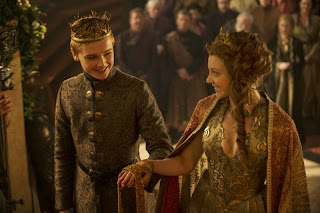 Braavos
In this episode, relationships are the name of the game. Marriages, friendships and even relationships with one's self. The latter type of relationship is what we encounter in Braavos.

Arya is in the House of Black and White which is decidedly gray on the inside. I suppose that makes sense. Anyway, she's mopping the floor. However, she's never seen Karate Kid so doesn't realize that  with someone who speaks in vague, philosophical terms then menial, everyday tasks are a given for training regimens. So, Arya just complains about the mopping. The-artist-formerly-know-as-Jaqen H'ghar says Arya should start servicing others instead of herself. That...came out poorly...

Later, a girl comes into Arya's bunk and asks her what her name is. Arya is hip to this jive, though, and says her name is no one. The girl doesn't believe Arya and starts to beat her. Arya calls the girl a cunt.

Arya tosses everything she owns into the ocean. She's ridding herself of her previous identity. However, Arya doesn't have it in her to toss Needle. So, instead, she hides it in pile of rocks. This will either A) Set up tension within the House of Back and White when the-artist-formerly-know-as-Jaqen H'ghar finds Needle B) Cause Arya to remember who she was just when it seems all traces of her former self has been wiped from her memory or C) Be used to signify that Arya will pretend to cut off all ties with her former self but, in fact, will never actually lose sight of herself.

Arya returns to the House of the Back and White (through which door, I don't know). She rededicates herself to her sweeping...er...training. The-artist-formerly-know-as-Jaqen H'ghar likes what he sees so he has Arya and the other girl sponge bathe a dead person. No reason for that has yet been given.

King's Landing
It's good to be king! Especially when your queen is Margaery. She wants a baby and Tommen, being a teenager, is happy to oblige her with as many attempts as it takes.

After Tommen enjoyed the benefits of his relationship with Margaery, Margaery discusses Tommen's relationship with her mother. Basically, Margaery calls Tommen a mamma's boy but in a way that makes it sound that she likes it…but Tommen doesn't. So Tommen meets with Cersei and is all, “You know what's awesome? Casterly Rock. Wouldn't you LOVE going back to Casterly rock?” Cersei's no fool, though, and I suspect she knows something is up but is, so far, powerless to stop it.

Later my nudity counter nearly breaks as the High Septon is role playing in brothel planning to have sex with a couple women-dressed-as-gods. I guess his relationship with his gods are more…intimate…than I would have assumed. It's weird and Lancel and the Sparrows are none too impressed. So they drag him out of the brothel naked, whip him, and generally humiliate him.

Winterfell
Speaking of relationships, is there any creepier than that of Petyr Baelish and Sansa Stark? Well, there will be, and that's the marriage between Sansa Stark and, ugh, Ramsay Bolton. Petyr has arranged this marriage to forge an alliance with Roose Bolton.

Roose Bolton wants Ramsay to marry Sansa because, with the death of Tywin (and, thus, his alliance with the Lannisters), Roose doesn't have enough men to defend the North. But, the North would be more agreeable to Bolton leadership if a Stark married in.

Sansa takes this arranged marriage as well as expected. But Littlefinger works his magic on her and convinces her that it's pretty much the only way she can come out of hiding. Sansa agrees to the marriage but I think she may plan to kill Ramsay or Roose or maybe that's just wishful thinking...

On The Road
Brienne and Podrick's relationship gets closer. Not in that way, you sickos. So far, there is no evidence as to whether Brienne has any "experience" with the man, the myth, the legend.

Anyway, they simply tell each other their origin stories. Podrick became Tyrion's squire as sort of duel punishment for both men. Brienne became loyal to Renly after he saved her from men teasing her at a ball. So, past relationships have helped strengthen a new relationship and Brienne agrees to train Podrick (which I'm sure will go smoothly).

The Wall
Jon Snow must come to terms with his relationship with his father. He is still given the opportunity to be officially recognized as a Stark but now he has two reasons to turn the offer down. First, he's Lord Commander of the Night's Watch. Secondly, he's Jon Snow.

Stannis Baratheon is ready to leave the Wall to take the North. But Stannis thinks the Night's Watch could come join him in that crusade. Jon says “Blah, blah, blah, oaths.” Stannis realizes he's talking to Ned Stark Jr. and takes his leave. Before Daavos departs, though, he tells Jon that serving the realm could be construed as making sure sociopaths aren't ruling.

Next we see Jon Snow holding a meeting. He's commands as expected: fairly. Despite Ser Alliser being none-to-fond of Jon he is still given the title of First Ranger because Jon still respects Ser Alliser's abilities.

Jon Snow proves he's his father's son in a scene that mirrors a scene from the very first episode where Ned beheads an insubordinate member of the Night's Watch. This time it is Jon doing the beheading and it's Janos Slynt's head that is rolling as we get are third execution in as many episodes.

Volantis
The relationship between Tyrion and Varys is beginning to crack. Or maybe that's just Tyrion's sanity. All Tyrion knows is he needs to get out of the carriage.

Tyrion leaves and enters Volantis. After a priestess gives a Melisandre-esque sermon, Tyrion decides to explore his relationship with hookers. Unfortunately, due to the complicated relationship with his last whore, Shae, Tyrion is no longer…up…to the task. What would Podrick think!

So, Tyrion does what he now does best, drink a whole lot. He then walks out to take a piss and guess who kidnaps him? Jorah Mormont. He presumably wants to use Tyrion as a bargaining chip to improve his relationship with Daenerys.

Other Thoughts
Excuse the lateness of this post. I'd tell you my excuses but none of them are good.

Maybe it's just me but this episode seemed more densely packed than most. (And that's saying something!)

In the opening sequence they still display the harpy statue atop the pyramid in Meereen. I expected more from this show.

Arya's time in the House of Black and White kind of mirrors her time in Harrenhal with Tywin Lannister.

I like the idea of Arya training to become (presumably) some sort of assassin but I don't like her losing herself in the process. (Of course, that's a classic George R.R. Martin move. Give the people what they want but in a way that they decide they don't want it.)

Also, so far, the scenes of Arya in the House of Black and White aren't exactly riveting.

So is the the-artist-formerly-know-as-Jaqen H'ghar's assertion that all the gods are in fact one god or that there is only one god among the gods that's worth their time?

I wonder how old the actor who plays Tommen is. Is a scene like the post-coitus scene with Margaery weird?

Tommen says he doesn't feel anything regarding Joffrey's death. Is that him recognizing that Joffrey was a sociopath or a sign that Tommen is a sociopath as well?

It's fun to see Cersei knocked down a peg or two but Margaery talking about all the sex she's having with the her son is still a bit weird.

Petyr Baelish tells Sansa that she's marrying Ramsay Bolton, which should be easier to swallow than marrying Roose Bolton himself. After she gets to know Ramsay...I'm not sure that's the case.

I hope Sansa tries to destroy the Boltons from the inside but I fear she'll fall for Ramsay for some odd reason...or be brainwashed by him.

Ramsay gave Sansa his word that he'd treat her well but what's his word worth, really?

It would've been nice to know Brienne's back story before Renly was murdered. At least that would've lent more weight to the scene of her holding his dead body. (It does bring new perspective to how she must feel that she's the one accused of murdering him.)

Why did Arya throw away her money? Couldn't she have at least given it to charity or something?

So, in Volantis, they tattoo slaves according to their jobs. Tears for sex slaves seems a bit...on the nose? I don't believe a society would be that self aware. Like, would customers at a brothel want to be constantly reminded at how sad the women they're buying are? In fact, I think some free people would want to convince themselves that the sex slaves don't have it that bad and other free people would just want to turn a blind eye to the misery. Regardless, a tear would be a bit too frontal and too much of a reminder of the atrocities this society is committing. Perhaps I'm over analyzing things here but I would think a different symbol would have been chosen by...whoever chooses these things.

Jon Snow: I heard it was best to keep your enemies close.
Stannis Baratheon: Whoever said that didn't have many enemies.

Tyrion: I can't remember the last face I saw that wasn't yours!
Varys: It's a perfectly good face.