In a Nutshell
Excalibur arrives on a world ruled by totalitarian justice.

Plot
Illyana Rasputin, the Sorcerer Supreme, casts a spell to direct Excalibur to her world, on the orders of crime kingpin Kitty Pryde, just as Kitty is targeted by the Justicers. Her advocate, Doug Ramsey, argues that their search is illegal, but Justicer Bull declares they have proof that links all the criminal enterprises in the realm to Kitty. Just then, Excalibur's train comes crashing through the building, sending Kitty out the window to her death in the process. Captain Britain instinctively tries to save her, but gets blasted by the Justicers, and when Meggan tries to save him, the poor quality of the air sends her falling as well. As Nightcrawler is arrested by his Justicer counterpart for being a mutant, Illyana orders the rest out, saying that with Kitty gone, their warrant is no longer valid. Outside, Captain Britain manages to grab Kitty just as they hit the toxic sludge that is the ocean, then fishes out Meggan, badly injured by the toxic world, as well. 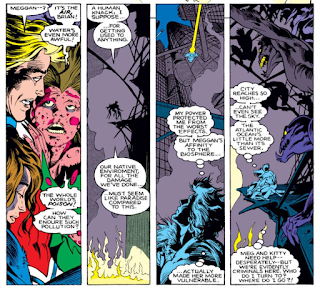 But Kitty succumbs to her injuries, telling Captain Britain that Illyana did this to her intentionally before dying. As Alistair tends to Rachel, weakened by the cross-time jumps, Illyana tempts him via his feelings for Rachel to help her become the ruler of this reality. As Nightcrawler escapes from the Justicers, Rachel wakes up and attacks Illyana. Everyone converges on Kitty's tower, including the Justicers, who try to arrest Illyana, prompting her transformation into Darkchilde. Aided by the arrival of the Lord High Justicer, Captain Britain's counterpart, and his sister the Chief Examining Magistrate, Rachel is able to defeat Illyana, removing her power and making her a normal kid again. The Lord High Justicer tells Excalibur of how their world became such a totalitarian state, and agrees that changes to the law are in order, as Excalibur promises to be on their way.

Firsts and Other Notables
Alan Davis is back! Not for good, or even for very long, but I'll take what I can get at this point, and his return is easily the best thing about this issue.

This issue casts Illyana as the Sorcerer Supreme of this reality, and also the villain, as she plots to usurp Phoenix's power to wrest control of the world from her Kitty Pryde. 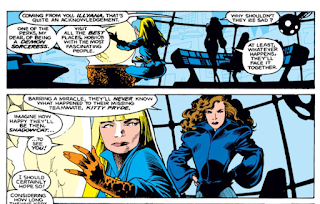 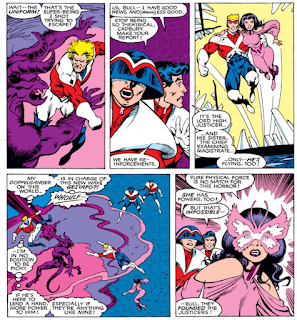 The Justicers, wearing variations on Captain Britain's costume, are most likely a nod to Judge Dredd, while the main Justice, Bull, is perhaps inspired by Cat's Laughing band member and writer Emma Bull. 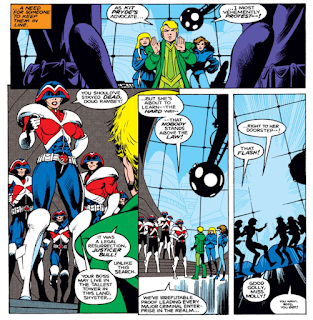 Teebore's Take
Another issue, another done-in-one chapter of the "Cross-Time Caper" that does little to advance the overall storyline. Thankfully, Alan Davis is back, which at least elevates the material a little bit. This issue is nice to look at, which saves it from being completely irrelevant, but even Claremont seems to be getting tired of the schtick: this is yet another dystopic world, one overrun by urban sprawl, in which it's a crime to be super-powered and/or a mutant, and a totalitarian regime is enforced by an extreme police force. The Judge Dredd homage is mildly cute, and there's some fun to be had in casting Illyana as the villain (though not as much as if Kitty was, you know, still part of the team at this point), but we're well past the point where this storyline can coast along on the strength of good art and mild cuteness. Enough already.

Next Issue
Tomorrow, Wolverine tells a story in Wolverine #25. Next week, he gets drawn by Rob Liefeld in Marvel Comics Presents #51-53.