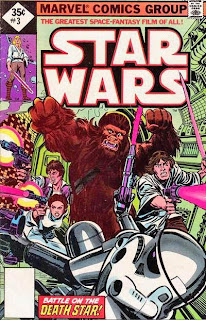 In a Nutshell
The Millennium Falcon is captured by the Death Star.

Plot
Aboard the Death Star, Governor Tarkin orders the destruction of Leia's home planet of Alderaan, forcing Leia to tell him the Rebel base is located on Dantooine. However, Tarkin, wanting a high profile demonstration of the station's power, orders Alderaan destroyed anyway. At the same time, aboard the Millennium Falcon, Ben Kenobi is overwhelmed by a disturbance in the Force. As it passes, he continues Luke's training until the ship reaches Alderaan. But when it drops out of hyperspace, it finds not a planet, but an asteroid field: all that's left of the planet. Spotting an Imperial TIE fighter nearby, Han Solo pursues it, and is led right to the Death Star, where the ship is pulled aboard via a tractor beam. 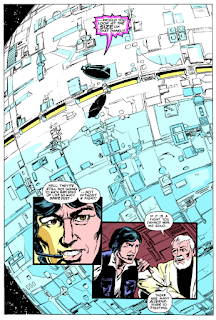 After stowing away in hidden compartments, Han and Luke disguise themselves as Stormtroopers while Ben goes on his own to disable the tractor beam so the ship can escape. Learning that Princess Leia is aboard the station, Luke hatches a plan to rescue her. Leaving the droids stationed near the ship, Luke and Han lead Chewbacca into the detention block, pretending he's a prisoner. When Chewbacca suddenly "breaks free", Luke and Han are able to wipe out the troops stationed there. As Han tries to call off reinforcements, Luke frees Leia from her cell. But they're quickly met by a retreating Han and Chewbacca, and Leia realizes they have no way to get out of the detention block. As Luke desperately calls Threepio for help, the Stormtroopers draw ever closer.

Firsts and Other Notables
Upon approaching the Death Star, Threepio declares that he's "got a bad feeling about this", the first such utterance of that Star Wars mantra in the comic book series. 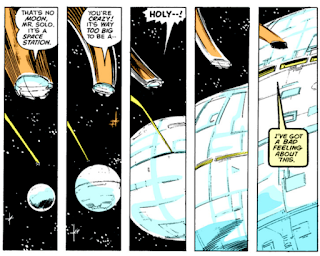 We see TIE fighters, the short range fighter craft of the Empire, for the first time.

Han and Luke meet Princess Leia in this issue, bringing together the Original Trilogy's trio of main characters for the first time.

A Work in Progress
The Force continues to get quotes, as does the "remote" Luke uses when training aboard the Falcon.

Obi-Wan is always referred to as Ben Kenobi throughout the issue.

Similarly, Han is routinely referred to as "Solo", even in dialogue.

This issue hints at the Imperial plan to allow the Millenium Falcon to escape and lead the Death Star to the Rebel base, a nice bit of foreshadowing that the film doesn't do. 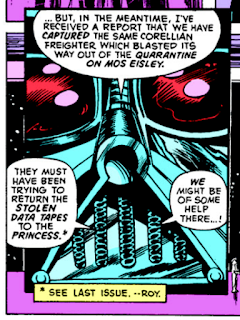 Um, Actually
Most of the Imperial officer uniforms are colored green throughout this issue, instead of gray seen in the movie.

Luke's lightsaber has a purple blade, not a blue one. 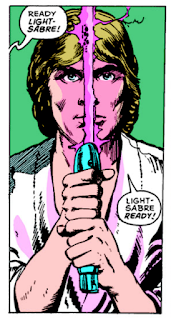 Luke's blast helmet, used in training with the remote, is just a silver blob (the remote is different too, of course). 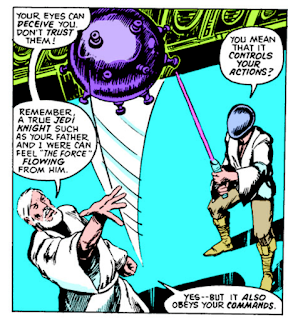 That 70s Comic
Luke drops in a bit of old school "every issue is somebody's first" exposition. 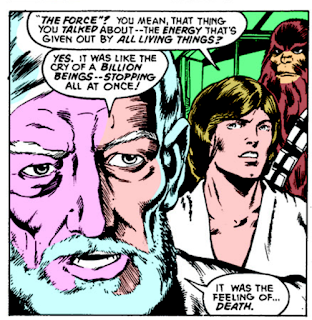 When Han and Luke are in the detention block attempting to rescue Princess Leia, Luke declares that a guard is about to trigger the alarm system. How does he know that? He's never been on an Imperial planet killing superweapon battle station before. 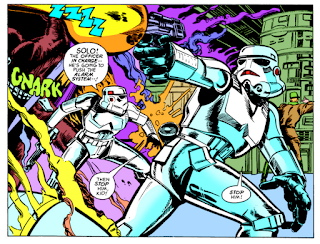 Teebore's Take
I've never developed a very strong opinion when it comes to Chaykin's art; I neither love nor hate it, and nothing in these first few issues seems likely to change that. For the most, Chaykin seems to have approached this project very much like the work for hire project it was, being chiefly concerned with telling the story as efficiently as possible. And with so many characters involved on page at any given time, he doesn't have a whole lot of time or space to get terribly clever or artistic with page layouts or panel construction. But for whatever reason, this is the first issue where the art really seemed to pop. There's a few panels, particularly a few closeup shots of characters, that are downright gorgeous, and the introduction of some more overt action elements to the story (lacking since the opening moments of the story) seems to have invigorated Chaykin. Nothing here suggests a new-found passion for the project, but perhaps getting to draw some more traditional comic book action scenes made the work feel a little less perfunctory, and that shows on the page.