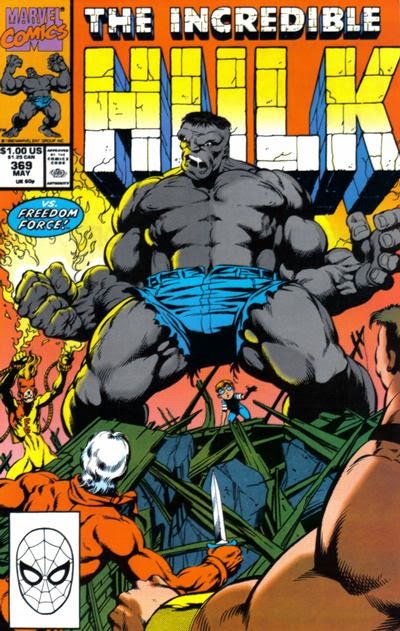 In a Nutshell
Freedom Force battles the Hulk.

Plot
Bruce Banner is taken in by a family whose home was recently destroyed by a hurricane, and he sees in their young son Jack a lot of himself. Meanwhile, Crimson Commando, Blob and Pyro are flying to South Carolina in pursuit of the Hulk, while Mystique follows up another lead on his location in New York. Posing as an FBI agent, she meets with an older woman who painfully reminds her of Destiny, but the creature she spotted turns out to be something other than the Hulk entirely. In South Carolina, Freedom Force tracks down Banner and tries to take him into custody quietly, without triggering the Hulk, but night falls, bringing him forth. Hulk proceeds to fight back, smothering Pyro's flame monster and easily tossing aside Crimson Commando. 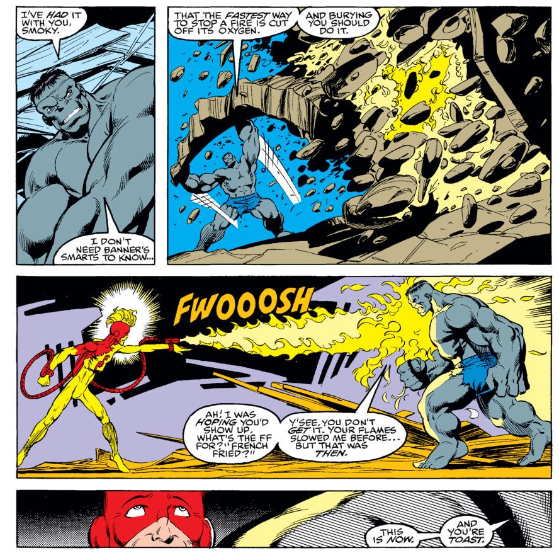 Getting increasingly irritated, he grabs the unmovable Blob's gut and begins pulling, until Blob is forced to uproot himself from the ground, at which point Hulk proceeds to bounce him through the air like a ball. However, Hulk unintentionally knocks Blob into the house of the family that had befriended Banner, destroying the home and trapping Jack in the wreckage. Despite himself, Hulk tries to save the boy, and with Crimson Commando's help, they pull him from the wreckage, still alive. Hulk leaps off to find an ambulance and returns minutes later carrying the vehicle. As the paramedics load Jack inside, Hulk knocks out Crimson Commando then gathers up the ambulance once more, and leaps away.

Firsts and Other Notables
In two pages of this issue, Peter David smooths over some of the chronology tangles that came about from Freedom Force appearing in Avengers #312 so soon after being fairly trounced by the Reavers in X-Men #255, confirming that Blob, Pyro, and Avalanche were operating of their own volition, with Mystique asserting it was stupid of them to think Freedom Force had disbanded just because she needed some time off to deal with Destiny's death, and further revealing that she helped rescue Blob and restore him to normal size after being shrunk by Dr. Pym. We even see Avalanche still recovering from the wounds he received from Lady Deathstrike, with Mystique admonishing him for wrecking his stitches when he went out with Blob and Pyro. 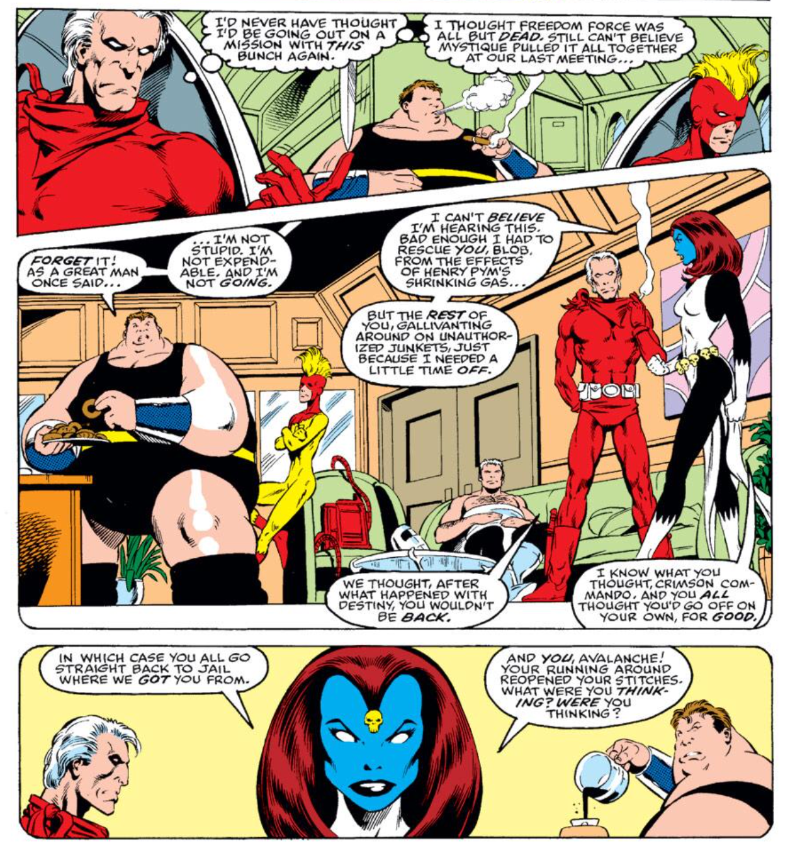 Art in this issue comes from regular Hulk artist Dale Keown (who just became the new series artist as of issue #367), most well-known for his run on on this series and his creator-owned Pitt from Image Comics. I don't believe he's done much of late, which is a shame, since his work in this issue, at least, is really strong, and I'd love to see more of it. He's inked by New Mutants co-creator Bob McLeod.

A subplot page in this issue features a mysterious figure named Prometheus searching for Hulk; I believe this is setup for Hulk's eventual involvement with the group called Pantheon.

A Work in Progress
Blob notes that even Daredevil defeated Freedom Force recently, a reference to Daredevil #269. 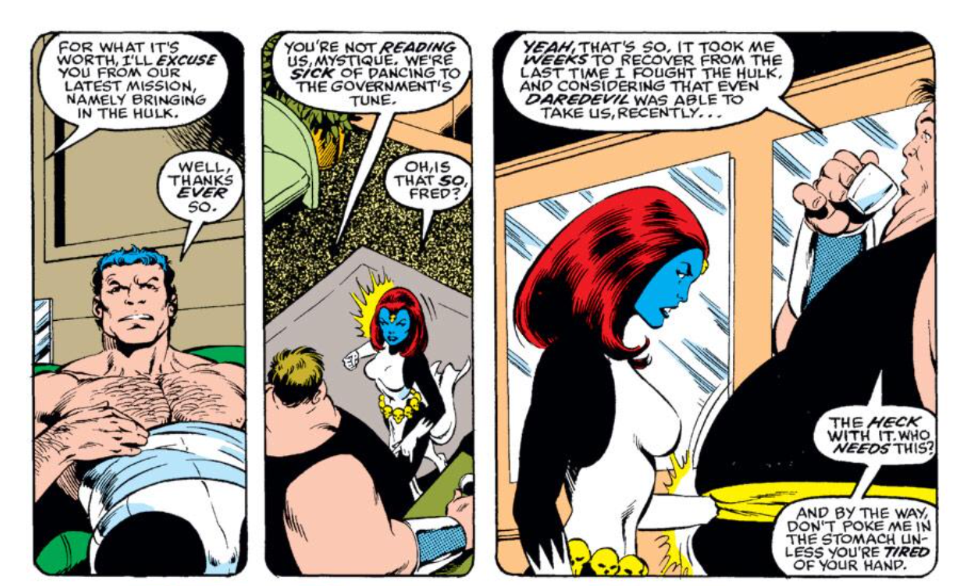 Mystique is still mourning Destiny's death, finding it difficult to interact with an older woman who believed she'd spotted the Hulk. 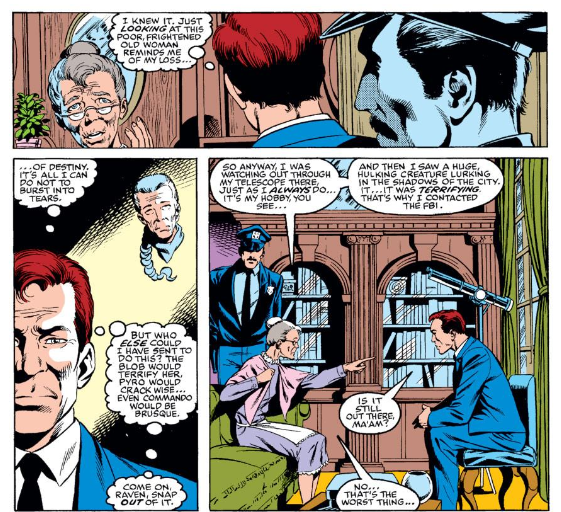 Hulk takes advantage of Blob's ability to not be moved by basically grabbing his belly and stretching him out until Blob is forced to move, which is pretty funny. 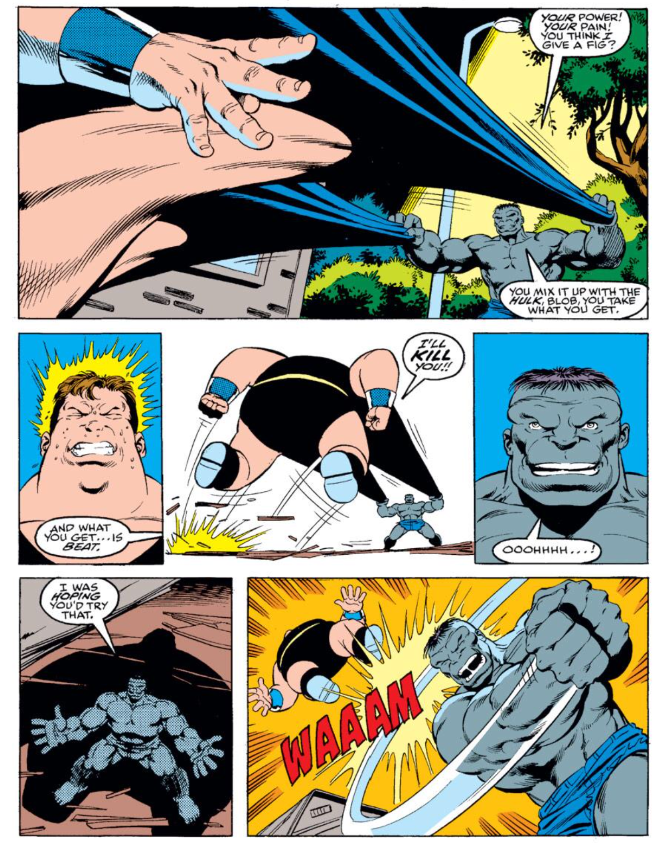 Crimson Commando deals with something of a crisis of conscience throughout this issue, despairing over the fact that all he's done with his life is fight, and wondering if Freedom Force is even doing any good. 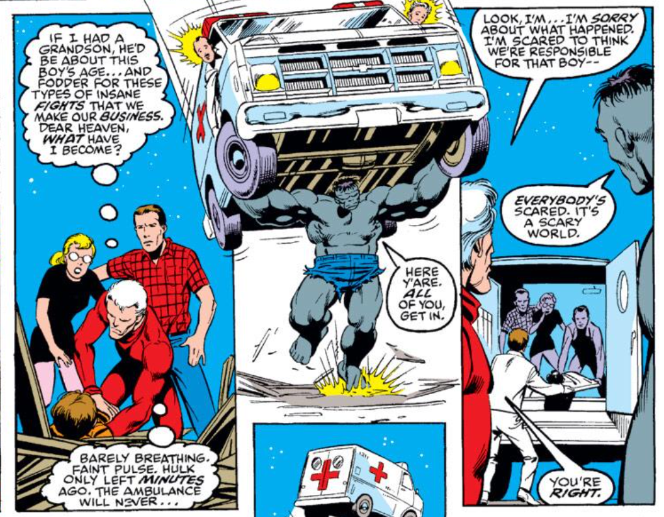 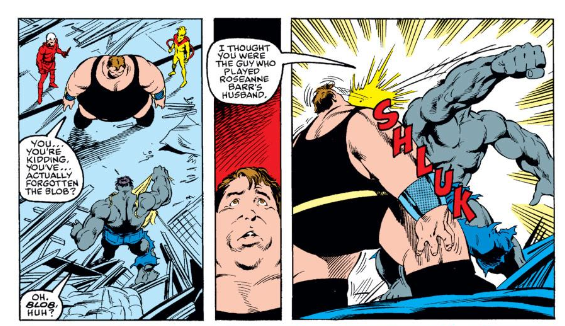 Teebore's Take
This issue is actually a lot of fun. In addition to being a welcome continuity patch, smoothing over Freedom Force's "Acts of Vengeance" appearance relative to their battle with the Reavers, and a nice companion piece to Daredevil #269, in which Blob and Pyro faced off against a different non-X-Men foe, it also works as an effective done-in-one issue. Whatever is happening in Hulk's book prior to and after this issue is irrelevant, and while knowing the recent goings-on with Freedom Force adds to the story, not knowing wouldn't take anything away from it, and still offers some characterization for the villains. Crimson Commando even gets a nice little character arc, realizing that for as many years as he's lived, all he's done is fight a lot, which adds a melancholy touch to the character I wouldn't have minded seeing touched on elsewhere.

And, of course, there's also something fun in seeing the Hulk face off against someone he can just wail on mercilessly, and the Blob/Hulk fight doesn't disappoint, taking full advantage of Blob's "unmovable" power for great comic effect. Dale Keown is an artist whose work I'm not terribly familiar with, but I really like it here. It has the feel of animation grounded in reality: both Hulk and Blob are larger than life, but not grotesquely so, and even the more mundane characters are drawn interestingly (I like the oversized glasses on the little kid). It's almost Alan Davis-esque, and helps elevate an already-enjoyable story.

Next Issue
Tomorrow, more of the same in Excalibur #22 and Friday, the long wait for Larry Hama begins in Wolverine #24. Next week, Morlock fun in Uncanny X-Men #262.