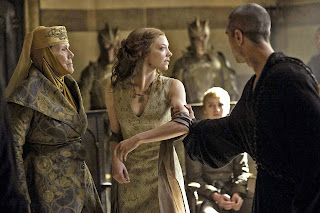 Braavos
Arya is certainly trying to forget her past entirely. It's pretty much a requirement of the Many-Faced God in order to become No One. Arya currently looks to be putting in her work without much of a fuss. Eventually she wants to play the “game” with the other girl in the House of Black and White. This girl says that Arya isn't really ready and then tells Arya the story of her life. Basically, she was a rich kid who had an evil stepmother. I'm not sure her back story is necessary to know because she then asks Arya which parts of her story were a lie, none, some or all? I wasn't sure and neither was Arya. My vote would be all, for what it's worth.

Later, Jaqen decided to play the game with Arya. At least, I think it's the game. Anyway, Jaqen asked Arya questions about her past and lashed her when he caught her in a lie. This game seems a bit rigged to me, though, because Jaqen already knows Arya's history so how can she lie to him about it? Anyway, the interesting part of this scene is Arya declares her hate for the Hound and gets whipped for it. She swears it's true but it's obvious Jaqen believes she's lying to herself.

Next a man shows up with his sickly daughter. The man has tried all medical treatments and is to the point where he just wants her suffering to end. Arya takes her to a pool of water and tells her a tale of her being sick and brought to this temple where the water healed her. She gives the daughter some water and she dies.

Jaqen thinks Arya is still not ready to be become no one but is now ready to become someone else. Ummmm...OK. I guess we'll see where that goes.

On the Road
Tyrion and Jorah are now camping buddies reminiscing on the past. More specifically, they're talking of their fathers. Tyrion brings up killing his father and then drops the bomb on Jorah that his father is also dead. Jorah is saddened but there's really no time for moping because slavers arrive!

The slaver boss wants to bring the two to Volantis. Well, he wants to bring Jorah to Volantis and wants to kill Tyrion and take his magical, dwarf cock and sell it. Tyrion convinces the slavers you need a live dwarf as proof of the cocks dwarf-ness and he also convinces them to go to Meereen since Jorah is an accomplished warrior who can be used in the fighting pits. It seems the slavers are convinced...for now.

King's Landing
In King's Landing the Faith Militant is still omnipresent. Two men's pasts are confronted. Petyr Baelish embraces his past and seems better for it. Loras hides from what he did in the past and things do not go well for him.

When Littlefinger arrives in King's Landing he is greeted by the Sparrows in the way one would think the Sparrows would greet an (ex?)brothel owner. Well, frankly, he was treated a little better than expected since Petyr Baelish still has both his life and freedom.

Petyr meets with Cersei who is worried about Littlefinger's loyalties. (NOW she's worried about them?) Baelish assures Cersei that his loyalties are with the crown, which can't be said of the Roose Bolton who is soon to marry his son off to a Stark! But, not surprisingly, Baelish has a plan. Even less surprisingly, Baelish's plan, if successful, will result in more power being ceded to him.

Petyr plans to let Stannis Baratheon and the Boltons battle over Winterfell. Then, he'll take his army and attack whoever is left. In exchange, Baelish will gain the title of Warden of the North. Cersei is hesitant until Baelish assures her that the crown and Lannisters will not be involved and that he's taking on all the risk. Cersei agrees to the plan. The rise of Petyr Baelish continues...

We're not ready to leave King's Landing just yet. We have some religious bigotry to deal with, yay! Olenna Tyrell arrives and wants Loras' release. Cersei still claims she has no control over the situation. Olenna threatens to pull all Tyrell funding from the crown but Cersei assures Olenna that there will only be a holy inquest and, when insufficient evidence is found, Loras won't face an official trial. Olenna seems to believe Cersei probably because she doesn't think Cersei would put the Tyrell funding in jeopardy. You'd THINK that, wouldn't you?

So the inquest begins and any thoughts that the High Sparrow may be a good, decent person is laid to bed as he's in charge of the inquest and seems hungry to lock up them gays. The inquest seems to be going alright at first. Loras denies all charges and there doesn't seem to be any evidence. Then Queen Margaery is asked to take the stand and we all know shenanigans are afoot.

Margaery denies knowing anything at all. Then the High Sparrow brings in the conveniently hidden Olyvar, Loras' ex-squire and lover, to testify. He admits to bumping uglies with Loras and his proof is knowledge of a birthmark high up on his thigh. He also throws Margaery under the bus by saying she saw them together.

I'm not sure why his word is greater than the queen's especially since I would assume plenty of squires have seen the people they serve naked or near naked in very much non-sexual situations. But, we all know the fix is in and that Cersei and the High Sparrow are conspiring together to take down then Tyrells. So Margaery and Loras are taken away for trial while Tommen does nothing. Way to king, Tommen, way to king.

Dorne
Trystane and Myrcella sitting in a tree, K-I-S-S-I-N-G! OK, they're in a garden. Jaime and Bronne show up disguised as guards and Jaime tries to take Myrcella back with him. But Myrcella isn't too interested in going back to King's Landing. Then the bad ass lady group, the Sand Snakes, show up and are interested in killing Myrcella.

So the Sand Snakes fight Jaime and Bronne and I'm waiting for some sort of major character death to occur but the ax-wielding captain of the guard, Areo Hotah, shows up and puts a halt to everything. Jaime, Bronne, the Sand Snakes and Ellaria are all taken away to prison. That was...anticlimactic...but I am curious how things will progress from here. They have solid evidence that Jaime was trying to steal Myrcella away but Prince Doran seems real reluctant to ruffle any feathers. So maybe he won't go to war and just send Jaime back to King's Landing?

Winterfell
Ugh, do I really have to continue with this review? I mean...do I? Alright, Ramsay Snow is a terrible person. He has Theon/Reek walk Sansa down the aisle. Ramsay marries Sansa and then forces Theon/Reek to watch as he rapes Sansa. Yay, Game of Thrones!

Other Thoughts
Rape is a complicated issue when presented in entertainment. My thoughts on it are complicated as well. If we want to discuss it on this episode that's fine, but my thinking is largely unchanged from the last time we've had to deal with rape on Game of Thrones.

I suppose one thing that makes this scene "better" than the last one is that at least the writers/producers KNOW it's rape.

That being said, a big problem with that scene, and even what lead up to it, is that the show seemed to be me more focused on Theon/Reek and what he feels/thinks about what's going on rather than its impact on Sansa.

It's also a shame that this came right after Sansa asserted her newly found strength against Myranda and her attempts to scare Sansa away.

Moving on, the High Sparrow is pretty awful, right? I mean, you could argue he's just adhering to his faith but he seems to be going out of his way to screw with the Tyrells. There was no real reason for him to hide the fact that Olyvar was at the trial to testify and there was no reason to call Queen Margaery to the stand other than to screw her over too.

Speaking of the High Sparrow and his hypocrisy, why is he letting Cersei be? Everyone knows she's involved in incest. Is that not against their religious code? You could argue he doesn't have evidence but Lancel has been a part of that incest and would never now lie about it. Does the High Sparrow seriously not know what Cersei was up to?

Also, Lancel presumably knows that Tommen isn't Robert's son and thus is on the throne illegitimately.

So, was the water Arya gave the dying girl poisoned? Was it a test? Like, the God of Many Faces may choose to save the girl or may not? Or was it just water and Arya knew the girl wasn't long for the world but wanted to give her some comfort? Probably poison...

Even in these circumstances, it's always pleasure when Olenna shows up in an episode.

Do we think Theon/Reek is breaking from his brainwashing? I thought him having to use his real name during the ceremony might have been a catalyst for him breaking out.

Tyrion: How could he know unless he sees the dwarf?
Slaver: It will be a dwarf-sized cock.
Tyrion: Guess again!

Cersei: As I said, I didn't imprison anyone. As for your veiled threats...
Olenna: What veil?