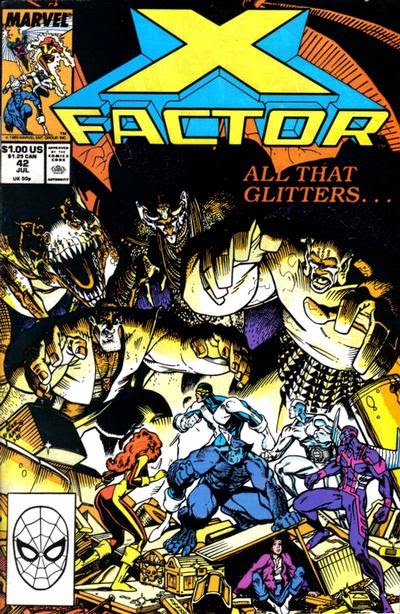 In a Nutshell
X-Factor battles the Troll Associates.

Plot
In the tunnels under London, the Troll Associates gloat over the unconscious X-Factor, then leave with Thomas Jones to enact their plan to destabilize Britain's economy. X-Factor, however, quickly regains consciousness, and easily defeats the two trolls left to guard them. Above, the trolls try to force Thomas to turn the Tower of London into gold, but when he refuses and insteads transforms a dog, wounded by one of the trolls, to gold to end his suffering, they get a better idea, and attack Buckingham Palace, demanding to see the Queen. Just then, the police arrive, and their lights and sirens scare away the trolls. As they fly off, they encounter X-Factor, who manages to force the trolls out of the sky and back into the tunnels, where Thomas yells to X-Factor that sunlight will destroy the trolls. 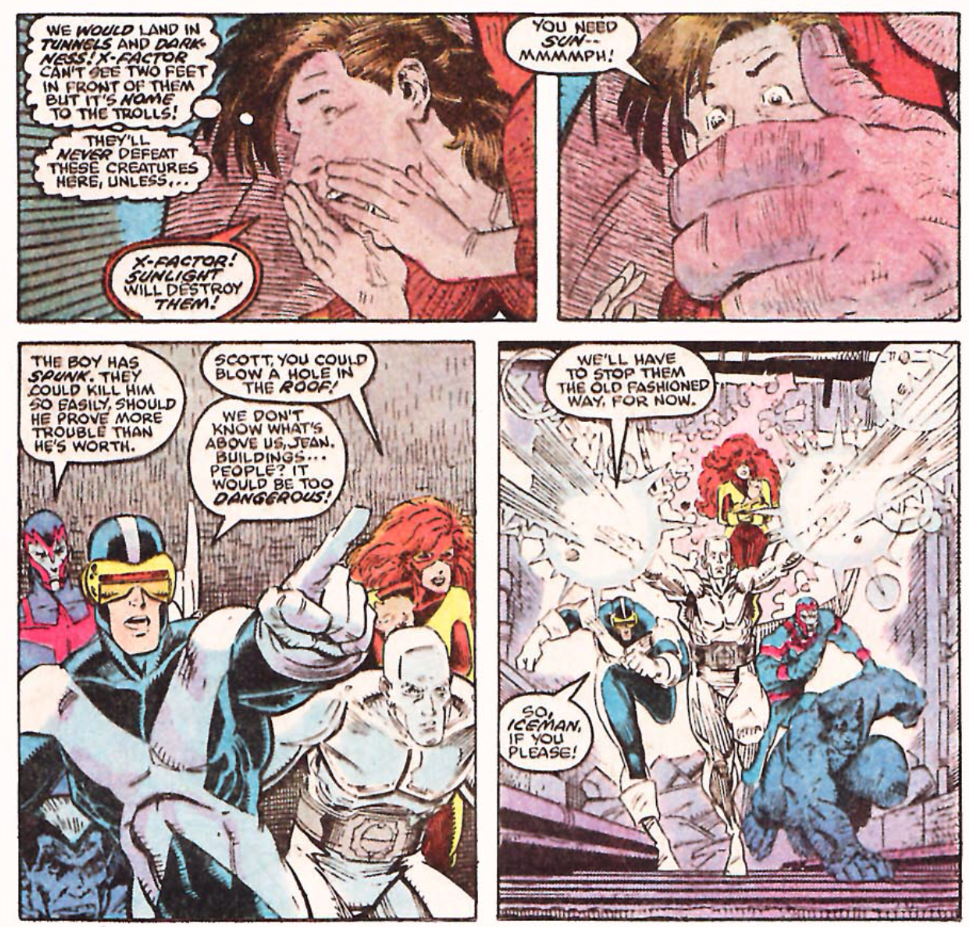 Realizing they need leverage to force Thomas to transform things into gold for them, the trolls head towards Thomas' house. Cyclops blasts a whole into the ceiling above them, but there's no sunlight due to the rainy weather. The trolls capture Thomas' mother and demand that he do their bidding and call off X-Factor, or else they'll kill her. Instead, Thomas transforms the trolls themselves into gold, freeing his mother, just as X-Factor reaches them. Thomas takes the name Alchemy and vows to go to university to become a molecular biochemist. X-Factor helps move the golden trolls out of Thomas' basement and into Hyde Park, where Thomas switches them from gold to lead. After Thomas declines an invitation to train in the use of his power with X-Factor, they depart for home. Amazed that, for once, they found a young mutant with an accepting family and relatively normal ambitions, Marvel Girl hopes that Christopher will be just as sweet and smart and normal when he grows up.

Firsts and Other Notables
Baby Christopher manifests his mutant ability for the first time in this issue, as he creates a protective telekinetic bubble around himself when one of the trolls tries to step on him. He'll occasionally generate this bubble throughout his remaining tenure in the book, and for the most part, it coincidentally fits with the later development that Christopher is Cable, as his force bubble can just be read as a basic, rudimentary manifestation of Cable's later and greater telekinetic abilities. 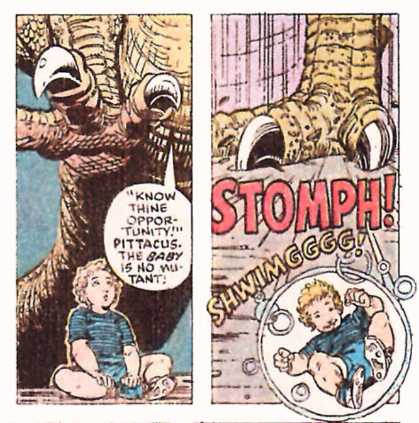 After spending most of its existence with little more than a rotating series of figure in its corner cover box, the series finally gets a full team image as of this issue, one that will (barring next issue) remain the default corner box image until Whilce Portacio takes over artistic duties with issue #63.

Thomas Jones takes the superhero name "Alchemy" this issue, though he intends to continue his studies and go to university, focusing on becoming a scientist rather than a superhero. In a nice bit of characterization, especially for what is essentially a one-off character who never really does much beyond this issue, he vows to learn how to use his powers so that one day he can eventually restore the trolls he transformed to flesh-and-blood. 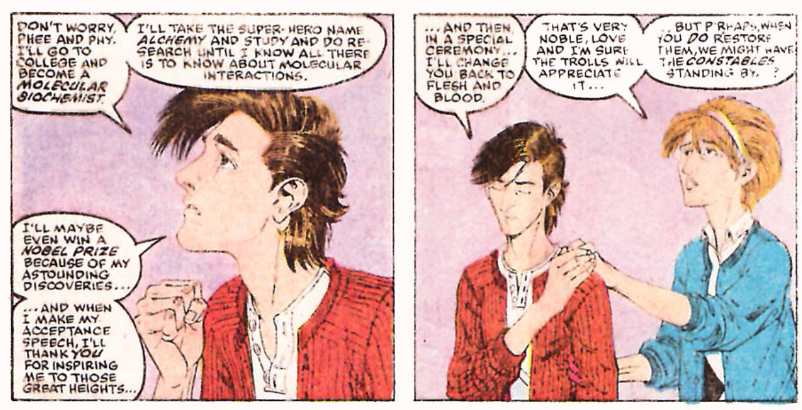 A Work in Progress
One of the cliffhanger elements of last issue's ending was that Marvel Girl didn't know where Christopher was; as this issue opens, all of X-Factor is unconscious, and Christopher is right there on the floor next to Marvel Girl. 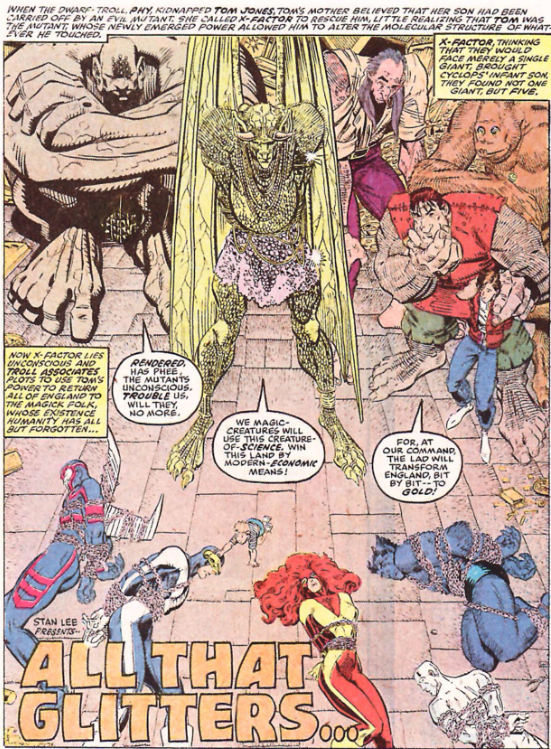 The trolls nearly have Alchemy turn the Tower of London into gold, which is funny simply because, based on publication times, Excalibur is at the Tower battling their alternate reality Nazi counterparts around this time.

Speaking of Excalibur, one of the royal guards tells someone to call them for help when the trolls attack Buckingham Palace, a nice acknowledgement of the existence of the "British X-Men", even if they don't actually show up in the story.

Beast says that X-Factor has a school for young mutants learning to use their powers, which seems like a generous (if appropriately shorthanded) description of X-Factor's training regimen as depicted thus far, especially since their expanded charges only showed up as of last issue.

X-Factor comments on how unique it is for Alchemy to be given a shot at a normal life, despite being a teenaged mutant, and Marvel Girl says she hopes Christopher gets the same chance (cue sad trombone). 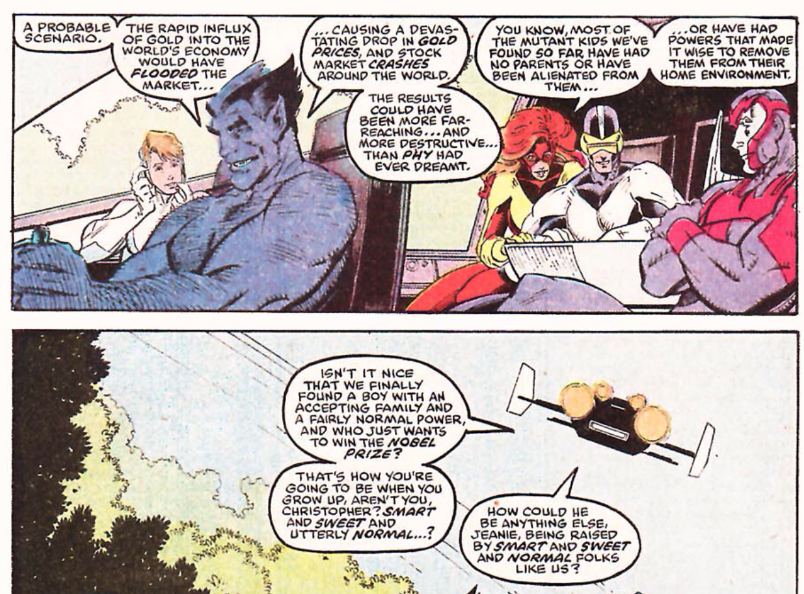 Artistic Achievements
Putting aside for the moment the continued-ridiculousness of X-Factor having brought the baby along with them to fight trolls in London, Art Adams does a masterful job of making sure Christopher doesn't get lost in the shuffle visually, being careful to draw him in someone's arms at various points in the story to ensure he's moving from place-to-place with the rest of the team and not just randomly showing up amongst them at the end. It's a detail lesser artists would be likely to overlook.

It's in the Mail
In this issue's letter column, someone asks if Archangel's costume comes off. The response is "we sure hope it comes off!", which is the kind of cheeky response to a legitimate question that always bugged me as a kid (because it makes it clear they have no idea and haven't bothered to come up with a proper answer).

It's also established that the pink bubbles that show up whenever Marvel Girl uses her telekinesis are meant to represent the invisible force and aren't seen by anyone within the comic (like Invisible Woman's dotted silhouettes), a note I greatly appreciated as a kid, as I often wondered the same thing.

Teebore's Take
Well, that wraps up this Troll Associates/Alchemy two-parter about as perfunctorily as possible. Again, there's certainly some charm in seeing the winner of Mutant Registration contest, and this issue is mildly notable for establishing that baby Christopher is already manifesting some kind of mutant ability, but without the status quo building/character interactions from the first half of last issue, everything else here is just stock standard superheroics as X-Factor battles a group of bland villains. Once again, Art Adams is at least on hand to make this all look good (certainly better than the story deserves) and keep it from being entirely forgettable. Even then, Adams is only barely able to accomplish that.