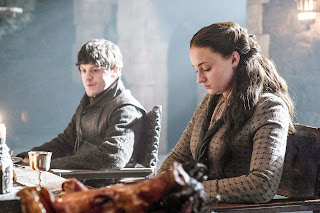 “Kill the boy and let the man live.” Or girl/woman, depending on the characters. This episode was filled with characters having to make some tough decisions and having to grow up. It also had gray scale zombie-people. So there's that too.

Meereen
Daenerys needs to become more than just a woman, she must become a queen. Having dragons has made gaining that title relatively easy for her. But now that she is a queen, she's learning the difficulties of having to be a ruler.

The Sons of the Harpies have risen up and attacked. Grey Worm managed to survive the attack. Ser Barristan has not. Daenerys is understandably pissed.

Daenerys is given two suggestions. One suggestion is to fortify the pyramid district and then gradually move outward, cleansing the city as they go. The other suggestion is to gather the heads of the households and scare the ever-loving crap out of them. Remember when I said Daenerys was pissed? Yeah, she chose the latter option.

Later, Daenerys seems to be thinking a bit clearer but has no idea what the right course of action is. Ruling with an iron fist isn't always the best policy, especially when your policies are based on respect for all human life. Beating open-mindedness into people rarely, if ever, works. So Daenerys has a decision to make.

What does Daenerys decide to do? She decides to extend olive branches to the people. The first olive branch, to the surprise of no one, is finally opening the fighting pits to free men. The second olive branch is a bit more surprising. To solidify her bond to the people of Meereen and their history, she offers to wed Hizdahr zo Loraq.

Winterfell
Well, we've been seeing Sansa having to grow into a woman all last season and this season. Now she faces her biggest challenge yet. She has to marry Ramsay Bolton. Sansa's not alone, though, since Brienne manages to get her a message that she should hang a lantern on the highest tower should the redcoats ever invade...er...should she ever be in trouble. Sansa seems to seriously consider this option right away.

Ramsay is also trying to grow. He's transitioning from a Snow to a Bolton. Unfortunately, after hearing Roose talk about Ramsay's mother's conception (raped by Roose underneath the hanging corpse of her husband) we realize that that Ramsay's transition might not be a difficult one.

Ramsay's...er...girlfriend?...Myranda is none too pleased about his impending marriage to Sansa. So Myranda shows Sansa Reek/Theon. I assume her endgame is to scare Sansa away or something but it's not like Sansa isn't already scared or as if she's marrying Ramsay by choice.

Anyway, this all leads to an uncomfortable dinner where Reek/Theon serves the Boltons and Sansa. Ramsay forces Reek/Theon to apologize to Sansa for killing her brothers. I'm not sure if Ramsay genuinely thinks this is a kind gesture for Sansa or if he just wants to make her as uncomfortable as possible. Hell, he probably doesn't even know.

After all that, Roose gives Sansa the only tiny bit of happiness she has had in a good long while. He announces that his wife, Walda, is pregnant and he's sure it's a boy. Ramsay is immediately threatened but Roose assures Ramsay that he's now his son too. They bond over planning for the impending attack by Stannis' army.

The Wall
Speaking of Stannis, he's still at the Wall preparing to march on Winterfell. But first we see Samwell Tarly reading about the exploits of Daenerys to Maester Aemon who, being the only(?) living relation to Daenerys, regrets he's not there to guide her. Jon Snow then enters to talk to Maester Aemon. Jon laments the fact that he knows what he wants to do but fears many will hate him for doing it. Maester Aemon's advice? “Kill the boy and let the man live.” Of course!

So, with that, Jon Snow becomes a man and frees Tormund Giantsbane. The Wildlings will be allowed to settle south of the Wall provided they aid the Night's Watch in the battle against the white walkers. The catch? Jon has to go north of the Wall and talk to the Wildlings. When Jon discusses this plan with the rest of the Night's Watch it goes over about as well as you'd expect. Which is to say, not well, not well at all. But, unsurprisingly, Jon Snow is resolute in his decision.

Meanwhile, Gilly and Sam talk about books and Westeros and have a decidedly Gilly/Sam conversation. Stannis Baratheon barges in and recognizes Sam. He lauds Sam's father for being a great tactician. Apparently, he's the only man to have bested Robert Baratheon during the war.

Stannis then questions Sam about his killing of the white walker. In Stannis' ever increasing attempts at making me like him, he takes everything Sam says to heart and tells Sam to keep on reading. It also seems like he's planning on trying to gather a giant stash of dragonglass.

With that, Stannis is off to Winterfell with his wife, child and mystic mistress is tow. Ser Davos suggests waiting to march until the Wildings arrive but Stannis won't hear of it. I'm sure that won't bite him in the ass.

Valyria
Jorah is still headed towards Meereen. Tyrion is still captive. Jorah decides to take a shortcut through Valyria. Normally I'd be all for shortcuts in Game of Thrones (we could use more of them!) but Valyria looks pretty ominous.

Valyria is a ruined stone city in a forest. Jorah and Tyrion bond over discussing the great city that suddenly wasn't. Their bonding is cut short by a sighting of Daenerys' lost dragon. Then it's further interrupted by people who have undergone a metamorphosis of their own. Unfortunately, these aren't people who have grown from child to adult. Instead, they're insane people completely consumed by gray scale.

Jorah tries to fend them off. Tyrion tries to get free of his bindingss only to fall into the water. After a very suspenseful blackout, we find Tyrion alive on a beach saved by Jorah. Tyrion thanks Jorah as he walks off to find firewood. Alone, Jorah dramatically rolls up his sleeve reveals to the audience that he has been bitten by a zombie! Er, sorry, I mean, he is now infected with gray scale!

Other Thoughts
Since Tyrion is across the narrow sea, him talking about Daenerys doesn't seem odd. But when someone in Westeros, like Sam, talks about her it always seems weird to me.

Jon Snow did have a good point that letting the Wildlings die North of the wall only servers to make the army of the undead stronger.

Are there any people more loyal than Northerners? They sure love their Starks!

I'm not sure what made Sansa think it was wise to walk down a dark, creepy kennel at the request of a strange woman. Frankly, finding Reek was the best possible outcome!

It's interesting how cold and unwelcoming the castle at Winterfell always seems but, really, it is Sansa's home. I guess it even feels unwelcoming to her at the moment.

Roose Bolton seems positive he's having a boy. Is the maester who told him just using fake medical expertise or does Westeros have some sort of magic/science that accurately predicts the sex of a child before it's born?

Ramsay feels threatened by the unborn boy but maybe he shouldn't make a better alternative than him such a low bar to clear.

I'm really starting to like Stannis and am really hoping he conquers Winterfell and gives the Boltons what they have coming. Of course, this certainly means Stannis' assault is doomed to fail.

Frankly, I'm more upset by what Jorah contracting gray scale means for Tyrion than what it means for Jorah.

Night's Watch Man Whose Name I Don't Know: Let them die. We have our own to worry about. Less enemies for us!
Stannis: Fewer.
Davos: What?
Stannis: Nothing...

Tyrion: I am a person who drinks! People who drink need to keep drinking. Otherwise, they're not...