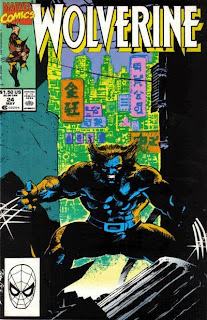 In a Nutshell
Wolverine battles the super-powered assassin, Snow Queen.

Plot
The Snow Queen prepares to carry out her latest hit, emerging onto the streets of Madripoor carrying a bomb inside a suitcase. However, a local thief named Aldo quickly grabs the case from her and runs off. Snow Queen pursues him, drawing the attention of a fellow street urchin named Rose, who calls for help, attracting Wolverine's attention. Smelling the fear on the girl, he sets about tracking down the Snow Queen. As Aldo hides from Snow Queen, he inadvertently activates the bomb's timer, while Wolverine catches up to the woman. She uses her power on him, overwhelming his senses so she can escape. Later, Wolverine gets a drink from a bartender who is, coincidentally, Snow Queen's target, and he suggests Wolverine seek out Ganif, the mentor of the city's young thieves. 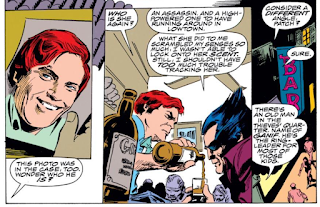 As Snow Queen captures Rose, forcing her to take the Snow Queen to Aldo, Wolverine convinces Ganif to give him one of Aldo's headbands, so he can track the boy. The Snow Queen and Wolverine converge on Aldo, and though Snow Queen overwhelms Wolverine's senses again, he manages to overcome the disorientation and slash her arm, causing Rose to be shot by mistake. As Wolverine and Aldo tend to Rose, Snow Queen runs off with the briefcase. A few blocks away, she opens it, just as the timer reaches zero. Wolverine, Aldo and Rose spot the ensuing explosion and realize the Snow Queen is gone.

Firsts and Other Notables
This issue marks the first and last appearance of the Snow Queen, a highly-trained Dutch assassin with the power to cause sensory "white noise" in people around her. Wolverine remembers her from his days with Canadian intelligence. 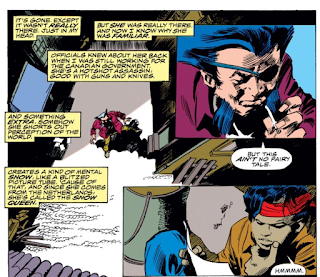 Peter David and Gene Colan return to the series, after their similar fill-in work on issue #9.

Jim Lee provides the cover for this issue, the first of a few he'll do as his dominance over the X-books continues.

Per the GCD, the Statement of Ownership in this issue lists the average number of copies of each issue during the preceding twelve months at 480,653, with the single issue nearest to filing date selling 440,025 copies.

A Work in Progress
Wolverine is still using the Patch identity in this story, though he does use his claws despite trying to keep them under wraps.

The Reference Section
Wolverine mentions Ben Casey, the doctor from Ben Casey which was previously referenced in a far more contemporaneous issue of X-Men back in the Silver Age (also, I'm not entirely sure you can or should apply a tourniquet to a shoulder wound). 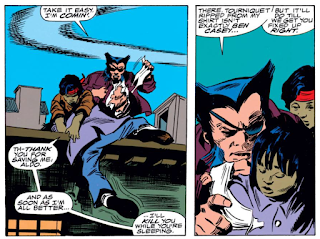 The Best There is at What He Does
The Snow Queen causes Wolverine to go nuts when she uses her power, as he tends to freakout whenever his senses are impaired. 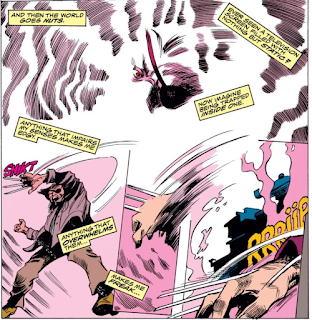 Teebore's Take
And we're back to done-in-one fill-in issues. Granted, having Peter David and Gene Colan return, following their previous such story in issue #9, lends a little bit of creative continuity between the two otherwise unrelated fill-ins, and Colan's moody, expressive art once again suits the story well. Otherwise, this is a mostly forgettable story involving yet another "one timer" villain Wolverine has heard of but never mentioned before (and won't mention again). The Snow Queen has an interesting power (albeit one highly suited for attacking one of Wolverine's few weaknesses) and the attempt to mimic fairy tale cadences with the narration is cute, but there's really nothing about the story that takes advantage of the setting (the Dickensian gang of child thieves certainly aren't exclusive to Madripoor) or adds much to the title character. Nothing here is offensively bad, but nothing is terribly memorable, either.

Next Issue
Next week, the Morlocks make their move in Uncanny X-Men #262, the New Mutants get new uniforms in New Mutants #90, and Beast is reunited with an old friend in X-Factor #55.