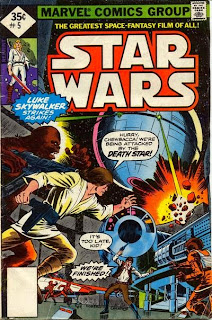 In a Nutshell
The Rebels prepare for their assault on the Death Star.

Plot
As the Millennium Falcon speeds away from the Death Star, Han and Luke man the ship's gun turrets to fight off the pursuing Imperial TIE fighters. However, their escape is all part of Darth Vader's plan to have them reveal the location of the Rebel base via the homing beacon he hid on the Falcon. Leia suspects as much, and only hopes that the information in Artoo will reveal a weakness in the Death Star. After the ship arrives at the Rebel base on the fourth moon of Yavin, the data is analyzed and General Dodonna briefs the Rebel pilots on their mission: to destroy the Death Star, they'll need to fire a proton torpedo at a small target while flying at maximum speed. 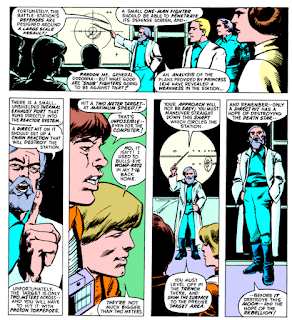 Most are incredulous, but Luke insists it can be done. Later, as the pilots prepare for the attack, Luke is disappointed to see that Han, having received his reward for rescuing Leia, is preparing to leave. Heading to his ship, Luke says goodbye to Leia, then runs into his old friend Biggs, who vouches for Luke's flying abilities to their squad leader. With Artoo as his co-pilot, Luke flies into space with the rest of the Rebel fleet to attack the Death Star, now only a half hour away from destroying the Rebels once and for all.

Firsts and Other Notables
This telling of the story contains both of the notable pre-Death Star attack scenes that were cut from various versions of the film: Luke and Biggs' reunion, which was cut from the original film but reinserted for the Special Edition, and Luke's squad leader telling Luke he knew his father, which was in the original version of the movie, but was cut in favor of the Biggs scene in the Special Edition because it didn't quite gel with the later revelation about Darth Vader (though I've never thought the scene was as problematic as Lucas did; there's no reason this older pilot couldn't have flown with Anakin at some point during the Clone Wars, even if he's not a clone himself). 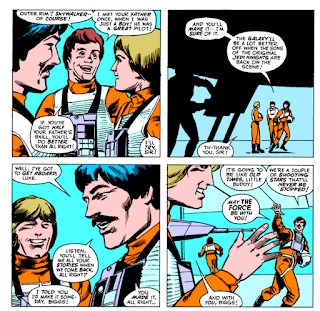 General Dodonna, the Rebel officer in charge of the base on Yavin Four, appears for the first time. He's popped up again recently in Marvel's current Star Wars comics, though in the old Expanded Universe he was said to have been captured by the Imperials fleeing Yavin after the destruction of the Death Star (which was likely an attempt to explain his absence from subsequent films) and placed in a prison camp that was actually an underground Super Star Destroyer.

We get our first look at a TIE Fighter Pilot in this issue, though he looks a bit different than what appears in the film (though still relatively close). 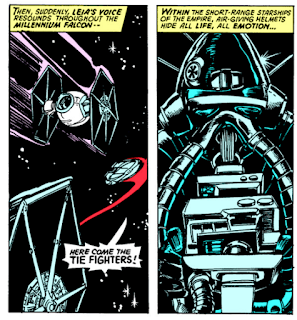 Dave Cockrum, who had just ended his first run on X-Men when this issue was on sale, inks the cover.

A Work in Progress
Thomas offers up his take on the Force in this issue. 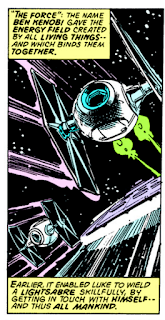 The narration refers to Han as a space-mercenary, which makes me think it should do that for everyone in the Star Wars universe (space-princess!, space-mailman, space-accountant). 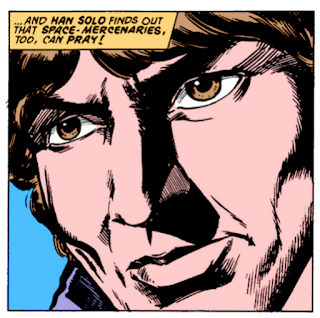 Thomas is still putting quotes around "the Force", but he's also starting to drop them at times.

Um, Actually
The cockpit of the Millennium Falcon as depicted in this issue is quite a bit larger than it appears in both the film and previous issues of this series. 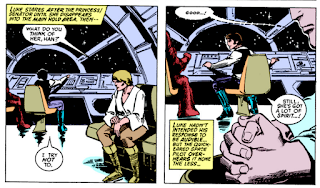 Luke is a part of the Blue X-Wing squad, not the Red squad as in the film, a common difference that pops up in a lot of Star Wars adaptations (the novelization has the same problem).

You Kiss Your Sister With That Mouth?
Luke and Leia kiss again, and once more, it's render far more sweepingly-romantic than we'd like, given hindsight. 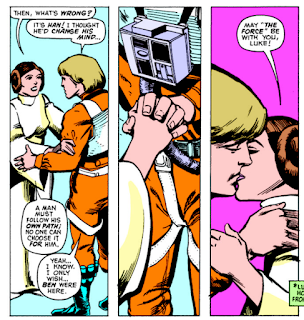 Teebore's Take
While Roy Thomas was undoubtedly right to push Marvel to keep this adaptation a full six issues instead of two, breaking the story down into six separate chapters still runs the risk of creating at least one low key chapter in which not a lot happens. This issue, then, is that chapter. After the initial escape from the pursuing TIE Fighters (in which Thomas deftly uses narrative captions to increase the stakes, as Luke's failure to destroy the final ship will result in the destruction of Leia and Chewbacca due to powerless shields), not a whole lot happens.

It's the classic trap of the penultimate chapter, in which so much time has to be handed over to setting up the subsequent finale that the chapter itself doesn't really stand on its own. Just as in the film, there's a nice amping up of tension at the end as the Rebel fleet flies out to meet the Death Star, knowing failure will mean their deaths and the deaths of everyone in the Rebel base, but unlike the film, reading this story chapter by chapter in comic form, the narrative stops at that point, holding all the really cool stuff for next issue. It's a great way to draw out the tension and hook readers for the finale, but it leaves this issue, as a singular entity, somewhat lacking.

Next Issue
Luke vs. the Death Star!