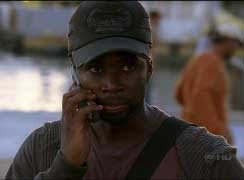 So Michael’s going to redeem himself for killing two people by…killing a lot more people? Okay, that’s simplifying things a bit, but he’s managed to drop himself right back into a morally complex “ends justify the means” quagmire.

Meet Kevin Johnson fills in, for the most part, what happened to Michael after he and Walt puttered away from the Pala Ferry at the end of season two. In a uniquely uninterrupted flashback (I think only Desmond’s story in Flashes Before Your Eyes similarly didn't cut back and forth between narratives) we see Michael, suicidal over having killed killing Ana-Lucia and Libby and the estrangement from his son that his confession of that act produced, get visited by a dapper Tom in Manhattan and told the island won’t let him die because he still has work to do. That work involves infiltrating the freighter, bound for the island in order to wipe out his fellow Oceanic survivors (so Michael is told), and wreaking havoc, first as an assassin and then as a saboteur.

The revelation that the island somehow has the ability to prevent suicide has implications that reverberate back through several episodes. When Jack was about to leap from the bridge at the beginning of the very first flash forward, was that his first suicide attempt, or one of many aborted tries? Was the car crash that drew his attention away from cordless bungee jumping the island’s way of stopping Jack’s death, because Jack “has to go baaack?” Was Kelvin’s partner Razinsky’s suicide (recalled in last week’s episode by the blood splatter on the wall of Desmond and Sayid’s cabin) “allowed” because he wasn’t “in tune” with the island, or because his “work” was done? The obituary for the mysterious person in the coffin that Jack visited in his flash forward listed suicide as the cause of death; if that person (and I’m even more sure now than ever that it was Michael) was on the island, is their “work done?”

As if to counter the claim made last week by Captain Gault that Ben is behind the faking of the Oceanic 815 wreckage, this week we see Ben’s side of the story, along with some compelling (but not airtight) evidence that it was Widmore who faked the wreckage. The line is clearly drawn and these two men are obviously standing across it from one another, but it still isn’t clear which one is the good guy and which one is the bad guy, if either is truly “good.” Both men have been shown to be capable of tremendous evil, but my inclination (and I assume a good portion of the audience’s) is to side with Ben, perhaps because we know him better and have seen his (slightly less evil) human side, or maybe just because his brand of evil seems more elegant and cerebral than Widmore’s brutal tactics, condescending nature, and gleeful Hired Goons, and thus, easier for us to accept. 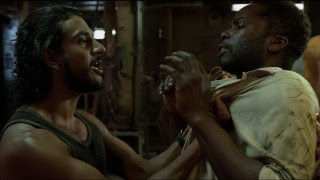 Which made Sayid’s unflinching outing of Michael to the captain a cringe-worthy moment, at least to me. But Sayid has been given no real indication that the surprisingly forthright captain is less than trustworthy, besides a note he assumes came from Michael. Sayid has never been anything other than completely distrustful of Ben, and finding out Michael is working for Ben would only give Sayid more cause to distrust a man who murdered two people and sold out his friends. And there is, of course, the dramatic irony that Sayid is enraged by Michael working for Ben when in the not-too-distant future, Sayid will be doing the same thing. But before applauding or demonizing Sayid for his actions, consider two things: we have received confirmation that Michael is Ben’s man on the boat and that Michael was the saboteur. We are assuming that he is also the person opening doors and passing notes to Sayid and Desmond, but another person could be responsible for that. Also, when Sayid exchanged Miles for Charlotte, in the same episode in which we discover Sayid works for Ben in the future, Sayid spent time with Ben in the game room and the contents of their conversation remain unknown to the audience. Perhaps Ben told Sayid about Michael, and Sayid exposing Michael to the captain is yet another component of Ben’s convoluted plan, a component Michael is unaware of and a plan Ben managed to sell Sayid on during their discussion together.

Highlight
Miles: We're here for him (indicates Ben).
Hurley: Um, we kind of, like, knew that forever ago.

And then Ben’s nonchalant announcement that Michael is his spy on the boat.

Did You Notice?
Tom’s gay. 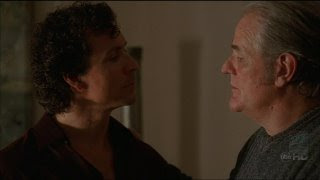 I don’t know what weird game show was on Michael’s TV when he tried to blow his mind, but the answer to the question was “Vonnegut”, author of Slaughterhouse-Five, which was referenced in Desmond’s episode this season.

Michael pawned the watch he and Jin fought over in the first season.

Maybe I’m imagining things, or maybe it can be chalked up to Michael’s ineffective flailing about, but it seemed like when they were fighting in the alley, Tom displayed some of the almost-superhuman fighting moves that Ethan (and sometimes Juliet) seemed to display from time to time.

Tom tells Michael he still has work to do, which is what Taller Ghost Walt told Locke when he was lying in the open grave.

Michael was wearing his hood up, just like Charlie did when he relapsed into druggie “Darth Charlie" mode.

My memory is fuzzy on this, so I could be wrong, but I think Tom listed off the Oceanic Six as the people who would die unless Michael did something. Could just be coincidence, or maybe the Six getting off the island are part of Ben’s overall plan, an attempt to open a second front in his war against Widmore, if you will, and he already has one his infamous lists prepared for who gets to leave as part of that plan.

Minkowski alluded to Nicholson in the Shining when Michael was bouncing the ball off the wall of his cabin; I thought of Steve McQueen in the Great Escape.

Michael’s off-island story wasn’t a flash forward, but it continued the almost universal portrayal of post-island life as something sad, heartbreaking, unfulfilling and/or suicidal, found in most of the flash forwards.

Guns served as Michael’s motivation twice in this episode: the failure of his pistol to fire convinced him of Tom’s claim that the island wouldn’t let him die and watching Kearmy and the other Hired Goons gleefully fire off their assault rifles later convinced him that Ben and Co. were right about the nefarious intentions of the freighter.

The irony that Michael’s actions to get back Walt (killing Ana-Lucia and Libby) later caused him to lose Walt all over again, once he confessed to him.
Questions
Who shot Rousseau and Karl?

Rousseau? Really? There seems like she has a lot more story to tell. And the producers told us we’d get a Rousseau flashback at some point. I didn’t see any blood-maybe she’s just stunned or something. Here’s hoping…

How does the island not let Michael kill himself? Is it literal or figurative? Did it prevent Jack from doing the same?

Was that Malcolm David Kelley in the window when Michael looked up? There seems to be some disagreement as to whether or not it was a new actor. Personally, it looked like “correctly aged” Walt, so I think it was probably a CG image inserted over an actor. The producers have long said that Walt is coming back, and that the factored in that the actor would age faster than the character when planning his character’s arc. Some are now speculating that if this was a new actor, then perhaps that was all BS or they’ve abandoned that plan. 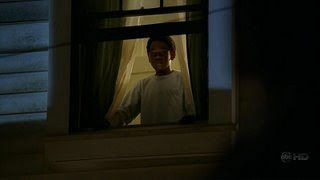 Michael’s timeline seems a bit fuzzy to me. According to Lostpedia, Michael and Walt left the island 67 days after the crash. The Others left the Hydra station during season three on Day 74, so Tom would be accounted for until then. He next reappears on Day 80 playing football with Jack and is seen with the other Others until his death at Sawyer’s hands on Day 93 (the end of season three). So he would have traveled to New York and met Michael between days 74 and 80, which means Michael left the island, made it to New York, grew despondent, tried to kill himself, was injured to the extent that he needed a neck brace, healed, then tried to kill himself in the alley before meeting Tom in roughly ten days? That seems like a lot of things happening in ten days. Even if Tom went to New York during the Day 80-Day 93 span (I don’t think we saw him every one of those days) that gives Michael maybe twenty days tops to do all that. But also consider that Naomi arrived on the island on day 87, so assuming it took 2-3 days for the freighter to leave Fiji and get within helicopter range of the island, Michael would have had to be in Fiji on Day 85 at the latest, which means everything that happened to him, including meeting Tom, took place in 18 days. That still seems like a lot of stuff to happen in under three weeks, especially the "healing from his failed suicide" part. We know there is something screwy going on with time; are we supposed to chalk all this up to that, or are we just not supposed to be thinking about this?

How did Michael and Walt get from small boat leaving the island to living in New York?

We can (probably) chalk up the Libby that Michael saw in the hospital to his guilt/medicine, but how about the Libby that appeared on the freighter? Was that Smokey? If so, what are the implications that it didn’t want Michael to do something Ben, the self-proclaimed prophet of the island, wanted done? 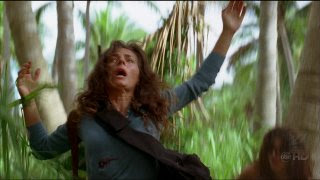