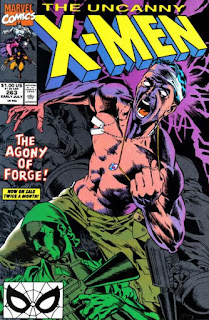 Plot
In the Morlock Tunnels, Forge and Marvel Girl, her arms still a seething mass of tentacles thanks to Masque, are alerted to activity by a recon drone created and sent by Forge to scout the tunnels. They watch as the captive Peter Nicholas and Callisto are transformed by Masque, Peter into a facsimile of Colossus' armored form and Callisto into her old, scarred self. Masque then tells Callisto she has an hour to get Peter to the surface before the Morlocks hunt them down. Meanwhile, Val Cooper meets with Russian intelligence officer Colonel Vazhin at a nightclub in Washington DC, and they discuss the state of mutant affairs and the danger they pose to humanity. 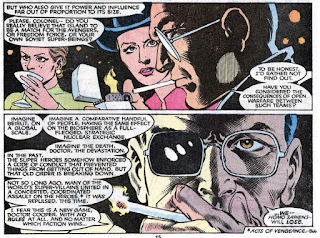 Back in the tunnels, Forge, Marvel Girl and a mouth-less Banshee track Peter and Callisto. The three groups collide just as Masque stabs Peter with a knife, but Peter strangely finds himself unharmed. After the most of the Morlocks are defeated, Peter grabs Masque by the throat, demanding he set them all free in exchange for Masque's life, and Masque orders Peter, Callisto and the X-Men teleported to the surface. Later, at Peter's loft, Banshee and Marvel Girl, restored to their normal forms by Forge, discuss whether or not they should try to bring Peter back to the life of a superhero, while on the roof, Forge pays tribute to his old Vietnam unit, thankful that this time, he was able to bring his people home safely.

Firsts and Other Notables
Thankfully, Mouthless Banshee and Tentacle Jean Grey are restored to normal at the end of the issue, thanks to Forge having taken a sample of their genetic template in the previous issue when he inoculated them, then building a device throughout this issue which uses that template to overwrite Masque's changes. 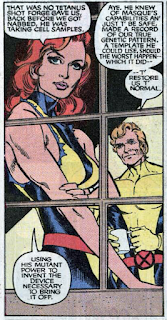 Val Cooper meets with Colonel Vazhin, the Russian version of Nick Fury (whom we last saw on X-Men #194), in a scene that is mostly setup for the upcoming but ultimately aborted "Mutant War" storyline, but still works (for the most part) as foreshadowing for what we do eventually get.

This issue confirms that the supermodel with whom Peter Nicholas has been obsessed over the last few issues is indeed Callisto, her look transformed by Masque such that it periodically reverts to her original form (which is a new use of Masque's power). 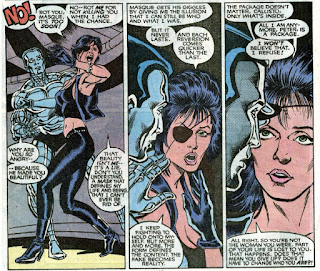 The series returns to bi-weekly shipping for the summer of 1990 with this issue, the third and final summer in which an extra three issues of the series is produced. It unfortunately coincides with a time when the series is between artists, awaiting the arrival of Jim Lee, and as a result, stretches out what would have otherwise been a brief transitional period into a full blown run of sub-par, rotating fill-in art.

To wit, Bill Jaaska picks up the penciling baton from Kieron Dwyer, and he will return to draw issue #265 as well.

A Work in Progress
Forge suggests that the Reavers are worse than the Marauders, which seems a bit like telling rather than showing given what the Marauders have accomplished relative to the Reavers, at this point.

Forge asks Jean how her telepathic powers are holding up, which seems like a typo given that she talks about telekinesis. 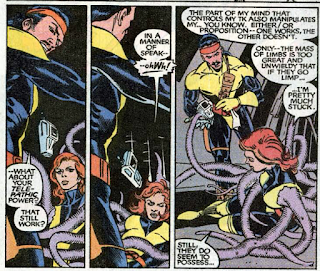 Masque is shown sans hood throughout this issue, the first time he's been so depicted. I'm not a huge fan of the "crazy old man in a pimp jacket" look Jaaska gives him here. 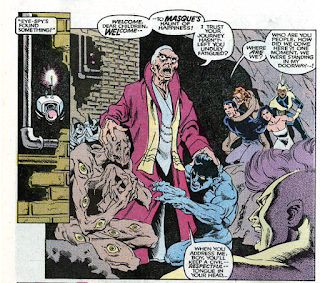 Masque believes Peter Nicholas to simply resemble Colossus, believing that the real deal is dead, and transforms his flesh to resemble Colossus armored form. The footnote pertaining to the death of the X-Men incorrectly notes issue #243 (the end of "Inferno"), not #227 (the end of "Fall of the Mutants", when the X-Men actually "died"). 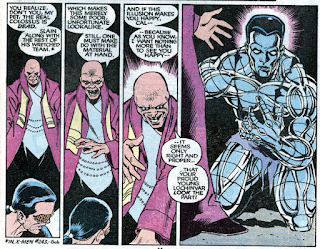 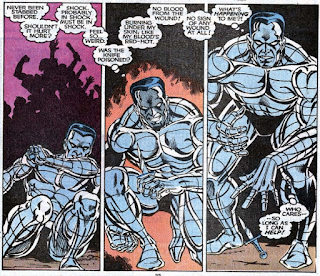 The Grim 'n' Gritty 90s
Colonel Vazhin notes that the "old order' is breaking down, with heroes and villains no longer playing by the usual rules, which doubles as a bit of fourth wall breaking commentary on the changes affecting superheroes comics, now and deeper into the 90s.

For Sale
There's an ad for the Nintendo X-Men video game in this issue, one of the worst games I've ever played. 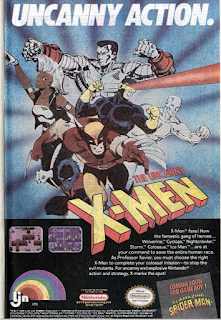 We also get another Dick Tracy ad. 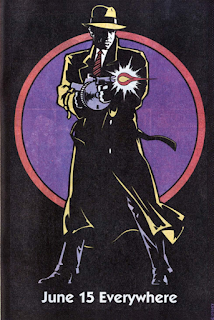 Bullpen Bulletins
With the upcoming release of the original Captain America and Punisher movies, there's much excitement about the idea of TWO Marvel movies coming out in the same year. If they could see us now... 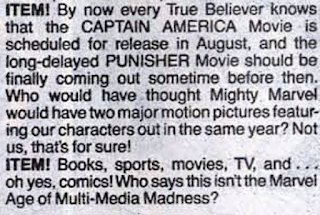 Teebore's Take
So, I really don't like Tentacle Jean Grey.

Superheroes comics thrive on the suspension of disbelief: that a man can fly, that a traumatized orphan could become the world's greatest detective, that radiation delivered in the right way will give someone superpowers instead of a slow death by cancer. There's an implicit agreement between the audience and the creators: you entertain us, we'll look the other way when it comes to some of the more illogical elements of your story.

But everyone has their breaking point, the thing that shatters their suspension of disbelief and takes them out of the story. A real world detail, like the layout of a street or a flagrant scientific error, carelessly gotten wrong without serving the story, a new superpower that strains credibility, destruction on a scale that failure to comment on it in-story becomes ludicrous. For whatever reason, when it comes to the X-Men, Tentacle Jean Grey is that breaking point for me. I'm fine with the idea of mutants in general, of Cyclops not knocking his own head off when he uses his powers or the definition of "magnetic" being applied liberally in regards to Magneto. I'm even fine with the idea of a Morlock who can mold flesh like so much clay, even to the point that he can mold said flesh to perfectly resemble the face of another. But ask me to buy that he can also replace someone's arms with a mass of writhing purple tentacles with a psychic connection to their owner? Nope, that's it, I'm done. Tapping out.

In the grand scheme of things, of course, Tentacle Jean Grey is not that big a deal. Claremont will trot out this idea again, briefly, much later with another character (he, apparently, really likes the idea, God only knows why; physical transformation in general certainly is one of his pet ideas), but it's not like this is even a semi-permanent change for the character: it's pretty much over and done in one issue. And it is admittedly kinda creepy, a disconcerting change for the character, heightened by the (probably unintentional) dead-eyed look Jaaska gives Jean throughout the issue.

But my distaste for Jean Grey being given a bunch of tentacles in place of her arms by Masque still colors my reaction to this two-part Morlock story overall, as well as this whole little mini era of rotating artists and hopscotching narrative focus. Maybe if this issue were stronger, something more than a weak attempt to artificially pump up the danger of fighting a bunch of loser Morlocks by comparing the experience to Forge's time in Vietnam via mostly generic flashbacks, I could get over my tentacle hangup, but as it is, it's hard for me to enjoy this issue at all, and to escape the feeling that Tentacle Jean Grey is representative of a rare and brief, period in time where Claremont seems particularly unfocused and off his game.

Next Issue
Tomorrow, the New Mutants take a crack at the Morlocks in New Mutants #91. Friday, X-Factor runs afoul of the Ravens in X-Factor #56. Next week, the Genoshans attack in Uncanny X-Men #264.