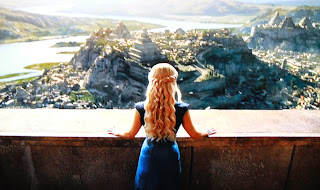 Grey Worm sneaks into Meereen and knows exactly where to go to find a meeting of slaves conveniently discussing whether or not they should rise up against their masters. The slaves are skeptical an uprising will work but are less skeptical after receiving a bunch of swords from Grey Worm. The slaves revolt and the masters are left wondering how their lifelong practice of enslaving, abusing and angering people for their own personal convenience could have possibly backfired.

Daenerys looks over her newly conquered Meereen as the surviving masters are rounded up. Daenerys reminds everybody of the child slaves nailed to mile markers. Jorah advises mercy but Daenerys is all, “Screw mercy. Eye for an eye, bitches!” And with that the masters get nailed (and not in the good way).

Cersei is pissed. Cersei is an idiot. She still thinks Tyrion killed Joffrey and is upset Jaime visited him. Jaime tries to convince her that Tyrion is innocent but, again, Cersei is an idiot. Cersei asks Jaime if he'd hunt down Sansa and bring her Sansa's head. Because it's so obvious Sansa had a role in Joffrey's death. I mean, when I think of Sansa one of the first things I think of is criminal mastermind. I don't think Jaime accepted the task of beheading a young girl but I don't see why not. Why not add one more conflicting oath to your growing list?

Margaery and Olenna are talking the art of seduction. Although, I wouldn't think Margaery needs much advice in that area. All Margaery needs to do to seduce a man is be in the same room, right?

Olenna thinks Margaery needs to get her claws into Tommen early before Cersei poisons him against her. Olenna talks about how she used her sexual prowess to get the man who was supposed to marry her sister to propose to her. Oh, and Olenna totally admits to being a part of the plot to kill Joffrey. So there's that.

So Margaery has a little midnight rendezvous with Tommen. It doesn't get as steamy as I first thought it would. She really just tells him they are to be married, that they should get to know each other and then leaves him with a kiss on the forehead. However, I'm still pretty sure Westeros' soon-to-be-king is going to need a change of sheets in the morning. (And I was right. All Margaery needs to do is be in the same room.)

We end King's Landing with Jaime giving his Valyrian steel sword to Brienne in exchange for her searching for and protecting Sansa. Brienne agrees and then is introduced to her new traveling partner, Podrick. Brienne is against the idea of a traveling companion but I assume during some lonely night in the woods Brienne will learn the true benefits to having Podrick around. Before departing Brienne names her sword Oathkeeper. (That's the name of the episode!) I'm not crazy about the name but it beats Widow's Wail.

Littlefinger's Creepy Ass Boat
Sansa is not entirely sure Baelish is on the up-and-up. Good for her. She wants to know where she's being taken and Littlefinger tells her they're headed to the Vale of Arryn to see her not-at-all-crazy Aunt Lysa. Oh, and he totally admits to being a part of the plot to kill Joffrey. So there's that.

Sansa wants to know what motive Baelish would have to aid in the murder of Joffrey. Baelish pretty much says it keeps people confused and was a good will gesture to a new ally. What does Littlefinger want in the end? Everything, of course! (And I assume included in “everything” is banging Sansa…nightly…while he calls her Catelyn.)

The Wall
More sword practicing! This time it's Jon Snow showing the recruits how it's done. One of the recruits, Locke (not of smoke monster fame), actually knows how to fight. He and Jon Snow bond. I wonder if Sam is jealous? [UPDATE: I generally don't read up on the episode until after I write my review and so now I've discovered that I totally missed out on the fact that, unfortunately for Jon Snow, Locke is one of Roose Bolton's men. Hey, I've never claimed to be the sharpest tool in the shed!] [UPDATE TO THE UPDATE: I'm sorry, that's a lie. I have claimed that....often....and probably still will.]

Acting Captain Thorne is unimpressed with the sword practice. He reminds Jon snow that he's a steward and thus should do more stewarding and less swording. Afterwards, seedy underling Janos Slynt tells Thorne that Jon Snow is rising fast within the Night's Watch and if Acting Captain Thorne isn't careful he's not going to be acting as captain much longer. So it's decided that letting Jon go north of the wall to find the mutineers at Craster's Keep wouldn't be all bad...especially if it meant the end of Jon Snow.

Sam laments to Jon that he shouldn't have left Gilly in Mole's Town. Where was that thought process last episode? Jon doesn't seem overly concerned. He's thinking about attacking the mutineers. The topic of Bran then comes up and Jon deduces that Bran and company are most likely near Craster's Keep as well.

Jon is then summoned by Thorne. He's told he's allowed to go to the North but can only take volunteers with him. Jon seems to get a healthy amount of volunteers and, wouldn't you know it, his new friend Locke is one of them! Never saw that one coming.

Craster's Keep
The mutineers are having a grand old time. There's cursing, drunkenness, drinking from the skull of your former captain and, of course, raping. All class, these people. It turns out that the last Craster baby is born and it's a boy. Karl, the leader of the mutineers, thinks he's supposed to kill the baby boy and is totally up for it. Who hasn't wanted to plunge a knife into an innocent, wide-eyed infant freshly born into this world? However, satiating his infanticidal lust will have to wait because he learns that he's supposed to offer the baby to the White Walkers. No biggie.

The baby's cries are heard by Bran and crew who are indeed near Craster's Keep. Bran wargs his direwolf to check things out. He sees a caged Ghost before falling into a pit. Way to walk your dog into a trap, Bran. Summer's gonna be pissed!

Bran and crew go to investigate further where they are promptly captured by the mutineers. Sheesh, you'd think they were a group consisting of three kids and a dullard. Oh, wait. And now said dullard is changed up, taunted and stabbed and it's very sad because who doesn't think Hodor is awesome?

The leader quickly deduces that Bran is highborn but Bran's lips are sealed as far as his true identity is concerned. Karl quickly unseals Bran's lips by sticking a knife in Meera's neck. So the mutineers find out he's Bran Stark and that Jon Snow is his brother. I'm not sure what they plan to do next but I'm not holding out hope it'll be for the greater good.

Way the hell north
A White Walker on a creepy zombie horse is carrying the baby boy. The White Walker places the child on a pedestal (literally, not figuratively). Then a creepy shaman White Walker picks the baby up and touches his forehead. And that, kids, is how baby White Walkers are born.

Other Thoughts
Apparently I've been misspelling Jaime in my reviews as Jamie. This is as good a time as any to mention that I hate the names in Game of Thrones. Don't be surprised if at some point I resort to just using vague descriptions.

So Daenerys keeps conquering these cities but then she leaves. Who is left in charge?

I'm still confused why the masters at Meereen were nailing child slaves to mile markers.

I wonder how the Margaery and Tommen scene would have played for audiences if the genders were reversed? Then again, we kind of did see it with Baelish and Sansa.

So, it sounds like Littlefinger made an alliance with the Tyrells and together they plotted to kill Joffrey? This only surprises me because I figured the Tyrells would at least wait until Margaery bore a son before offing Joffrey. But maybe the Tyrells were confident Margaery could woo Tommen and/or were worried what Joffrey might do to Margaery before she had a chance to produce an heir.

So the poison was in (or simply was) a stone on Sansa's necklace. But how did that poison get into the pie or wine?

You know, I started my nudity counter because I thought it would be silly fun. But so far the majority of the nudity has come in the form of sexual assault and that's decidedly not fun.

Karl is obviously completely despicable. Yet, he doesn't want to kill Ghost because...reasons?

So White Walkers only allow males into their fold? Who do you think your are, Augusta National Golf Club? Get with the times!

Bronn: He hated the little twerp, sure. But, who didn't?

Tyrion: Sansa's not a killer. Not yet anyway.

Podrick: I won't slow you down sir...m'lady.